How can the markets possibly favor USC over Utah? (Spread is 3.5 points at noon on Thursday, October 22nd.)

Utah has an unblemished 6-0 record and rank of 3rd in the AP poll. They demolished Oregon 62-20, and their season opening win over Michigan looks better every week with the improvement of the Wolverines.

In contrast, USC is a mess. Their 3-3 record only tells part of their story. Coach Steve Sarkisian couldn’t stay sober on the job and got fired. Even when he was around, USC scored 12 points against Washington.

The Power Rank seems to agree that Utah should win. On my predictions page, I list the Utes as a 2.5 point favorite with a 57% win probability.

Not so fast on the Utah hype

However, this public prediction is based on team rankings that use the margin of victory in games to evaluate teams. I also do calculations based on yards per play, and this tells a different story about Utah.

Let’s look at how Utah has fared in terms of yards in their 6 games.

Utah had a better efficiency than their opponent against only Oregon and Arizona State. Note that this evaluates their defense as well as offense since the defense determines yards allowed to the opponent.

Also, Utah gave up 5.7 yards per play to Fresno State, a terrible offense that ranks 124th of 128 teams in yards per play this season. Most of these yards probably came in garbage time, but that’s still embarrassing.

How Utah matches up with USC

Utah’s defense is solid but not elite. In my rankings that take yards per play and adjusts for schedule, Utah ranks 24th and will find it difficult against USC’s 9th ranked offense.

On offense, Utah’s Devontae Booker gets the headlines. However, he averages 4.9 yards per carry, more than 3 yards per carry less than LSU’s Leonard Fournette. Utah’s rush offense ranks a pedestrian 68th in yards per carry (numbers do not include sacks).

Members of The Power Rank have access to my ensemble predictions that combine a number of different predictions, including calculations based on points per game and yards per play. This prediction favors USC by 3.2, suggesting no value for either team in the markets.

Each week, I send my analysis and a sample of member predictions to the email list. This article is a sample of the analysis.

To sign up for this free service, which goes out on Friday afternoons at 2pm Eastern, enter your best email and click on “Sign up now!” 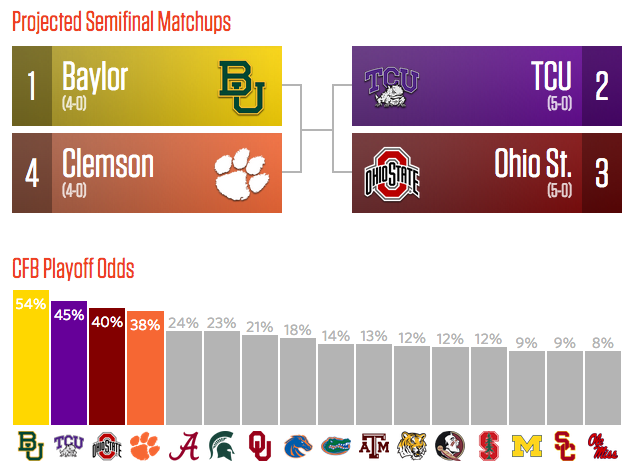 Each week, I calculate the probability that each team makes the college football playoff. You can find these numbers over at Bleacher Report along with my analysis.

This week, I wrote about how Utah is overrated. J.B. Long of the Pac-12 Network was nice enough to tweet it to his followers, which brought this backlash from Utah fans.

@thepowerrank @BlackoutUte @BleacherReport this guy is an idiot and his reasoning is terrible.

Utah fans are right up there with Auburn fans for internet etiquette. Gotta love the passion of college football fans.

To check out my college football playoff probabilities after week 5, click here.

Let’s look at a coaching resume. The coach has been with his present team for the last five years, producing win totals of 11, 11, 12, 8 and 9. Even without a ten win season the last two years, this team finished a very respectable 25th and 11th in the Power Rank. With a 6-0 start to the current season, the coach has won 56 of 71 games, a 72 percent winning percentage. In addition, he has one conference and one BCS national championship to his resume. While the lone conference championship seems paltry, it’s only because a team from this conference has won the national championship 4 of these 5 years. So how can a fan base possibly want to fire this coach?

The coach is Les Miles of Louisiana State (LSU), a team in the Southeastern Conference (SEC). People give two reasons for wanting him fired. The first is poor clock management. The final 30 seconds of last weekend’s game against Tennessee provides a perfect example; this video show how only a Tennessee penalty for too many men on the field saved LSU from an ugly loss. It’s tough to make a decision on a coach when he’s dealing with 18 to 22 year old kids, particularly when practice time is limited in the name of “getting an education.” So let’s consider the second reason people can’t stand Miles: luck. In the year of his national championship, the top two teams in the BCS standings both lost the last weekend of the season, opening up a spot for a two loss LSU team in the national championship game.  But the best example of Lucky Les comes from this Saturday’s game at Florida. With about a minute left and down 29-26, LSU faced a 4th and 2 at the Florida 35. LSU ran a fake field goal play in which the holder flipped the football over his head to a streaking kicker. The football bounced off the turf and right into the hands of the kicker. The bounce was so perfect that the kicker never broke stride and scurried the two yards for a first down. With a less perfect bounce, the Gators would have easily stuffed the play. In the remaining time, LSU marched down the field and scored a touchdown to win the game.

Two weeks, two “lucky” wins for LSU and Les Miles. It’s pretty easy to think he has signed a pact with the devil, as multiple people have suggested over the last week. Here at the Power Rank, we have a different perspective. Let’s assume Les Miles had no control over the two extra Tennessee players or the exact trajectory of the flipped football. These two lucky plays were random, so they could have happened in any game at any time. Suppose Miles gets 10 breaks over the last five years. If these 10 breaks are random, their distribution in time might look like this.

To the human eye, it doesn’t look random, especially since the two points furthest to the right are almost on top of each other. But these numbers are random, produced by the same piece of computer code used in my statistical physics research. Each of these ten points had the same likelihood of landing anywhere along that line. The human eye sees patterns in randomness.

So make your own decision on the Miles brand of clock management. But when it comes to luck, remember that streaks of good fortune can result from randomness. In the most recent college football rankings, LSU comes in at 21st, a respectable position but certainly not where one expects the SEC champion. There is a lot of football left to be played, a lot of luck yet undetermined.

1. Nebraska (4-0) 31.38. Thursday’ game at Kansas State was the most exciting second half blow out ever. When Nebraska got the ball, it was only a matter of time before they ripped off another long play for a touchdown. Gotta love the DVR; fast forward through Kansas State possession, watch Nebraska explode. With this decisive road win, the Cornhuskers deservedly take the number one spot. Isn’t this more fun than the AP poll?

15. Stanford (4-1) 15.15. The Cardinal faithful were sweating at the prospect of losing to USC because of a mixed extra point. USC took a late one point lead because of the earlier gaffe. But in the remaining minute, Stanford marched right down the field and kicked a game winning field goal. However, they still drop in the Power Rank for letting a weak team hang around. Told you these rankings weren’t fixed.

17. San Diego St. (2-2) 14.51. The Aztecs lost a close game on the road to BYU and continue to hold on to their high ranking. Is this a team that might give conference powers Utah and TCU a run for their money? If they can pull out a win against Air Force at home this week, it might be time to start believing.

20. Utah (5-0) 13.44. If I had more time, I would tell you the last time a non BCS school went on the road to a BCS school and scored 68 points. That’s not a typo: 68. After a slow start, Utah blew away Iowa State on the road. For their fine efforts, they dropped one spot in the AP rankings because of LSU’s last minute heroics. This week might be the first and last time I mention the AP poll.