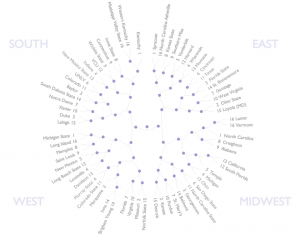 With every passing day in March, college basketball heats up that much more. Basketball junkies like us only have 16 days left until the committee announces the field of 68.

However, we couldn’t wait that long to see who would win the tourney. We took Jerry Palm’s bracket predictions from yesterday and calculated the win probabilities for each team to advance through each round. These odds are based on our college basketball team rankings, which give a win probability for each game.

We show these numbers in our interactive bracket (click here to open it up in a new tab). To unveil the win probabilities for a team to advance, hover over the team name. To discover the odds that a team wins a game, hover over the circle for that game.

Last year, Amy Nelson of SB Nation made this awesome video about our analytics and this interactive visualization.

You should draw your own conclusion from this year’s numbers. These 3 things jumped out at us.

Florida has largest chance of winning the tourney

What? The Gator team that has dropped 3 games in a weak SEC conference? The team that’s only 11th in the AP poll has a 12.8% chance of winning the tourney?

Florida is the top team in our college basketball rankings. Despite being more than a point and half better than even Indiana, they have lost 5 games this year because of their love affair with the 3 point shot. Over 40% of their shots come from behind the arc. Most nights, they shoot pretty well, hitting 38.4% of their 3’s for the season. However, they can also die by the 3.

Florida’s chance at winning the tourney would be even higher had Palm not put them in the Region of Death. The East region has Duke, Michigan and Syracuse in addition to Florida, all top 10 teams in The Power Rank. The committee takes geography into account when determining the bracket. Since most of the best college basketball teams are east of the Mississippi River, the bracket has regions of vastly differing strength.

Pittsburgh in the West

This unbalanced bracket opens the door for Pittsburgh, the 5 seed in the West. After an uncharacteristically poor season last year, the Panthers have surged back on the national scene with coach Jamie Dixon. Ranked 12th in The Power Rank, they have a 10.9% chance of making the Final 4 out of the West. It’s not as high as Gonzaga’s 25.3% chance, but it’s higher than most “experts” will give them.

The Madness of March starts that first Thursday (or Friday on a weird year) of the tourney when higher seeded teams get upset by double digit seeded teams. In Palm’s bracket, Oregon and Butler look most vulnerable.

Oregon has been overrated all year, rising to 19th in the most recent AP poll but only 49th in The Power Rank. They got exposed last night at Colorado, losing by 23. Wichita State has a 55% chance of upsetting Oregon in the first round.

Most people remember Butler for their consecutive championship game appearances from a few years back. However, this year’s team doesn’t have the same defensive toughness as those teams. Middle Tennessee State, who was our highest ranked team not to make last year’s tourney, has a 51% chance of knocking off Butler in the first round.

What jumps out at you in our numbers? (Here’s that link to the interactive bracket again.) Let us know in the comments.

When the field for the NCAA tournament was announced this year, The Power Rank unveiled its interactive bracket. The bracket exemplifies our mission in sports analytics. At its core, the bracket shows the 416 win probabilities for each team in each game. Will your team win? This is our answer. Moreover, the bracket displayed the tournament structure in an elegant, symmetric tree structure that could only come from the mind of graphic designer, Angi Chau, that doesn’t follow sports. Hover over the nodes to get win probabilities for a game. Hover over team names to get the probabilities for advancing to each round.

Fortunately, sports fans also seem to like advanced analytics and data visualization. The bracket spread rapidly through social media, and I soon got a call from Amy Nelson at SB Nation. She just launched Full Nelson, a series of weekly sports documentaries, and wanted to do one on our March Madness analytics. Of course, we were thrilled. She asked me to fill out a bracket for her pool based on our numbers.

How Amy’s bracket was picked. Winning a NCAA tournament pool goes far beyond the probabilities in our interactive bracket. Consider a bracket in which the higher ranked team in The Power Rank won each game. This year, our numbers had Kentucky as the highest ranked team. A bracket with Kentucky as champion would fare well in the pool but not win. People like Grandma Feng, who doesn’t know that a basketball is round, also picked Kentucky to win but also had Ohio and North Carolina State making the Sweet Sixteen. She wins the pool based on shear luck. The larger the number of entrants in a pool, the more likely someone makes some startling picks that win the pool.

In a big pool, one needs to look for undervalued teams. The Power Rank gave Ohio State almost a 12% chance to win the tourney, the second highest likelihood after Kentucky. If you pick Ohio State and they actually win, your bracket picks up 63 points (1 for the first round, 2 for the second round, all the way up to 32 for winning the championship game). More importantly, it’s unlikely that many other people picked Ohio State as the champion. On Yahoo, only 4.5% of brackets did this. In a pool with 100 entrants, 4 people will pick Ohio State on average. Your bracket only has to do better that 4 other people in the early rounds.

For more details about picking an optimal bracket, see this excellent article by Galen Hall. I used these concepts to pick Ohio State for Amy, a scene that shows up in the documentary (see below). However, picking the bracket in general was a frustrating experience. Ideally, one should put some math behind these concepts and optimally pick a bracket based on pool size. For example, an optimal bracket probably would not have Michigan State in the Elite Eight, simply because of the four other top 20 teams (Memphis, Saint Louis, New Mexico and Louisville) in that part of the bracket. But this additional analytics will have to wait until next year.

The roller coaster ride of following a bracket. Amy’s bracket did pretty poorly after the first weekend. For example, it had Kentucky, Wichita State, UNLV and Duke in the Sweet Sixteen from the South region. Only one team, Kentucky, made it that far. When we shot the final scenes for the documentary, we knew the bracket was suffering. I even mention that we didn’t pick the bracket to win the first weekend. A week later, the bracket surged, sporting 3 (Kentucky, Ohio State and Kansas) Final Four teams. Amy would pick up another 64 points, the total points available in the first two rounds, if Ohio State beat Kentucky in the national championship game. With the only bracket with Ohio State as champion, she would easily win the SB Nation pool. However, this scenario had only a 18% chance based on our numbers. Even after picking 3 Final Four teams, the odds of winning a competitive bracket are still rather small.

In the semifinal game in New Orleans, Ohio State faced off against Kansas. While the Jayhawks were down most of the game, their defense took Ohio State out of their half court offense. Kansas coach Bill Self might be the next Coach K, a leader that can motivate his players to a higher intensity level. A late game surge, capped with an off balanced layup that 6′ Elijah Johnson somehow got over 6’8″ Jared Sullinger with a minute to go, sealed the victory for Kansas. Amy wasn’t winning the pool with this bracket. She finished 10th out of 23 people. However, picking Ohio State was still the best strategy for this pool with 23 participants. Had she picked Kentucky over Ohio State in the championship game, she would have finished 4th at best. The top seven brackets all had Kentucky as the winner, and the winning bracket had Ohio and North Carolina State in the Sweet Sixteen. Go Grandma.

Why March Madness is like counting cards. But does that mean The Power Rank is worthless? No. Using our win probabilities, or maybe even those of Ken Pomeroy or Nate Silver, gives you an edge against the competition. It’s like counting cards in black jack. In the long run, people like Jeff Ma made a lot of money in Vegas based on a small edge against the dealer. Does that mean he won every hand? No. Did he win every time he doubled down on 11 against a 6 up card from the dealer? As he details in his book The House Advantage, no. You’re not going to win every March Madness pool using The Power Rank. And for those that believe in the power of numbers in the long run, the NCAA tournament is particularly frustrating since the opportunity arises once a year. But do you want to be Jeff Ma and have a movie made about you? Or do you want to be the person who keeps hitting on 17 expecting that 4?

Check out the Full Nelson episode on The Power Rank.

At last year’s Sloan Sports Analytics conference, I met Jeff Ma, the inspiration behind Bringing Down the House and 21, the movie. More than any other person at the conference, Jeff was interested in my academic approach towards ranking teams and projecting future outcomes. So when Angi Chau and I posted this interactive bracket for the NCAA tournament last week, I emailed Jeff about it. He was kind enough to post it Twitter, which brought it to Amy Nelson’s attention. Amy works at SBNation and just launched a YouTube channel. We got in touch by phone last Wednesday, and in less than 24 hours after that, she was in San Francisco to do a short documentary on The Power Rank and our web of win probabilities. This episode of Full Nelson is the result.