College football is a big business. The University of Texas made over $93 million in revenue in 2010, a season in which they went 5-7 and failed to make a bowl game. This excellent visualization from Bloomberg shows the revenue and profit of other major programs. With so much money on the line, athletic directors are desperate to find the superstar coach. So when a coach doesn’t work out, he gets fired. Here, we look at programs headed in a new direction with our offense and defense rankings. The visual shows the offensive and defensive ratings, which corresponds to the expected number of points scored or allowed respectively against average opposition. See the offense and defense rankings for numerical values of these ratings. Note we did not include teams like Southern Miss who had coaches leave for other schools or Ohio State who kept interim coach Luke Fickell within the program. 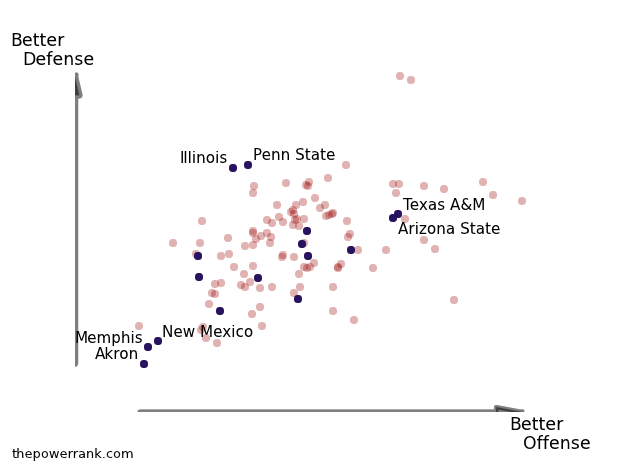 The visual shows three regions that stand out.

1. Teams terrible on offense and defense. These teams appear in the lower left corner. Not surprisingly, Akron, Memphis and New Mexico all decided to head in new directions with their program. New Mexico fired Mike Locksley in September, a long overdue move after two 1-11 seasons and one fist to the head of his receivers coach. The fourth team in the corner is Florida Atlantic, whose coach Howard Schnellenberger announced his retirement at the beginning of the season.

2. Teams with a strong defense. Illinois and Penn State stand out in this visual because of their strong defenses. Joe Paterno lost his job over the child sex abuse scandal at Penn State, a shocking and sad state of affairs. The Nittany Lion defense ended the regular season ranked 4th. Illinois let Ron Zook loose after dropping 6 games to end the season, including a 27-7 loss to 69th ranked Minnesota. They finished the season with the 5th best defense after our adjustments for strength of schedule, but an anemic 97th ranked offense sunk the Illini this season.

3. Teams not so terrible on offense and defense. The two strangest firings according to TPR are Mike Sherman at Texas A&M and Dennis Erickson at Arizona State. Earlier, we devoted an entire post and visual to the folly of Sherman’s firing. Not only had his program improved from last year but the Aggies have severely struggled the year after replacing a head coach this decade. However, expectation were high in College Station, and Sherman posted a 6-6 record and lost to rival Texas. Arizona State controlled the Pac-12 South as late as November before 4 straight losses got Erickson fired. TPR has ranked the Sun Devils in the top 20 both of the past two season despite only 9 wins over bowl subdivision teams. So Erickson’s teams were a bit unlucky. However, his team also led the nation in penalty yards this season, and silly penalties prevented his teams from winning. Last night in the MAACO Bowl, an Arizona State defender picked up a personal foul after hitting a Boise State player after he had crossed the goal line. The touchdown made the score 42-10 Boise State. It was a fitting end to Erickson’s tenure.

It was a tough season in College Station. Texas A&M finished with a 6-6, good enough to get head coach Mike Sherman fired. But on closer inspection, the Aggies were much better than their .500 record suggests. Here are the 6 losses they suffered this season, sorted by The Power Rank.

Texas A&M only lost close games to highly ranked opponents. Since our algorithm considers margin of victory and strength of schedule, we rank the Aggies at 13th, 13.2 points better than the average bowl subdivision team (this year, Washington State). They suffered from playing in college football’s best conference. Big 12 teams had an average rating of 9.32, better than the 8.75 of the SEC. However, coaches are judged by wins and losses. Sherman lost his job when Texas quarterback Case McCoy scrambled for 25 yards to set up a game winning field goal.

However, the folly of firing Sherman becomes more clear if we look at Texas A&M’s year end rating since 1998. 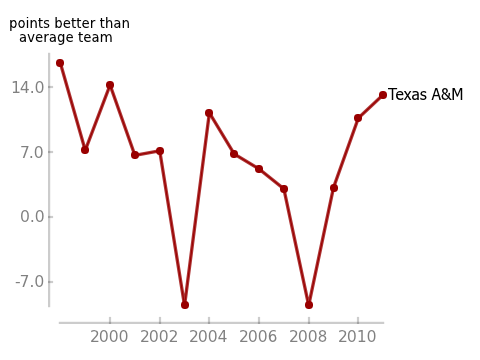 First, Texas A&M was trending upward this season despite the poor record. While a change from 9-4 to 6-6 usually suggests a worse team, The Power Rank thinks otherwise. Second, those two huge downward spikes came in the first year of a new head coach. The Aggies fired record setting coach R.C. Slocum to bring in Dennis Franchione at the start of the 2003 season. They finished 4-8 and got hammered 77-0 at Oklahoma. Sherman took over from Franchione in 2008 and posted a… you guessed it, a 4-8 record. Texas A&M lost to Arkansas State at home that year.

In 2012, Texas A&M will join with SEC with new coach Kevin Sumlin, who recently led Houston to the brink of an undefeated season. The Aggies will lose quarterback Ryan Tanneyhill, top rusher Cyrus Gray, and two of their top three receivers. On defense, they need to replace much of the defensive line. For an impatient athletic department, it’s going to be a long season in College Station.