How will Clemson match up with Alabama in the College Football Playoff championship game? Will the result be any different from last year, when Alabama claimed their 4th national title in the last 7 years?

Let’s count down the top 5 insights that will affect the outcome of this game. Yes, we’ll revive the Star Wars analogy from last year’s preview.

5. Clemson dominated the line of scrimmage in Part I

No. Clemson clearly won the line of scrimmage. I’ve never seen this type of domination over Alabama, as the Clemson defensive line in particular made a mockery of attempts to block them.

Despite this edge in the trenches, Clemson lost due to numerous blown coverages in a secondary that had excelled all season. Alabama also recovered an on side kick to provide an extra possession, and it was enough to hold onto a 5 point win.

Will Clemson dominate the line of scrimmage again in Part II against Alabama? Probably not.

However, consider that Clemson’s defense has put 4 and 7 starters in the 2015 and 2016 NFL drafts, respectively. Despite these losses, they continue to dominate, as they allowed 4.56 yards per play, 4th best in the nation this year.

Clemson QB Deshaun Watson has many solid receivers, but none more talented than Mike Williams. Watson has targeted Williams 129 times this year for 9.8 yards per target.

Many expect Williams to be a first round NFL draft pick. He can improve his draft stock in the championship game as he will face Alabama cornerback Marlon Humphrey, another projected first round pick.

We’ll put numbers behind the transcendence of this Alabama defense later. But for now, let’s focus on the secondary in the semi-final game against Washington.

Dante Pettis and John Ross had terrorized Pac-12 defenses all season, as Washington had a potent pass offense had gained over 8.5 yards per attempt heading into the Playoff. (Numbers include sacks unlike traditional college football statistics.) Against Alabama, these top receivers had difficulty getting open, as Washington threw for a meager 2.6 yards per attempt.

Clemson’s Williams might have more talent than any of Washington’s receivers, but we’ll see whether he can get open against the Alabama secondary.

3. Can Jalen Hurts lead a come from behind victory?

Before the start of this season, Nick Saban told ESPN “I don’t care who we start at quarterback. He ain’t going to be that good.”

True freshman Jalen Hurts won the job, and he has excelled beyond all expectations. Hurts has completed 64.7% of his passes (college football average is 60%) as well as gained 6.2 yards per carry as a dual threat quarterback.

But how will the freshman play if he must bring Alabama back from a late game deficit? He hasn’t face that situation yet this season.

My member numbers favor Alabama by 9.4 points. However, the clear favorite doesn’t always have a late game lead.

What happens when Alabama no longer gets points from the defense or special teams? They have scored 15 non-offensive touchdowns this season, although randomness has certainly played a role in this astounding number.

If Alabama faces a late game deficit, Hurts will have to throw the ball. This plays right into the strength of the Clemson defense, as they have the 3rd best pass defense by my adjusted yards per attempt.

Then if Clemson doesn’t make the same blunders in the secondary as last year, they could very well pull off the upset.

In my preview of last year’s game, I made a Star Wars analogy for Alabama.

To see how the Alabama defense match ups with Clemson’s potent offense, I use data visualization to plot opposing units on the same line. Better defense appear further to the right to facilitate comparisons with the opposing offense. The unit that appears further to the right is predicted to have the advantage.

The visual shows how offense and defense match up in Alabama vs Clemson, Part II.

The top chart shows the expected dominance of Alabama’s defense over Clemson’s offense.

The bottom visual shows an even match up between Alabama’s offense against Clemson’s defense.

In keeping with the Star Wars theme, I said the following about Clemson QB Deshaun Watson in last year’s preview.

Watson was spectcular against Alabama last year, throwing for almost 8 yards per attempt, a number that accounts for sacks unlike traditional college football statistics. This prompted Nick Saban to call Watson the best college QB since Cam Newton.

If Watson was Luke Skywalker in the New Hope last season, he is now Luke in Return of the Jedi this season. He’s had his full training from Yoda, and he won’t surprise anyone with a big game against Alabama.

Can Deshaun Watson blow up Alabama’s death star? He must have a spectacular game for Clemson to convert their 24.5% chance for the upset. 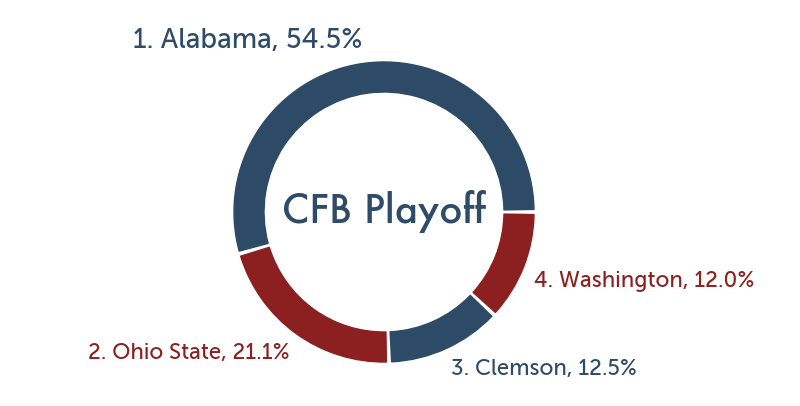 Let’s not coronate Alabama champion just yet. Over on Bleacher Report, I wrote about the College Football Playoff from an analytics perspective.

Alabama is the clear favorite, and I even like their chances to cover two touchdowns against Washington in the first semi-final.

Ohio State and Clemson features some interesting match ups, as both teams have their strengths on offense and defense.

I had the honor of having Mike Craig on the Football Analytics Show this week. Mike has made a living for ten years investing in the sports markets, and he’s been my partner in running the college football prediction service the past three years.

On the podcast, we discuss the following:

In 2008, I got started with team rankings that take margin of victory and adjust for strength of schedule.

Around 2011, I did the same adjustments for schedule on yards per play, which let me rank offense and defense.

This year, I ventured into markets to use closing point spreads to rank teams.

Over on Football Study Hall, I wrote about these market rankings. Did the playoff selection committee get it right?

The Top 25 College Football Teams by the Markets

I discussed these rankings on the podcast a few weeks back. These are updated numbers, as I found I was missing some ACC games that affected Clemson’s rank.

This week’s episode of The Football Analytics Show dives into the first week of bowl season and a stand out game from week 15 of the NFL. I discuss the following:

To listen to the podcast, click on the play button.