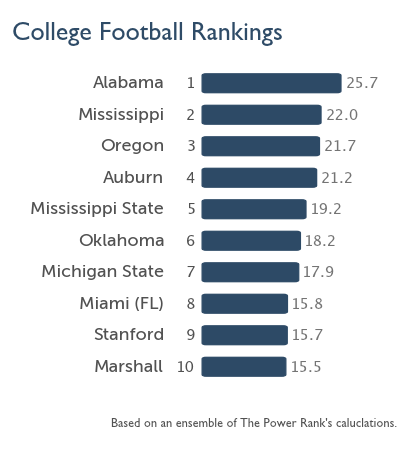 Last week, I wrote about how neither Florida State nor Notre Dame would make the college football playoff. One piece of evidence was that Florida State had less than 50% chance to win at Miami by my numbers.

People called bullshit on that one. A commenter said:

If your numbers say Miami over FSU, you ain’t got good rithm

I think he meant algorithm.

It’s easy to understand why people doubt numbers that predict Miami over Florida State. Miami has lost to Louisville, Nebraska, and Georgia Tech. They start a true freshman, Brad Kaaya, at quarterback.

Breaking down Miami into offense and defense

Before last night, Miami had the 12th and 14th ranked offense and defense respectively. While Kaaya will probably make freshman mistakes, he has weapons like Duke Johnson to break off big plays. The defense is solid against both the pass and rush.

These adjusted yards per play numbers also predict a point spread for any game. Before last night, yards per play predicted a 11.7 point win for Miami at Virginia Tech.

That margin was probably too large. This season, I’ve been working with Mike Craig to aggregate many different predictions for a better ensemble prediction. In addition to yards per play, we use calculations based margin of victory and data from the markets. The public predictions on The Power Rank is just one member of the ensemble.

This ensemble predicted a 1 point win for Miami over Virginia Tech. The line opened favoring Virginia Tech by 3 points before ending with Miami as a 2 point favorite.

Miami thrashed Virginia Tech 30-6 last night. The Hurricanes gained 6.61 yards per play compared with 4.44 for Virginia Tech. Miami led 24-0 at half without the benefit of any Virginia Tech turnovers.

It doesn’t always work out so nicely in the random world of college football. But yards per play has an amazing power to identify undervalued teams at this point in the season.

Let’s at some other ensemble predictions for this weekend.

Mississippi will beat LSU by 3.3. The teams will score 47.5 points.

Life is never easy in the SEC West. Ole Miss is undefeated with a huge win over Alabama. They attempt to continue their fairy tale season at LSU on Saturday.

Even though LSU has lost twice already, they are still solid on both sides of the ball. The Tigers rank 35th and 32nd on offense and defense respectively in my adjusted yards per play.

Ole Miss has a lights out defense ranked 2nd. On offense, they have struggled to run the ball, so they rely on the arm of quarterback Bo Wallace. Their passing game ranks 14th in adjusted yards per attempt.

Grantland asked me to predict the Heisman winner for their mid-season predictions article. These predictions make me uncomfortable because my analytics do not directly apply.

I picked Wallace to win the Heisman. He has a great defense to help win games, and he has increased his completion percentage 66% this season. (The blond hair probably helps as well.) If my prediction has any chance of coming true, Wallace must have a Heisman moment at LSU to win the game. Perhaps a leap over a defender for a go ahead touchdown?

Matt Hinton of Grantland had a nice article on Ohio State QB J.T. Barrett. The freshman has been impressive recently, and some think he’s better than the injured Braxton Miller. With only six games played for Barrett, that’s absurd.

It’s easy to get excited about a small sample size, especially when two of Ohio State’s opponents were Rutgers and Cincinnati. Remember when Texas A&M freshman Kenny Hill destroyed South Carolina in their first game and jumped to the front of Heisman lists? Hill has stumbled against the elite defenses in the SEC West.

Barrett faces a Penn State defense ranked 16th, a unit which will make it difficult for Barrett to put up the same numbers he did against Cincinnati and Rutgers. Ohio State probably wins this game at Happy Valley, but it won’t be easy.

Oregon will beat California by 11.8. The teams will score 75.8 points.

Offensive linemen usually don’t get much credit. However, tackle Jake Fisher got props from CBS writer Rob Rang for jump starting Oregon’s offense when he returned from injury against UCLA.

I didn’t see that game, but Oregon’s offensive line looked terrible against Arizona. And I like it when the big guys up front get credit.

Oregon should take care of business against an improved California team.

Michigan State will beat Michigan by 14.4. The teams will score 45.8 points.

For Michigan to capitalize on their 15% chance to beat Michigan State, quarterback Devin Gardner must put on the superman cape that he lost after last year’s Notre Dame game.

Sample of other ensemble predictions

Members of The Power Rank have access to these ensemble predictions and my yards per play calculations. To learn more, sign up for the free email newsletter. Just enter your best email and click “Sign up now.”