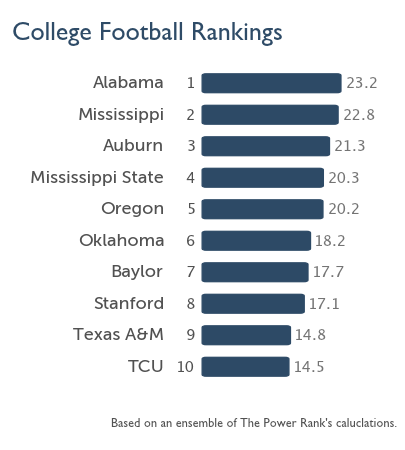 The Power Rank’s top 10 as of Oct 16th, which doesn’t include Florida State or Notre Dame.

You expect the winner of the Notre Dame and Florida State to make the first college football playoff. It might be the easiest prediction of the season given their unblemished records and the recent track record of these programs.

Florida State won the national title last season and returns Heisman winning QB Jameis Winston. Only an incredible run of wins by Mississippi State has knocked them from first in the AP poll.

Notre Dame played in the national championship game two years ago. Now Everett Golson, the quarterback that led the Fighting Irish during their championship run, has returned after getting removed from school for year. Notre Dame seems like an elite team again.

The past few season has brought a return to former greatness for both programs. This visual shows a 30 year history of Florida State. 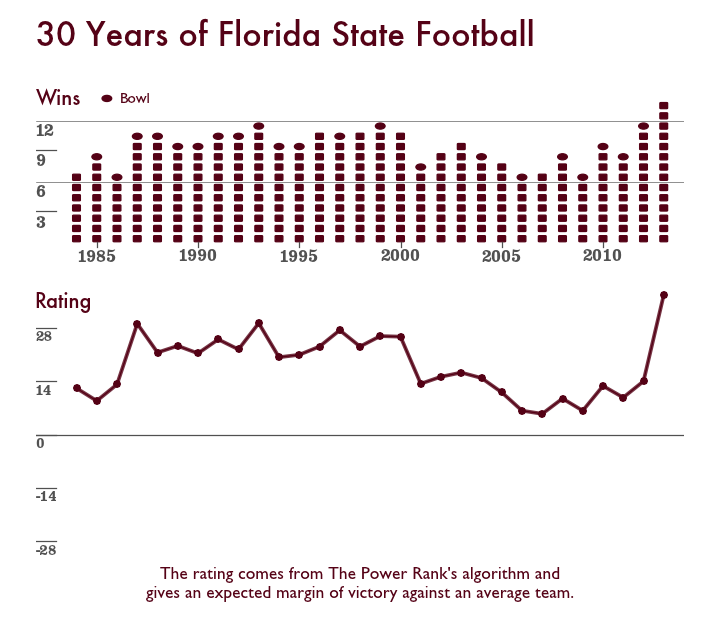 The bottom panel shows a rating, or an expected margin of victory against an average team from The Power Rank’s algorithm.

Former Florida State Bobby Bowden took the program to incredible heights before regressing in the new millennium. Current coach Jimbo Fisher had the Seminoles on an upward trajectory before making a huge leap last season.

Notre Dame has also enjoyed some terrific seasons over the last 30 years. 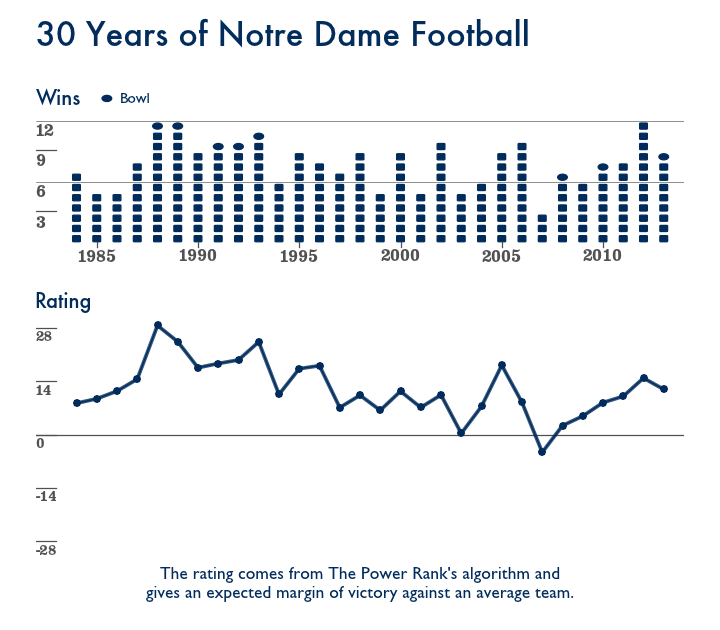 Former coach Lou Holtz capture the national championship in 1988 and had amazing teams in 1989 and 1993. The program went in decline after his departure in 1996 except for a one year blip in 2005 (Charlie Weis’s first year with Tyrone Willingham’s players). Current coach Brian Kelly had the Fighting Irish on the rise until a slight drop last season.

Despite this return to greatness for these programs, neither Notre Dame nor Florida State will make the college football playoff this season. Let me explain.

No, my pessimism towards Florida State isn’t based on the high likelihood Jameis Winston gets kicked off the team. The news cycle has brought us constant stories about his problems over a rape case and whether he took money for signing autographs.

Florida State’s offense has been good this season. The Power Rank takes yards per play and adjusts for strength of schedule through a proprietary algorithm to rank offense and defense. These rankings put the Seminole offense at 6th in the nation. They might even be better, as this calculation includes the Clemson game in which Winston didn’t play.

Florida State’s problems are on defense. In the past two season, this unit has ranked in the top 5 by my adjusted yards per play. However, they have dropped to 35th this season.

There are many possible reasons for this decline. Florida State lost tackle Tim Jernigan and cornerback LaMarcus Joyner to the NFL draft. Coordinator Jeremy Pruitt left for Georgia, who pitched a shutout at Missouri this past weekend.

The numbers single out the pass defense, which ranks 51st by yards per pass attempt adjusted for schedule. Florida State can’t generate a pass rush as they have sacked the quarterback on 4.2% of pass attempts compared to a 6% FBS average.

To confirm these numbers, I watched the first half of Florida State’s game against Syracuse. The Seminoles only pressured the quarterback three times on 18 pass attempts. None of these pressures led to a sack, although one did result in an interception.

With this struggling defense, Florida State becomes vulnerable to a few of their conference foes. (Well, they were also vulnerable 2 seasons ago when they lost at North Carolina State.) My best predictions at The Power Rank come from aggregating a number of predictions based on stats such as margin of victory and yards per play.

These ensemble predictions make Florida State an underdog at Louisville (44% win probability) and Miami (38%). Louisville has the 2nd best defense in the nation, while Miami looks strong on both sides of the ball despite 3 losses already.

The Everett Golson story has been heart warming. The kid makes a mistake and cheats on a test. Notre Dame finds out and kicks him out of school, causing him to miss the 2013 season. Then Golson comes back and has led the Fighting Irish to a 6-0 record this season.

In addition, Notre Dame hasn’t played any quality teams except Stanford. They beat Stanford when converted a 4th and 11 for a go ahead touchdown when Stanford coach David Shaw inexplicably rushed 3 guys (no, this Stanford alum is not bitter. Not at all.). Notre Dame also won a strange 31-0 game against Michigan in which they had fewer total yards than Michigan.

Even if they beat Florida State, Notre Dame will find their remaining schedule difficult. My numbers have them as underdog at USC and Arizona State, two teams that have struggled this season. They also have a slim 51% win probability against Louisville at home.

Notre Dame at Florida State should be a fantastic game. The environment will be electric, the offenses will score points.

The best predictions at The Power Rank come from aggregating a number of different predictions. In collaboration with Mike Craig, we use my numbers as well as data from the betting markets and other trusted rankings. This ensemble method predicts a 9 point win for Florida State, which implies a 25% win probability for Notre Dame.

However, these are not two of the best five teams in the nation. Florida State might sneak back into the top 5 if their defense returns their level of play over the last two seasons. The numbers suggest Notre Dame is a solid top 25 team but nothing more.

Expect neither Florida State nor Notre Dame to end up in college football’s first playoff.