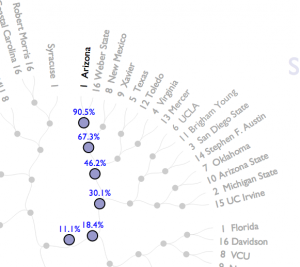 Do you find bracketology weird?

There’s an industry of people that predict how a committee will seed the NCAA men’s basketball tournament next month.

I get it. Fans want to know whether their team will make the tourney and where they’ll be seeded.

But isn’t the more important question how far your team will advance? Or whether they will win the tourney?

The odds of advancing in the tourney

For the last 2 years, The Power Rank has calculated the odds for each team to advance through the tourney. This starts with the college basketball team rankings, which imply a win probability for each game. The multiplication and addition of these numbers gives the odds for advancing through the rounds.

Usually, these results appear after the bracket is announced on Selection Sunday. However, I thought you might be interested in these results much earlier.

Let’s look at few features of these results.

Arizona tops my rankings, and they appear as a one seed in the bracket prediction. However, they have only an 11% chance to win the tourney. To put this in perspective, Kentucky had 16.5% to win the tourney in 2012.

The lower win probability for Arizona results from their rating, or a projected margin of victory against an average college basketball team. Arizona has a rating of 17.8, tops in the nation. However, this rating is more than a point lower than Kentucky in 2012 as they headed into the tourney.

These ratings will change before the tourney starts, but it looks like a more competitive tourney than ever.

The value in Pittsburgh

Pittsburgh had Syracuse on the ropes at home on Wednesday night. They held a one point lead with 4 seconds remaining. But then Syracuse freshman Tyler Ennis hit a dazzling 35 foot shot to win the game.

Pittsburgh got robbed of a big win, sending them down to a 7 seed in this project bracket. However, the Panthers are 16th in The Power Rank. They have a 2% to win it all.

Almost no one will pick Pittsburgh as their champion in your pool. If Pittsburgh does actually win, you stand an excellent chance to win the pool, even if it has up to 100 entries.

However, Pittsburgh was also a good value pick last season, with a 1.5% win probability as an 8 seed. They lost in the first round to Wichita State.

Also, I give advice on how to fill out your bracket when the actual bracket is announced. To get this information, sign up for my free email newsletter. Just enter your email address and click on “Sign up now”.