Recently, we started ranking games according to the strength of the teams and an excitement factor based on our predictions. When applied to this year’s Bowl games, the Holiday Bowl matchup between Texas and California came up 6th out of 35, just behind the Cotton Bowl game between Kansas State and Arkansas. While it might seem strange that a December 28th game between two 7-5 teams ranks so highly, the matchup has a high excitement factor. The Power Rank (TPR) predicts a 0.8 point victory for Texas in a close game, essentially a coin flip. In fact, the algorithm predicted a 0.3 point win for Cal prior to the start of Bowl season. It changed its mind after Arizona State’s 56-24 loss to Boise State last week, making Cal’s 9 point win over the Sun Devils less impressive.

Also, after a week of watching teams like Florida International and Marshall play in bowl games, the Holiday Bowl does not disappoint in the team strength department. While we mocked the AP poll for putting Texas 19th after their 3-0 start, the Longhorns made it as high as 21st in TPR. Losing 3 of their last 4 dropped Texas to 26th at the end of the regular season. Cal was 62nd after an embarrassing 17 point loss to UCLA . They ended the season 3-1, and their only loss was a 3 point game at Stanford in Big Game. This late season surge pushed Cal up to 28th at the end of the regular season, a big factor in making the Pac-12 our third rated conference behind the Big 12 and SEC.

To further break down this matchup, we look at our offense and defense rankings. 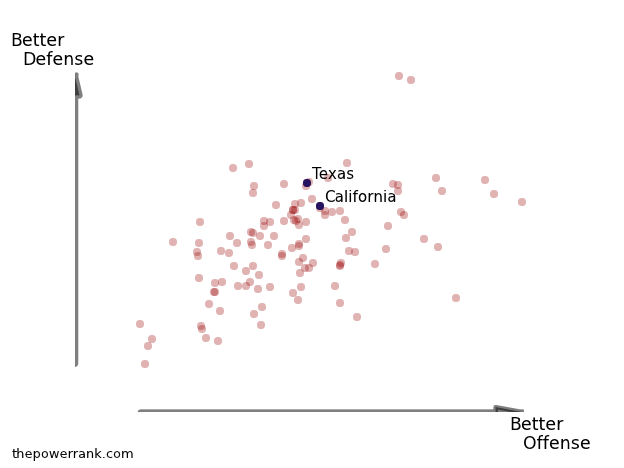 This visual is based on offense and defense ratings that correspond to the predicted points scored or allowed against an average opponent. (Click on offense and defense for the numerical values.) Texas has a better defense while Cal has the better offense. These rankings predict a 24.0-22.7 win for Texas, a defensive battle considering that a team scores 26.9 points per game on average. The 1.3 point margin of victory is similar to the 0.8 predicted by the team rankings.

These rankings point towards the Cal offense against the Texas defense as the most important matchup of the game. After watching his quarterback Zach Maynard struggle early in the season, Cal coach Jeff Tedford started calling more running plays in the last 4 games. The Bears racked up over 5.9 yards per carry in all but one of those games. This proficiency in the running game helped Maynard, who completed 67% of his passes and threw 5 touchdowns to 1 interception in those last 4 games. However, running the ball against Texas will not be easy, as the Longhorns only allowed 3.34 yards per carry, good for 18th in the country according to cfbstats.com. If Maynard can avoid the interceptions that plagued Cal early in the season, the Bears will stay in the game. If Maynard can find receivers Keenan Allen and Marvin Jones down the field, Cal can beat Texas.