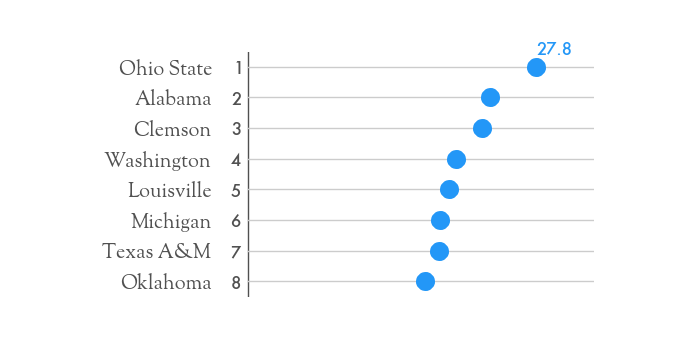 We’re five weeks into the college football, and it’s inevitable to overrate some teams. Four or five games is a small sample size.

Ohio State is one heck of a football program, but they’re most likely playing above their true skill right now. Remember, they returned only 6 starters after losing tons of talent to the NFL.

I’m starting to believe in Washington, who checks in at 4th this week. But their 44-6 win over Stanford is an overestimate of their true skill, as the Cardinal played their worst game since the Walt Harris era.

But how about Miami? The Hurricanes under new coach Mark Richt crack the top 10 this week.

Are they overrated? Maybe, but Miami always has talent with their location in one college football’s most fertile recruiting areas.

In addition, I’ve been working on new rankings based on closing point spreads from the markets. Miami ranks 23rd, which suggests the markets like this team as well.

And this Richt guy can coach. If his quarterback spikes the ball against Alabama in the 2012 SEC championship game, he might have won a national title over Notre Dame.

Miami might be a good football team this year. We’ll see as they play Florida State this week.

To check out the most current college football rankings, click here.