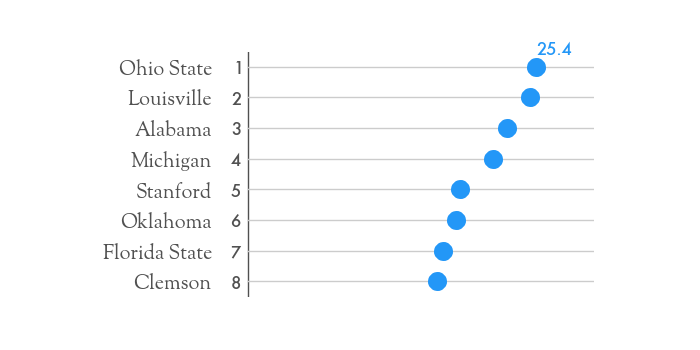 Careful what you wish for.

LSU fired Les Miles on Sunday. The Mad Hatter won 10 games a year in college football’s toughest division during his tenure as coach. The law of large numbers thinks that’s an impressive result.

Sure, LSU started 2-2 this season. Yes, the offense has looked awful, not just this year but even in 2011 in which LSU made the BCS title game.

But good coaches don’t grow on trees, and there’s no guarantee LSU will find a new coach that can keep the program at it’s current level.

Georgia fired Mark Richt last year, a coach that won 145 games in 15 years. The Bulldogs are struggling this year. They are 43rd in my most recent rankings after a 45-14 beat down at Ole Miss.

Richt landed on his feet at Miami, his alma mater. The Hurricanes destroyed a good Appalachian State team on the road this year and have risen to 9th in my current rankings.

And what about Tennessee? The program still hasn’t recovered after firing national title winning coach Phil Fulmer in 2008.

Careful what you wish for.