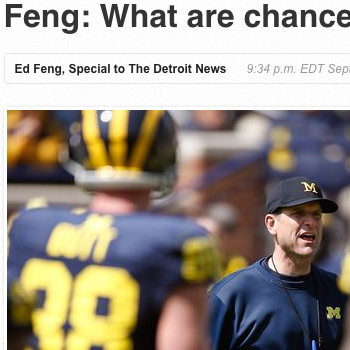 Over at the Detroit News, I used analytics to assign a preseason win probability for each team in the Big Ten East.

My favorite part of the article was questioning the dominance of Ohio State.

Before the season started, people acted like the Buckeyes were the greatest team in college football history. However, looking at their track record through analytics over the past 3 season reveals a different story.

Ohio State looked amazing against Virginia Tech in a revenge game from last season (Virginia Tech came to Columbus and won). Then they have looked putrid on offense against Hawaii and Northern Illinois.

I still think they’re one of the two best teams in the nation. But let’s not put them in the playoff just yet.

Michigan State and Michigan also have a chance at the Big Ten East title, with Penn State as an intriguing fourth option.