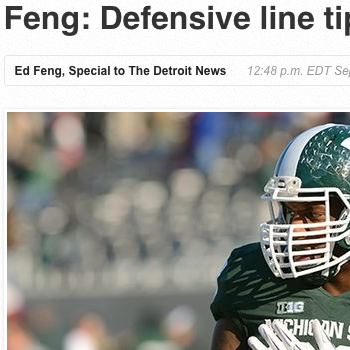 Over at the Detroit News, I previewed the Oregon at Michigan State game on September 12th, 2015.

Both defenses have issues in the secondary. However, I thought Michigan State’s elite defensive line would win the game for the Spartans. It was enough to overrule my numbers which gave an ever so slight edge to Oregon on the road.

The game couldn’t have gone better for me, as Michigan State won 31-28. If you give the defensive line credit for stopping Oregon on 4th and goal from the one yard line in the first half, I even got the details right.

It’s not always going to work out this well. But combining numbers with watching games is powerful in making predictions.

To read the Oregon at Michigan State preview, click here.