I was watching the Arizona State and UCLA game last weekend when the Pac-12 standings popped onto the screen. It said that Utah had 1 conference win.

One conference win? The Utes have only beaten Stanford?

Despite their 4-7 record, Utah is a good team. In their non conference schedule, they beat BYU and Utah State, team ranked 22nd and 47th in The Power Rank. In conference, they have played almost all opponents tough, coming within a touchdown of beating UCLA despite throwing 6 interceptions. Overall, Utah ranks 27th in The Power Rank.

If a team with one conference win ranks 27th, how good is the Pac-12 overall? The visual shows the ranking of conferences by averaging over each team’s rating (The Power Rank’s estimate of that team’s expected margin of victory over an average FBS team). 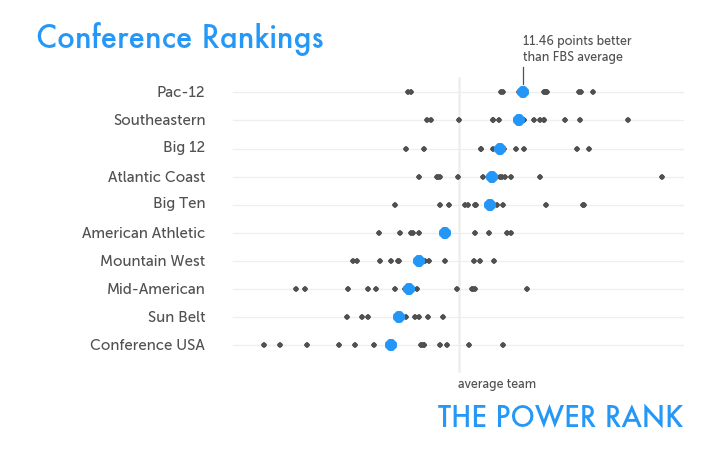 The Pac-12 slightly edges out the SEC as the top conference. While this does not conclusively show the Pac-12 is the better conference, it does suggest the two conferences are closer than anyone thinks.

A few other insights from the visual.

The Pac-12 has been remarkably tough this season. We’ll look at games with national title implications today, and none will involve a Pac-12 team.

Last season, Auburn did not win a single SEC game. This meltdown landed them 76th in The Power Rank by year’s end and got coach Gene Chizik fired, two years after winning a national title.

Former offensive coordinator Gus Malzahn took over as head coach and immediately elevated this team, as Auburn ranks 17th in The Power Rank. Some programs always have talent, which makes a quick turn around possible. As another example, Jim Mora has performed miracles at UCLA over the past two seasons.

Auburn has only one loss all season, and a win over Alabama gives the Tigers the SEC West title and a place in the conference championship game. Can Auburn win?

Auburn has an advantage because of their 11th ranked offense based on yards per play adjusted for strength of schedule. They run an up tempo spread attack that runs the ball on 69% of plays. However, they are also efficient through the air. QB Nick Marshall has led Auburn to the 14th best pass offense (yards per attempt adjusted for strength of schedule).

Check out this match up visual for Auburn’s offense against Alabama’s defense. Better defenses appear further to the right to facilitate comparisons. 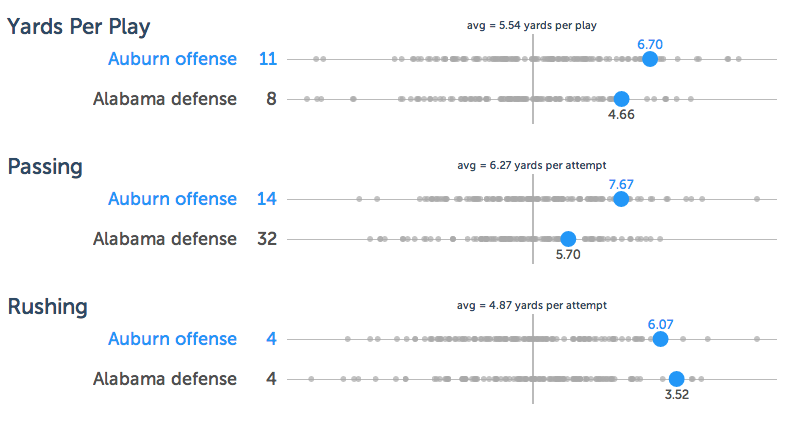 Auburn has an edge in the passing game.

Alabama is the favorite in this game, and this edge depends on their 15th ranked offense over Auburn’s 40th ranked defense. The Crimson Tide offense started slowly this season. Coach Nick Saban would get steamed each week at their poor execution. This poor play prompted me to predict that Alabama wouldn’t win another championship on Grantland.

But with each passing week, Alabama makes me look more stupid. They are clearly executing better and can throw downfield with QB AJ McCarron.

The line favors Alabama by 9.5, but my yards per play numbers predict a 3 point win. Either way, the margin is close enough that a few turnovers or big plays on special teams could flip the result in favor of Auburn.

What will be higher: the win probability for Michigan (25%) or the fraction of red in the Big House on Saturday?

Michigan has struggled this season, losing 3 of their last 4 games. Meanwhile, an undefeated Ohio State creeps further into the national title game conversation each week despite their weak schedule.

Ohio State has a prolific offense, ranked 5th by yards per play adjusted for strength of schedule. While their rushing attack behind Carlos Hyde gets most of the attention, they can also throw the ball well. QB Braxton Miller has completed 68% of his passes, leading the 29th best pass offense in the nation. They face a Michigan defense ranked 32nd.

Ohio State does not have such an elite unit on defense. Their 22nd ranked defense is good, but has allowed teams like Iowa, Wisconsin and Northwestern to stay in games. They face a Michigan offense that has caused their fans more indigestion than Uncle Tony’s nachos last Thanksgiving.

Florida State has jumped to elite this season. The Power Rank gives them a rating of 36 points, which implies they would beat the average FBS team by this margin. Over the last 30 years, this puts them behind only 1995 Nebraska (41 points) and just head of 2011 Alabama (35 points, beat LSU in title game).

Florida State might not maintain this level with at least 3 more games on their schedule. But the Seminoles look potent on both sides of the ball. The offense and defense rank 4th in the nation by yards per play adjusted for strength of schedule.

Florida could stay in this game. Just like Auburn and UCLA, the Gators always have talent, no matter how many wins they have this season. Despite a rash of injuries, their defense still ranks 10th in the nation, which could keep them in this game. However, they continue to struggle on offense, with the 95th ranked unit.

Both the team rankings and yards per play predict a 25 point win for Florida State.

Not many people are talking about Missouri in the national title picture. However, the one loss Tigers will win the SEC East if they beat Texas A&M. If Missouri then beats Alabama or Auburn in the SEC championship game, the BCS title game either includes Missouri (potentially over an unbeaten Ohio State team) or excludes the champion of the conference that has won the last 7 titles.

The offenses will dominate the game between Missouri and Texas A&M.

Missouri has senior QB James Franklin back from a separated shoulder. Their 10th ranked defense faces a Texas A&M defense that has struggled at 92nd in the nation.

Texas A&M’s offense has been just as potent this season as last when QB Johnny Manziel won the Heisman. Both units ranked 2nd in the nation in yards per play adjusted for schedule. Manziel will look for redemption after a terrible game against LSU last week.

The line started at Missouri by 3 but has since moved to 4. Both the team rankings (10) and yards per play (6) predict a bigger margin of victory for Missouri, suggesting some value in this game.

South Carolina could lose this non conference game and still make the SEC title game. They win the SEC East if Missouri loses to Texas A&M. Then there is the potential for a 3 loss team to win the SEC championship game.

This game should be close, as both the line and my team rankings predict only a 4 point win for South Carolina at home.