Before we delve into analyzing games, I have an apology.

Previously, I had reported that The Power Rank algorithm predicted 66.8% of winners in college football bowl games from 2005 through 2012. I made a mistake. For the last two seasons, I included the bowl games in the set of regular season games in which I calculated the rankings and predictions. Not fair.

I should have spotted the mistake earlier. I also calculated the prediction accuracy of the Colley Matrix, one of the computer polls in the BCS, with the same data sets. This method predicted 62.4% of game winners, a percentage that seemed high for a system that does not account for margin of victory.

The visual shows corrected results. The Power Rank predicts 63.4% of game winners, a rate competitive with the Vegas line but not quite as good. The Colley Matrix gets 55.1%, consistent with the results of The Prediction Tracker. 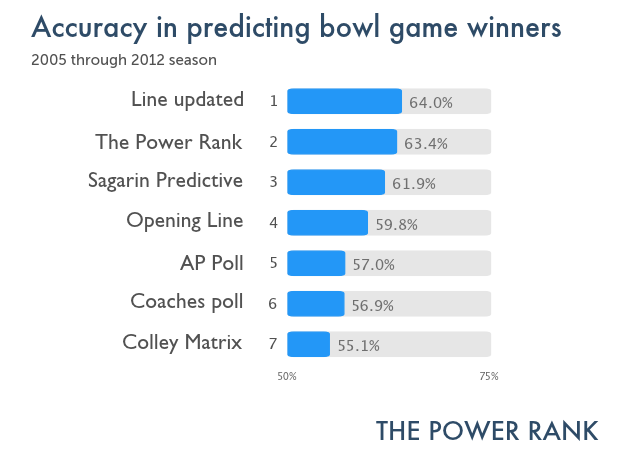 AP preview states that Oklahoma ranks first in the nation in pass defense. Man, Texas Tech should have a hell of time throwing the ball against the Sooner defense, especially when redshirt freshman QB Davis Webb will start his 3rd game.

However, tradition college football statistics are stupid in so many ways. First, pass defense statistics do not count sacks as pass plays. As if the offense were running the ball, these negative yards count against rushing statistics. If you include sacks as pass plays, Oklahoma drops to 2nd behind Florida State in pass yards per game.

However, the biggest problem with traditional college football statistics is using yards per game instead of yards per play, a better measure that adjusts for pace of the game. Oklahoma’s pass defense drops to 5th in the nation.

After adjusting for schedule, Oklahoma ranks 21st in pass defense, a solid but not elite unit. They face a Texas Tech passing attack that ranks 21st as well. QB Baker Mayfield should get credit for most of this efficiency, as the walk on freshman started until a knee injury against Kansas. However, redshirt freshman Davis Webb hasn’t missed a beat since taking over. In 2 starts, he has thrown for 6.9 yards per play against Iowa State (11th ranked pass defense) and 9.24 against West Virginia (49th).

Texas Tech also has a stout defense, ranked 19th in yards per play adjusted for schedule. This unit made vast improvements last season and continues to improve this season. They face an Oklahoma offense ranked 48th, a match up that favors Texas Tech.

Without any significant turnovers or special teams plays, my numbers see a close game that favors Texas Tech to win (yards per play says 5 points). Hence, the line that favors Oklahoma by 6 doesn’t make sense.

A few weeks ago, I estimated Missouri’s chances of winning the SEC East over at Grantland. With the injury to starting QB James Franklin, I assumed their offense would regress towards average.

Then redshirt freshman Maty Mauk threw for 8.2 yards per attempt (6.27 average) against Florida, one of the stingiest defenses in the nation. Missouri’s pass offense shot from 42nd to 18th in my rankings. Can Mauk continue this kind of efficiency?

South Carolina’s defense adds another wildcard factor. This unit ranks 21st in the nation (18th in pass defense), but I have yet to adjust for whether all world DE Jadaveon Clowney decides to play or put forth maximum effort.

On offense, South Carolina lost QB Connor Shaw to an injury last week. They lose some accuracy when back up Dylan Thompson (57% completion rate) takes over for Shaw (63%). South Carolina’s 13th ranked offense can still lean on RB Mike Davis, who has gained 6.7 yards per carry. They face the 17th ranked defense of Missouri.

Yards per play predicts a 6 point win for Missouri at home, while the line predicts a 3 point win. I’m waiting another game to see whether Missouri QB Mauk can keep this offense ticking at the same level.

Abilene Christian is a small school in Abilene, Texas, about a 3 hour drive west of Dallas. It is affiliated with the Churches of Christ and has just under five thousand students. Since you’ve probably never heard of Abilene Christian’s football team, why are they traveling to play New Mexico State this weekend?

It’s probably not for a payout. New Mexico State had no conference when the WAC disintegrated into thin air last season. They play as an FBS independent this season. Head coach DeWayne Walker found the job so stimulating that he left to coach the defensive backs with the Jacksonville Jaguars (no, the NFL has not yet kicked the Jags out of the league for sucking this season).

Abilene Christian is a Division II school in a transition year to the championship subdivision. I presume this allows the game with New Mexico State. Next season, they will play in the Southland Conference, which also adds New Orleans, Incarnate Word and Houston Baptist. Yes, those schools exist and have football teams. The latter two are 239th and 252nd out of 252 schools in my rankings.

Abilene Christian is much better, ranking 193rd, 17 spots ahead of New Mexico State. Both yards per play (13.8) and the team rankings (2.2) predict a victory for Abilene Christian. These calculations come from the 3 games they have played against FCS teams. Despite the small sample size, these games should reflect their best competition.

And, if you’re a really hard core college football fan, you can watch the game on WatchESPN tomorrow night at 8pm Eastern.