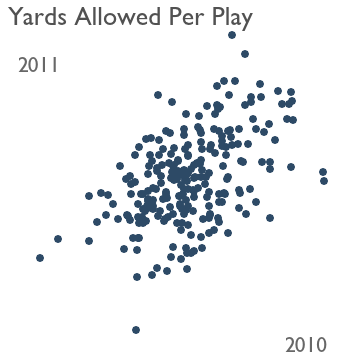 Numbers, especially those spit out of a computer, must pass the stupid test. If you think the results are stupid, then the numbers don’t pass the test.

After four weeks of college football, I was working on rankings that only included games from this year. Here at The Power Rank, we take football statistics like yards per play and adjust them for strength of schedule. But when I looked at the results for defense, Texas Tech had the top ranked defense.

Last year’s Texas Tech defense actually looked better by yards per play, ending the season ranked 75th in our defense rankings. (In the rest of this article, offense and defense rankings refer our calculations that adjust yards per play for strength of schedule.) But head coach Tommy Tuberville just brought in his 3rd defensive coordinator in 3 years. Even with a load of talent, a jump from 75th to 1st is almost impossible.

It doesn’t pass the stupid test.

How to Make The Rankings Better

But what’s going on behind these correlations?

During the season, yards per play is affected by injuries and the inherent randomness of football, such as that tipped pass that falls into a receiver’s hands for a long touchdown. Changing the yards gained on a play from 0 to 92 will have a dramatic effect on the game average. These factors make the early to late season correlation coefficient much less than 1.

From season to season, teams can have large turnover in players and coaches. I thought this would lead to a much smaller correlation coefficient. It doesn’t. One reason is the identity of the program. Texas has a huge fan base, lots of money, and a long tradition of recruiting stellar athletes from the Lone Star state. Rice has none of those things.

No perfect rankings early in the season

The strong season to season correlations suggests using last year’s results in this year’s rankings. In fact, we have been doing that so far, using all games last year and counting this year’s games twice. We will continue to do this.

But there are still problems.

For example, Baylor is still the top ranked offense. Given that the Bears lost quarterback Robert Griffin III to the NFL draft, this ranking is most likely too high. However, head coach Art Briles has led successful offenses at both Houston and Baylor. Moreover, senior quarterback Nick Florence has already led the Bears to 7.26 yards per play this year, much higher than the 5.45 average over all FBS and FCS games last season. With only this year’s games, Baylor is the 34th ranked offense due to weak competition. They will probably end the season somewhere in between 1st and 34th.

Surprisingly, key football statistics like yards per play correlates from year to year almost as strongly as it does from early to late season. While that certainly affects what games we use in our rankings, it also matters to fans. Reputation, tradition and money matter in college football. These factors don’t change overnight. Consider these 3 programs.

Programs don’t change overnight. Keep that in mind as the season progresses.