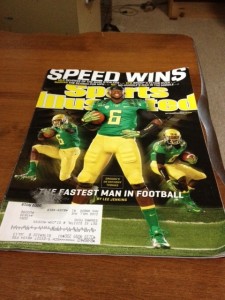 Last week, my first article appeared in Sports Illustrated. On page 32 of the September 24th, 2012 issue, I used yards per play as a metric to determine which college football teams might soon fall in the rankings. Of the 4 teams, Texas didn’t play this weekend. How did the other 3 teams do?

Against one of the worst teams in college football, the Buckeyes had a 21-15 lead late in the 4th quarter. Ohio State gave up 5.03 yards per play to a UAB team that only gained 3.38 the previous weekend at South Carolina. The Buckeye defense has fallen from 22nd at the end of last season to 44th now in our defense rankings. These rankings are based on yards allowed per play adjusted for schedule strength. With this kind of play, they won’t be 14th in the AP Poll for long.

Kansas State knew they could run the ball against Oklahoma. Coach Bill Snyder’s team ran the ball on 68% of their plays (44 of 65), higher than their 63% from last year that was 12th most in the nation. They gained 4.84 yards per rush and went home with a 24-19 win. The Sooners, who have not overcome their injuries on the defensive line, dropped to 16th in the AP Poll.

The Gamecocks beat a good Missouri team 31-10. While quarterback Connor Shaw won’t go 20 for 21 for 249 yards every game, their mediocre performance against Vanderbilt might be an outlier. South Carolina has jumped to 35th in our pass offense rankings after ending last season at 60th.

So after only one week, 2 of the 3 teams identified as “primed to plummet” struggled. Not a bad start.

Check out all our college football rankings on our premium page, still free at this point in the season.