When Auburn hired Gene Chizik as head coach in 2009, it set off a firestorm of controversy. In the previous two years at Iowa State, Chizik had a 5-19 record as head coach. This angry fan was happy to point this out to Auburn athletic director Jay Jacobs. The fan didn’t even get the memo that one win came against FBS opponent South Dakota State. Moreover, Iowa State lost to lower subdivision opponent Northern Iowa. However, Chizik quickly turned Auburn around. In 2010, the Tigers completed a 14-0 season with a National Championship game win over Oregon. With such contrasting tenures as a head coach, how can we know if Chizik is a good coach?

To answer this question, we’ll use the year end rating given by our algorithm for ranking teams. While we usually use the difference in ratings to give a projected point spread, here we use the absolute value of the rating. This value gives how many points better a team is than the average FBS team. However, we can’t just look at the difference between Iowa State in 2008 (-10.0) and Auburn in 2010 (24.9) and conclude that Chizik improved as a coach. Auburn has vastly more resources for football than Iowa State.

Instead, we look at a coach’s tenure compared with the school’s performance before and after this period. A school’s reputation and monetary resources for football are roughly constant over time. Iowa State will not suddenly turn into the money making machine that is Texas football. Some schools such as Oregon and Oklahoma State have received hundreds of million dollars in donations, but even this infusion of money doesn’t change the football team overnight. Here, we show The Power Rank’s rating for Iowa State and Auburn from 2004 through 2011. 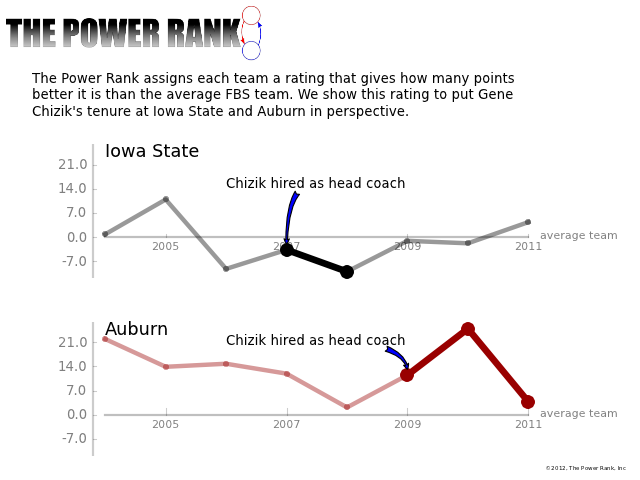 Iowa State had some decent teams under Chizik’s predecessor, Dan McCarney. The Cyclones came within a missed field goal of winning the Big 12 North title in 2005. However, Iowa State dropped off significantly in 2006, paving the way for Chizik’s two rough years in Ames. In defense of Chizik, McCarney didn’t leave the cupboard full of talent. After recruiting top 50 classes from 2002 through 2004, McCarney wasn’t able to replicate this feat afterwards. In fact, Iowa State hasn’t had a top 50 class since 2004, suggesting that Chizik didn’t do much to increase the talent level at Iowa State. Paul Rhodes took over in 2009 and has overseen steady progress in the program over the last 3 years. In 2011, Iowa State upset Oklahoma State, costing the Cowboys a shot at the National Championship game.

At Auburn, Tommy Tuberville led the Tigers to an undefeated season in 2004, a year in which they got snubbed from the National Championship game. This Auburn team ended the year with a 21.9 rating, 3 touchdowns better than the average FBS team. However, the program declined over the next 4 years, leading to Tuberville’s stepping down and Chizik’s hiring. In 2010, Chizik landed the 4th best recruiting class, highlighted by quarterback Cam Newton and defensive tackle Nick Fairley. These two junior college transfers led Auburn to the national title. The TIgers ended that year with 24.9 rating. In 2011, Auburn posted 8-5 record with a bowl win over Virginia. However, The Power Rank assigned them a 3.7 rating, not far above the 2.1 they had in 2008, Tuberville’s last season.

It’s unfair to judge a coach until he’s had 4 years at a school and the opportunity to recruit his own players and install his own system. However, Chizik faces an uphill climb, as 43% of his 2009 and 2010 recruiting signees are no longer with the program. Moreover, both of his coordinators are new this upcoming season.

However, we make visuals so you can draw your own conclusions about Gene Chizik’s coaching abilities. Did a cyclone hit Ames in 2007 that made coaching at Iowa State horrifically difficult? Were there mitigating circumstances that let Utah State almost beat Auburn to open the 2010 season? Please leave us a comment.