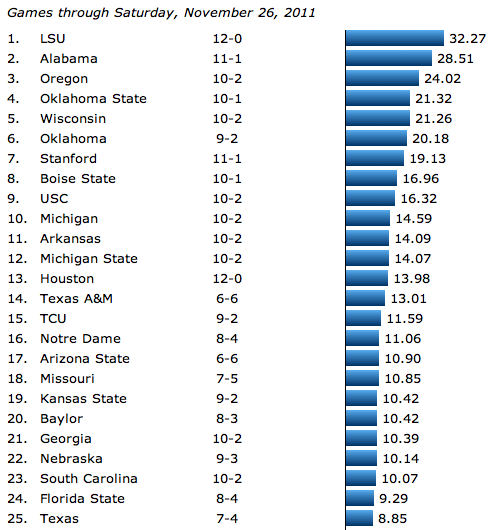 It looked like a weekend that could really cause BCS chaos. Top ranked LSU faced Arkansas, the 3rd ranked team in the BCS that had just beaten Mississippi State 44-17. The betting public had pushed an initial line favoring LSU by 14 down to 12. Second ranked Alabama traveled to Auburn in the Iron Bowl. Coming off a national championship last year, Auburn came into the game ranked 24th in the BCS and had home crowd support in this rivalry game. But the games turned into glorified scrimmages. After getting down 14-0, LSU steam rolled Arkansas 41-17. The 24 point margin of victory was quite close to the 20.1 point spread predicted by The Power Rank. By a 42-14 score, Alabama easily handled Auburn, a team The Power Rank puts lower than Northwestern this week. The 28 point margin of victory closely mirrored the 23.6 point spread predicted for the road team Alabama.

After 14 weeks of football, the BCS confirms what SEC fans have known for months: LSU and Alabama are the two best teams in the country. While LSU pulled off a 9-6 win in overtime against Alabama three weeks ago, the two teams are on a crash course to play again in the national championship game. And as unpalatable as a rematch might seem, our rankings have these two teams on top, rating second ranked Alabama more than 4 points better than 3rd ranked Oregon. This dominance becomes more apparent when we view our offense and defense rankings. 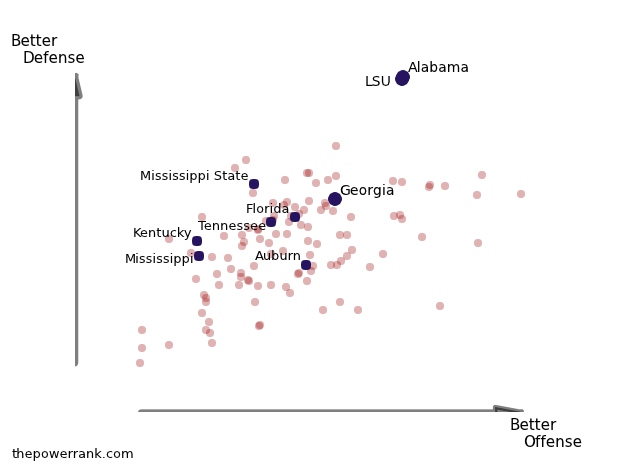 LSU and Alabama almost lie on top of each other and separate themselves defensively from every other team in the country. This dominance was on display this past weekend, as LSU held Arkansas to 1.7 yards per carry (47 total) while Alabama stymied Auburn’s passing attack to the tune of 3.1 yards per attempt (62 total).

While the BCS might achieve its mission of identifying the top two teams in the land, it has executed this mission in the most bizarre of ways. Only one SEC west team can play in the conference championship game, so Alabama, by virtue of its loss to LSU, will sit at home this weekend with their place in the national championship game assured. For all their trouble in winning that brutal defensive battle in Tuscaloosa, LSU will play the SEC championship game as the effective road team, since Georgia will drive 1.5 hours from Athens to Atlanta for the game. In this current situation, the only hope for BCS chaos is a Georgia win. A LSU loss might knock the Tigers out of the national championship game, keeping the most dominant team all year from playing for the title. However, most pundits believe a LSU loss will NOT knock them out of the game, making the national title game feature two teams that didn’t win their conference. Awkward. With a 16 team playoff, at least one conference champion gets to play for the national title.

Can Georgia beat LSU? It certainly didn’t seem like it in September when the Bulldogs lost to South Carolina, a loss that dropped their record to 0-2. All the late summer heat in the south got channeled to the seat under coach Mark Richt, a man who has only won 106 games in 11 years as an SEC coach. However, the South Carolina game was a fluke, as Georgia lost by 3 despite giving up 3 touchdowns on defense and special teams. Since this game, the Bulldogs have won 10 straight games to win the SEC East. However, their schedule certainly aided this winning streak, as Georgia didn’t face LSU, Alabama or Arkansas. Moreover, their only definitive conference win was against Auburn. The Power Rank puts Georgia at 21st and predicts a 22 point LSU win, giving Georgia an 11% chance of an upset.

However, our analytics are no longer restricted to evaluating the entire team, as the algorithm has been applied to offense and defense separately. The ratings should be interpreted as how many points an offense/defense would score/allow against an average opposing unit. Georgia’s offense and defense have a 30.0 (30) and 22.4 (22) rating respectively. The defensive rating is quite a bit larger the 17.8 points per game the Bulldogs allow due to the poor offenses they have played. The visual above highlights the teams that have played both Georgia and LSU and shows the weakness of their offenses. Auburn and the $1.3 million they pay coordinator Gus Malzahn top this list of SEC opponents with the 49th ranked offense.

While the team rankings predict a point spread, comparing a team’s offensive rating against their opponent’s defensive rating gives a score prediction. While we won’t get into the details of this prediction here, the unit rankings predict a 31-13 LSU win over Georgia. This 18 point margin of victory is significantly smaller than the 22 points given by the team rankings and bumps Georgia’s chance of winning from 11% to 16%.

On the field, LSU has only one weakness: the quarterback position. Coach Les Miles has turned the reigns back to Jordan Jefferson, a better athlete but poorer passer than Jarrett Lee. For Georgia to pull off the upset, they need to score early and force Jefferson to mount a comeback. If LSU can get an early lead, they can run the ball behind a physical offensive line and only call the safest of pass plays. Game over.