Strength of schedule
Margin of your victories
Crucial in forecast

As Texas fans traveled to Missouri this Saturday to face the Tigers, they probably felt pretty good. The Longhorns had won all their games except against Oklahoma and Oklahoma State, two of the best teams in the country, and were ranked 16th in the BCS. In addition, they had won 6 straight against Missouri, and the Tigers had a losing record at 4-5. However, Vegas only had Texas a 1.5 point favorite in the game. Hmm…

On closer inspection of Missouri’s results, they have lost to Oklahoma State (4), Oklahoma (5), Arizona State (11), Kansas State (16) and Baylor (34), all highly regarded teams by The Power Rank. Only the home contest against Oklahoma State got out of hand (a 21 point loss). Our algorithm accounts for margin of victory and strength of schedule in ranking Missouri 15th before the weekend. On the other hand, Texas let the game against Oklahoma get away, losing by 38, and faced a meager out of conference schedule in Rice, BYU and UCLA. They were ranked at 21st, 6 places and 1.6 points worse than Missouri, before this weekend. 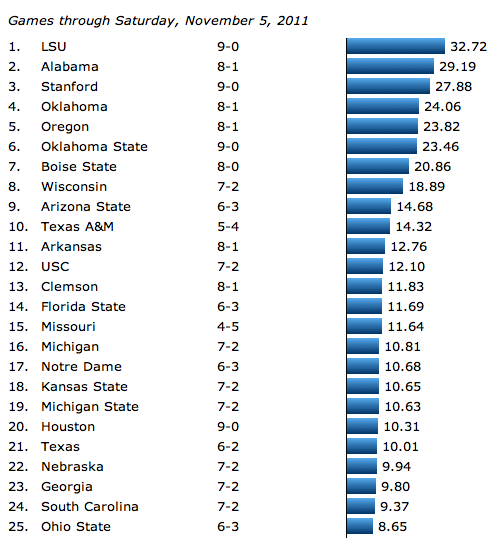 With home field advantage, we predicted a 4.6 point victory for Missouri, which corresponds to a 61% chance of winning the game against Texas. Missouri won 17-5, as the Texas offense managed a field goal in the first quarter. Overall, the algorithm has predicted the winner in 73.6% of all games involving 2 Division I teams (871-312). Strength of schedule and margin of victory matter in developing predictive rankings.