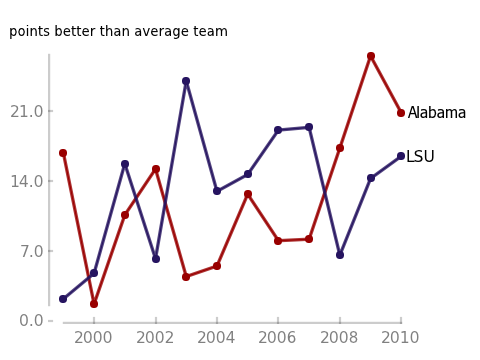 “What a lovely home. I just love those window treatments.” Nick Saban, dressed in an Armani suit and Gucci dress shoes, walked into the Tuohy home to recruit Michael Oher and charmed the skirt off of his mother Leigh Anne. As told in The Blind Side by Michael Lewis, Saban, then the LSU head coach, went to recruit offensive tackle phenom adopted out of poverty by the Tuohy family. Michael only said one thing during the visit: “You staying?” Maybe the young man knew Saban would leave LSU in 2004 to become the head coach of the Miami Dolphins. Oher didn’t commit to LSU, but Saban’s charm with players and their families has steered the fate of LSU and Alabama, his current program, over the last decade. The visual above shows team strength, or how many points better than the average team as determined by our rankings, for LSU and Alabama over the last decade. LSU was consistently better than Alabama until 2008, the second year after Saban took over as head coach. The two best teams in this visual, LSU in 2003 and Alabama in 2009, both won the national championship under Saban. This Saturday, Alabama meets LSU and coach Les Miles, who has a different recruiting style, in a huge game with national championship implications.

At The Power Rank, we use algorithms based on statistical physics to rank teams. Each team also has a rating, and the difference in rating between two teams gives a predicted point spread for a future game. Our analytics predict that Alabama will win by 3.8, very close to the current line of 4.5. However, we have recently applied our methods to rank offense and defense, not just the entire team. With these new rankings, we subtract the defensive rating from the offensive rating to get a prediction for how many points a team will score against an opponent. Now we can predict a final score instead of just a point spread. To think about the offensive rankings differently, we shift the ratings so that it gives the expected number of points scored against an average defense. Then these ratings are analogous to the standard scoring offense (points scored per game) except they account for strength of schedule. We perform a similar shift in the defensive rankings and show the results for all 120 bowl subdivision teams in this image. 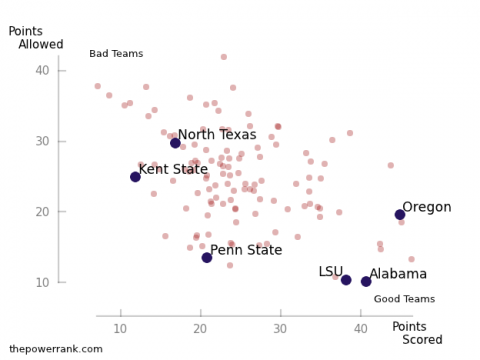 Alabama leads the nation in defense with a 10.1 rating. However, this number is quite a bit higher than 6.9 points they allow per game. This reflects a schedule that includes Kent State, North Texas and Penn State, offenses ranked 116th, 103rd and 82nd respectively. LSU’s defense is second behind Alabama with a 10.4 rating. This predicted average number of points given up is lower than the 11.5 raw scoring defense because of their season opening performance against Oregon. The Ducks have the 3rd best offense at 44.9 but LSU held them to 27 points.

On offense, Alabama is ranked 7th with a 40.7 rating, slightly higher than the 39.4 points they score per game. The Tide traveled to Happy Valley to score 27 points against the 6th ranked Penn State defense while also performing well against Florida (22) and Tennessee (24). LSU’s offense comes in 9th, and their 38.1 rating is more than two points lower than Alabama’s offense. Moreover, these scoring offense numbers, both the raw average and our adjusted ratings, include scores from special teams and defense. Alabama has 3 such touchdowns (1 punt return and 2 interceptions) while LSU has 4 (1 kick off return, 1 interception, 2 fumble returns), which doesn’t include the interception that defensive wrecking machine Tyrann Mathieu took down to West Virginia’s two yard line. So Alabama’s offense is probably more than 2 points better than LSU’s offense. These new rankings predict a Alabama 27.8-22.0 win, a score which includes 1.5 points added to Alabama and 1.5 subtracted from LSU for home field advantage. So while the defenses get all the attention this week, running back Trent Richardson, quarterback AJ McCarron and the Alabama offense will make the difference in the Tuscaloosa Tussle, giving a higher final score than most people expect.

How will it turn out? LSU has thrown 1 interception in 176 pass attempts this year, an absurdly low rate for a Hall of Fame quarterback much less one, LSU’s Jarrett Lee, who had 7 interceptions returned for touchdowns in 2008. After a Lee pick late in the game, Trent Richardson punchs in a game winning score for a 28-22 Alabama win.