And then there were six
Who will play in the big game?
Behold their chances 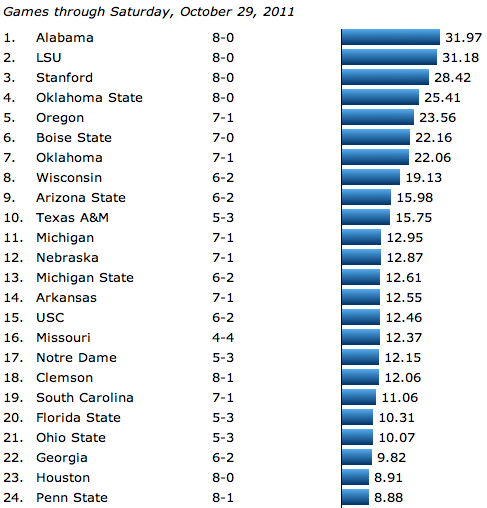 On the last Saturday in October, college football offered some huge conference match ups. In the Big Ten, Wisconsin traveled to Ohio State to face the Buckeyes at The Horseshoe. Down south, the SEC pitted Georgia against Florida amidst The World’s Largest Outdoor Cocktail Party. But the most important game on Saturday, as validated by the presence of ESPN’s College Gameday, was Stanford at USC. It wouldn’t be surprising if USC were attracting all the media attention given their success this decade. But times have changed. Gameday showed up in Los Angeles because of an undefeated Stanford team. The Cardinal are one of a few teams in contention to play the SEC champion in the national championship game.

Before the game, USC coach Lane Kiffin won the media BS award of the week by calling Stanford quarterback Andrew Luck perfect and asking his interviewer for any ideas about how to stop Stanford’s offense. Kiffin didn’t need to consult his dad, USC’s defensive coordinator, to know that slowing down Stanford’s running game and getting pressure on Luck would mitigate Stanford’s offense. Or maybe he did. Either way, USC held Stanford to 3.9 yards per carry (186 total), much lower than their 5.6 yard average for the season. USC also sacked Luck twice. While this sack total might not sound impressive, Stanford’s offensive line, which features 2 potential first round picks, has allowed only 2 sacks all season. Despite this defensive performance, Stanford escaped with a 56-48 win when Ben Gardner’s right arm swatted the ball away from USC’s Curtis McNeal to end the third overtime.

Stanford remains undefeated with the win, but Kansas State and Clemson dropped out of the national championship picture with losses to Oklahoma and Georgia Tech respectively. With only 6 undefeated teams remaining, The Power Rank can update the projections that each of these teams remain undefeated. However, this week, we make the transition to rankings that only use games from this year. Up to this point, the rankings included all games in a one year window, with this year’s games counted twice. This drastically overrated teams like Auburn, who had a huge 56-17 win over South Carolina (19) and a 3 point win over Oregon (5) at the end of last year. With the loss of key players, coach Gene Chizik has found this season much more difficult. This change drops Auburn’s rating by 8 points, moving them from 12th to 38th. Perhaps this lower ranking isn’t a surprise given Chizik’s 5-19 record at Iowa State before becoming Auburn’s coach. Moreover, this change also improves Oregon’s rating by 2 points. These changes affect our forecast since Alabama plays Auburn while Oregon travels to Stanford. Here are the chances that each of 6 teams remains undefeated.

With these changes, Alabama’s likelihood of going undefeated gets closer to Stanford’s than in our previous analysis. Alabama has the toughest remaining game, a 58.7% chance of beating LSU, but Stanford still faces Oregon with a 67.6% chance of winning. The changes in the rankings also recognize Houston as a completely different team with the return of quarterback Case Keenum this year. The Cougars move from 45th to 23rd and have a 32.2% chance to remain undefeated, much higher than the 8.7% we predicted earlier. This analysis includes a Conference USA championship game against Southern Miss.

The Power Rank can also estimate the likelihood that LSU and Alabama have a rematch in the national championship game. For this to happen, the remaining 4 unbeaten teams must each lose at least one gamen and the winner of the Tuscaloosa Tussle must go undefeated while the loser ends the season with only that one loss. The new rankings give this a 15.3% chance, quite a bit higher than the 4.9% chance we forecasted last week. Of course, these conditions do not ensure a rematch, since Oklahoma reenters the picture if they beat Oklahoma State and finish the season with one loss.

A more interesting scenario arises if we tweak the last situation so that Boise State goes undefeated. The winner of Alabama LSU and Boise State would be the only unbeaten teams, while the loser of the Tuscaloosa Tussle finishes the season with one loss. This is my personal favorite scenario since the SEC would secede from college football if an undefeated Boise State made the national championship game over a one loss Alabama or LSU team. The Power Rank gives this a 10.1% likelihood, about a one in ten chance for chaos.

Our analysis also produces some surprising numbers. As dominant as Alabama and LSU have been all season, there is a 30.4% chance that they both lose at least one game. While this number might seem absurdly high, consider that one of these two teams will lose on Saturday when they play each other. So 30.4% is the probability that the winner loses one of three remaining regular season games or the SEC championship game. The Power Rank suggests taking up a friend who will pay 10 to 1 if LSU and Alabama will both lose at least one game. Of course, no undefeated SEC teams greatly helps Boise State make the national championship game. The chance that Boise State remains the only undefeated team at the end of the regular season is 5.5%. They might make the championship game in other scenarios, but the system won’t lock them out as the only undefeated team.

Have a scenario of which you’d like to have the probability? Leave us a comment, please. Thanks for reading.