No. Andrew Luck will not save Indianapolis. That’s KC Joyner’s answer in ESPN The Magazine. Their analytics issue just showed up in my mailbox, and it’s remarkable that only one fifth of one article is devoted to football. One measly subsection out of 11 articles. At least Andrew Luck’s name appears on the cover. The Colts will most likely take the Stanford quarterback with the first pick in April’s NFL draft. However, this draft pick won’t save the franchise, argues Joyner, The Football Scientist. But does his reasoning make him seem more like Albert Einstein or Joe Morgan? Let’s take a look.

Yards per pass attempt. Joyner first looks at Luck’s passing numbers in the first half versus the second half of the season. This split makes sense since Stanford faced Duke and UCLA early but Oregon and USC late in the season. Against early season defenses that allowed 7.9 yards per pass attempt, Luck threw for 9.6 yards per attempt. The late season brought defenses that gave up 6.7 yards per attempt, a statistic we noted in our preview of the Stanford Oregon game. Luck threw for 8.0 yards per attempt against these defenses. Joyner cites this decrease as exhibit A against Luck.

But yards per pass attempt should go down against better competition. To put this in perspective, Luck threw for 1.7 and 1.3 more yards per attempt than the early and late season defense allowed, respectively. Luck exceeded expectation throughout the season. Moreover, if we take these excess yards as a percentage of the yards the defense allowed, Luck was 21.5% better in the early season compared with 19.4% later.

Bad decision rate. The article gets more interesting later, as Joyner introduces bad decision rate. This is the fraction of pass attempts that led to turnovers or near turnovers, such as a dropped interception. The job at ESPN must come with minions to watch games and track stats like this. Luck’s bad decision rate started at 0.6% early in the season only to balloon to 4.9% later against better competition.

Watching those late season games confirms Luck’s increase in bad decisions, or at least his increase in bad throws. Against USC, Oregon and Notre Dame, Luck had an interception in each game that he threw directly into the hands of a defender. The pick against USC came late in the 4th quarter and nearly cost Stanford the game. Against Oregon, I would go as far as to say Luck seemed tentative against the pass rush from the Ducks. But not all 7 of those late season interceptions were Luck’s fault. Against Oregon, Luck threw a perfect pass into the hands of Ty Montgomery, only to watch the freshman fumble the pass straight into a defender’s hands for a pick. It’s a play that makes evaluating quarterbacks very difficult.

Luck, Manning and Griffin. It’s really nice of ESPN to tell us about all these advanced analytics. But these numbers do little to compare Luck with Peyton Manning since ESPN didn’t calculate a bad decision rate for Manning’s senior year at Tennessee in 1997. Let’s look at two key statistics, completion percentage and yards per pass attempt, for Luck and Manning from their last year in college. And just for fun, let’s throw in Baylor quarterback and Heisman Trophy winner Robert Griffin III, another entrant in this year’s NFL draft. 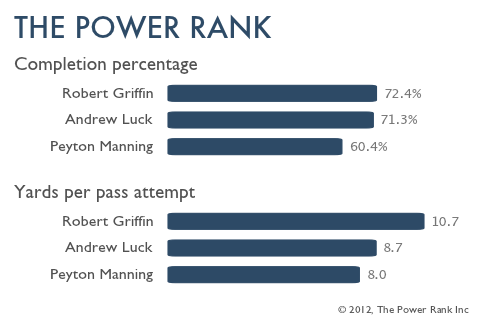 The most shocking aspect of this visual is Manning’s low completion percentage, 60.4%. Some schools of thought on drafting quarterbacks require a 60% completion percentage for success in the NFL. For example, San Diego Charger burnout Ryan Leaf completed 55% of his passes his last year at Washington State. Manning clears this 60% threshold, but not by much. Perhaps the SEC conference fielded particularly strong defenses in 1997. Or perhaps the Pac-12 and Big 12 had weak pass defenses this past year, leading to the gaudy numbers of Luck and Griffin. How would they have done in the SEC against Alabama and LSU?

From an analytics perspective, these numbers don’t account for strength of schedule, an omission that hinders all analysis of college football. Here at The Power Rank, we account for this strength of schedule in ranking teams. However, we have yet to adopt our algorithm to players. It gives us something to contemplate this off season.

What do you see in these numbers? Please leave us a comment.

—About The Power Rank.
—Is Gene Chizik a good coach?
—College football rankings.
—Can a defense force turnovers?