Last year in Eugene, Stanford ran out to a 21-3 lead in the first quarter against Oregon and held a 31-24 lead at halftime. However, things went south in the second half as Stanford quarterback Andrew Luck threw two picks and the Cardinal didn’t score at all. Oregon’s LaMichael James capped a 52-31 win with a 76 yard touchdown run. The game in early October turned out to be a national semifinal game, as Oregon lost to Auburn in the national championship game while Stanford won the rest of their games, including a blowout win over Virginia Tech in the Orange Bowl.

When Oregon travels to Palo Alto on Saturday to play Stanford, the game has similar national semifinal implications. Stanford is undefeated at 9-0 while Oregon’s only loss came against LSU, the undisputed best team in the land. At The Power Rank, we can now go beyond just telling you our team rankings predict a 7.1 point win for Stanford. We now rank scoring offense and defense separately, which adjust raw points per game to account for strength of schedule. Moreover, we can now predict a final score instead of a point spread. 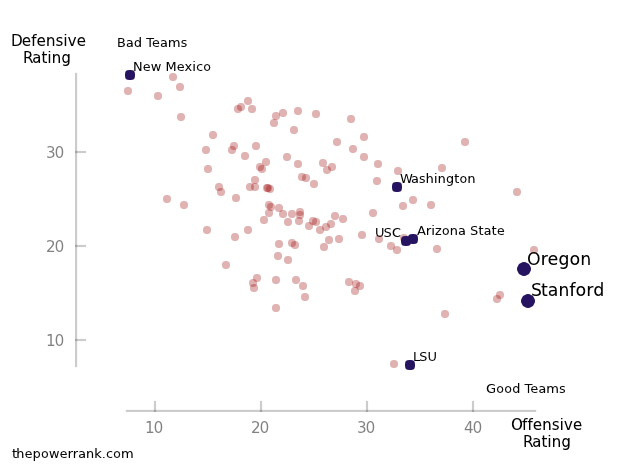 While everyone recognizes the strength of Stanford’s and Oregon’s offense, The Power Rank unit rankings show that the defenses are underrated. While Stanford has given up 16.5 points per game, their defensive rating predicts they would give up 14.2 points against an average offense. This is because Stanford has faced USC (15) and Washington (20), two of the top 20 offenses. Oregon has given up 20.8 points per game but have a defensive rating of 17.5 for 19th. The Ducks held the elite offenses from Arizona State (12) and Washington (20) below their season average in points.

The most interesting matchup is Stanford’s offense against Oregon’s defense. Despite all the Heisman attention Andrew Luck has received, Stanford is a run first team. They play smash mouth football behind two potential first round picks, tackle Jonathan Martin and guard David DeCastro, on the offensive line. However, right tackle Cameron Fleming is hurt and may not play, so watch how Tyler Mabry holds up on the right side. When Stanford does throw the ball, they will face an Oregon defense that gives up only 5.9 yards per pass attempt, 9th best in the country. While we normally don’t put too much weight in numbers that aren’t adjusted for strength of schedule, this matchup may play an important role in the game. While the injury to tight end Jack Erst will slow down Stanford, the suspension of Oregon cornerback Cliff Harris for driving violations can’t help the Ducks. The Power Rank unit rankings predict Stanford will score 39.6 points against Oregon, which includes 1.5 point bonus, or half the home field advantage.

When Oregon has the ball, they feature the speed of running backs LaMichael James, Kenyon Barner and De’Anthony Thomas. For Stanford’s defense to give up anywhere near the 3.0 yards per carry they’ve allowed this year, they must play disciplined and not allow these players to get outside to make big plays. Safety Delano Howell will most likely return from a hand injury, which will help the Cardinal make those tackles in space. The Power Rank unit rankings predict Oregon will score 32.9 points, which includes a 1.5 point reduction for playing on the road.

Two years ago, Andrew Luck threw a late pick against Cal that cost Stanford a 34-28 loss at home. He rebounded last year to throw for 11.8 yards per attempt (235 total) in a 48-14 rout of Cal. Most memorably, he ripped off a 58 yard run in which he knocked over a Cal defender. After his second half performance in Eugene last year, expect Luck to bounce back and lead a late game drive for a 40-33 win.

Disclaimer: the author did his Ph.D. at Stanford and turned this research into these rankings. So while this is far from an unbiased preview, the numbers are completely unbiased.