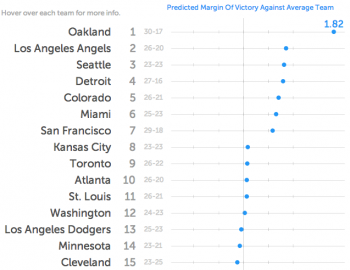 There was only one equation in the entire movie, and they had to get it wrong. Shortly after Billy Beane hires Peter Brand to work for the A’s, Brand stands in front of a white board and explains how a formula gives the number of wins a team needs to make the playoffs. The formula, the Pythagorean theorem of baseball, doesn’t say anything about the playoffs. It actually relates run production and prevention to winning percentage. If a team scores RS runs and allows RA runs, then its winning percentage can be estimated by taking the square of RS and dividing by the sum of the square of RS and the square of RA. The formula gets its name from its resemblance to the Pythagorean theorem for the length of the sides of a right triangle. For example, if a team both scores and gives up 748 runs in a season, the Pythagorean theorem says this team should win half its games, an intuitively pleasing result. Applying the theorem to this year’s San Francisco Giants, their 570 runs scored and 578 runs allowed gives a below .500 record. However, the Giants won .531 of their games, which suggests they got lucky in winning close games. The Power Rank puts San Francisco in the bottom half of teams at 19th, a better estimate of this team’s strength than their winning percentage. Similar formulas play an important role in our ranking system.

A little detail shouldn’t scar an otherwise fantastic movie though. Jonah Hill, who played Brand, nailed the quiet introspectiveness of guy who spent more time in front of a computer than partying in college. The only way to describe Phillip Seymour Hoffman’s portrayal of manager Art Howe is dopey. This demeanor was perfect in showing old school baseball’s resistance to new ideas. Howe left the data driven culture of the A’s to take the Mets managerial position in 2003, only to win .410 and .438 of their games the next two years. Brad Pitt fit the role of the athletic and emotional Billy Beane perfectly, although he could have thrown more chairs. A great touch was playing the sound track from sports talk radio, particularly when one commentator gave the calm of Art Howe credit for the 20 game winning streak.

But Hollywood always stretches the truth. Billy Beane didn’t discover the baseball analytics of Bill James after the 2002 season. The organization had employed these principles over a number of years. Also, Billy’s preaching of patience at the plate during the season didn’t cause the A’s to win 20 games in a row. But Hollywood did capture the most compelling and true story. As a baseball player, Billy Beane was an incredible athlete who had those cherished five tools that scouts drool over. But he couldn’t hit a baseball. When he moved into management, his failure as a player made him think in new ways to build a baseball team. The A’s took analytic methods in the public domain for years and built a team that averaged 93.8 wins over 8 years on a slim budget. The true genius of Billy Beane was his willingness to accept new ideas.