Les Miles, charming
Could use a good quarterback
A few words swing game

Darron Thomas was going to LSU. He was a quarterback, not the athlete that most people see in a tall, black teenager playing football, and he was going to play football at the school of his mother’s wishes. To seal the deal, the quarterback and his high school coach Bob Jones went to Baton Rouge for a visit in November, 2007. Jones mentioned to LSU coach Les Miles not to call Darron an athlete, some simple advice to a college head coach whose success depends on charming teenagers into playing for him. Of course, one of the first things Miles says to the recruit is “Darron, you’re a great athlete. You can do a lot of different things.” Thomas changed his mind and want to Oregon.

This story, as told by Austin Murphy in Sports Illustrated last fall, will almost certainly impact the game between Oregon and LSU this weekend. Let’s look at how The Power Rank compares these two teams over the last 6 years. Using the scores of all games played in Division I each year, the algorithm assigns each team a rating that estimates its strength compared to the average bowl subdivision team. LSU’s rating of 15.6 last year means they would have an average margin of victory of 15.6 against an average team. 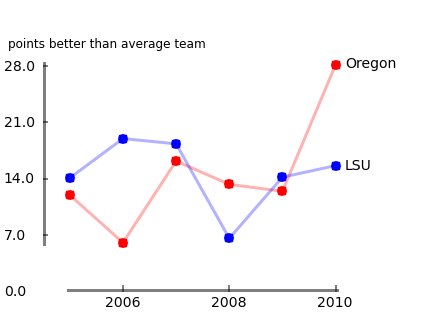 Les Miles has fielded a consistently strong team at LSU, with 2008 as their only down year. The 2007 Tigers, who won the National Championship despite two losses, wasn’t even the best team over this period. Despite the strength of LSU over the last two years, one can always wonder how much better they might have been with a competent quarterback. Even if starting quarterback Jordan Jefferson hadn’t been suspended for Saturday’s game for allegedly kicking someone in a bar fight, let’s not forget how he struggled last year. When Darron Thomas took over the starting quarterback job last year, Oregon became a much better team. Of course, Thomas doesn’t get all the credit, as the offense clearly made huge strides in coach Chip Kelly’s second year. But the athletic quarterback did throw for 363 yards in last year’s National Championship game loss to Auburn. He would have been a huge upgrade for LSU.