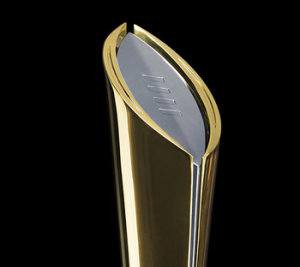 It’s championship week in college football, and the selection committee announces the four teams for the first college football playoff on Sunday. Will we see any upsets this weekend that alter the playoff landscape?

The numbers suggest we won’t see an upset with the top 3 teams (Alabama, Oregon and TCU). TCU doesn’t play in a championship game and hosts one of the weakest teams in their conference (Iowa State). Their 92% probability to make the playoff is higher than the chance for Alabama and Oregon.

However, we might see upsets for the next three teams: Florida State, Ohio State and Baylor. My calculations give a 81% chance that at least one of these teams loses this weekend.

These predictions come from an ensemble calculation that aggregates many different predictors. The predictions based on team rankings are only one factor in the ensemble.

The offense and defense rankings mentioned below are based on yards per play adjusted for strength of schedule. All predictions and rankings are available to members.

Oregon over Arizona by 14.7

I understand Arizona has won the last two games against Oregon. And it’s easy to just look at head to head games and think Arizona should win again.

However, you shouldn’t emphasize head to head too much. There is variance in sports. Teams don’t always play at the same level every game. A better team can lose to a worse team. Sports would be much less fun if this didn’t happen.

The past will not matter once these two teams kick off the Pac-12 championship game. Expect Oregon to win.

Alabama over Missouri by 14.1

Missouri has the 5th ranked defense, and their offense moves higher each week in my rankings (currently 59th). However, they will struggle against the best team in the nation.

These numbers do not capture motivation. I think TCU has motivation to win big to ensure that committee keeps them in the top 4.

Florida State over Georgia Tech by 7.5

Expect a lot of points in this game, as Florida State and Georgia Tech have the 34th and 73rd ranked defense by yards per play adjusted for strength of schedule.

Wisconsin over Ohio State by 4.0

This prediction has been adjusted by 4 points for the injury to Ohio State QB JT Barrett. Ohio State also has issues on defense as their 50th ranked rush defense faces Wisconsin’s top ranked rush offense.

Baylor over Kansas State by 7.0

Boise State over Fresno State by 16.1

The divisions of Mountain West conference are as lopsided as Eastern and Western conference of the NBA. The 3 best teams (Boise State, Colorado State, Utah State) play in the Mountain Division. West Division champion Fresno State, ranked 85th in my team rankings, has a 12.8% chance to beat Boise State.