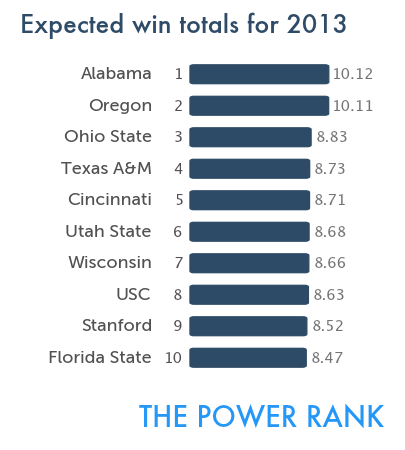 How many games will your team win this season?

That’s a crazy question to ask before the season starts. So many factors, from Johnny Manziel’s legal problems to the emergence of a freshman running back, can impact how a season turns out for a team.

There is no way to predict whether the left tackle’s knee with go out 4 games into the season. Or whether the 5 star recruit makes an impact on the defensive line.

But we’re going to ask about win totals anyways. Besides, sports books offer odds on it.

The Power Rank’s preseason college football rankings let us estimate win totals. Based on a regression model that considers past team performance, returning starters and turnovers, these preseason rankings have correctly predicted the winner of 70.5% of games since 2005.

The preseason rankings assign each team a rating, which gives an expected margin of victory against an average FBS team. Since 2005, a team’s preseason rating has been within 7 points of its final rating 72% of the time. Depending on your mood, that’s either a reason to jump for joy or sulk at the futility of trying to predict college football. I’ll let you decide.

The ratings from the preseason rankings also give a win probability for each game this season. Adding up these probabilities for a team gives an expected number of wins.

Alabama and Oregon have the most expected wins this season at 10.1. This should not surprise anyone, as these two teams are rated more than 6 points better than any other team in the preseason rankings.

At the other end, Georgia State is expected to win 1.7 games. Poor Panthers. Even though they play in the Sun Belt, it’s going to be a rough first year as an FBS school.

Let’s look at 3 teams whose expected wins in The Power Rank differ from the odds makers at Bovada. Only regular season games count towards these win totals.

No one should dispute Georgia as a top 10. My preseason rankings have them at 6th. However, win totals depend strongly on schedule. Georgia opens the season at Clemson (19th in preseason rankings). The odds say that Georgia has a 52% chance of escaping week 1 with a win.

Then South Carolina comes to town the next week, followed by LSU two weeks later. Along with their annual neutral site game with Florida, Georgia has only slightly better than even odds to win each game. Expect two losses in these 4 games.

Georgia also travels to Tennessee, Auburn, Vanderbilt and Georgia Tech this season. While the Bulldogs have greater than a 60% chance to win each of these games, a young defense could cost them one of these games. This puts them at 9 wins on the season.

After an incredible run to national prominence led by QB Kellen Moore, the Broncos are in year two of their rebuilding project. My preseason rankings have them 27th, good but not great.

Their schedule is brutal since they play their best opponents on the road. My predictions give Boise State less than a 50% chance when traveling to Washington, BYU, Fresno State and Utah State. The Broncos only have a 53% chance of winning at San Diego State.

These five games alone should put the Broncos below 10 wins.

You probably haven’t put much thought into the prospects of Florida Atlantic this season. And in terms of team strength, you should not expect much from Carl Pellini’s team. The Owls are 111th in my preseason rankings and must replace their QB and most of the offensive line.

But the schedule is favorable for Florida Atlantic. It starts with a home game against New Mexico State they should win. Then in conference, Florida International, Tulane and Marshall all travel to Boca Raton this season. Florida Atlantic will be favored in each of these 4 games and can expect to win 2 or 3 of them.

The Owls will also have a greater than 40% chance at Southern Miss, UAB and home against Middle Tennessee. They will benefit from playing in a terrible Conference USA East division in which 4 of 6 teams are ranked 98th or worse.

A terrible team can win 4 games in a division this bad.

With all the noise that comes with the preseason in college football, analytics can help you cut through the uncertainty. The Power Rank’s preseason rankings have correctly predicted the game winners of 70.5% of games since 2005. This general accuracy over all 125 FBS teams can help you find value in the market for win totals.

More of my analysis of win totals are available for members of The Power Rank. The sports books differ from my predictions on 6 more teams for the 2013 season.

Membership also includes access to my interactive team pages which let you instantly evaluate a game. To see how this works, click here.