…cue the Youtube videos of beer commercials featuring Jim Mora screaming about the playoffs, because we are going there today.

Ten weeks into the season the Power Rank seems to be stablizing quite well with few major jumps, as illustrated by last week’s article.  To build on that stable foundation I’d like to discuss something of importance that is looming on the horizon for many teams that aren’t from Carolina – the playoffs.

The playoff picture is especially interesting because of the field of teams that are competing for spots.  Both the AFC West and NFC West are so bad that teams low in both The Power Rank and NFL standings have a shot at glory in early 2011.

I decided to take a look into the crystal ball that is the Power Rank algorithm to get a peek at what the playoffs might look like this year.  I started by separating the conferences and placing them in The Power Rank order.  Then I highlighted who would be in the playoffs (if they started this week) based on Power Rank standings and on NFL standings. 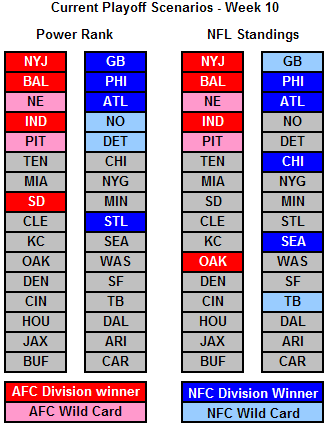 A few teams would be in regardless of whose standings are used, and their names should be no surprise to any follower of The Power Rank or of the NFL.  The Jets, Ravens, Patriots, Colts, and Steelers all seem to own five of the AFC playoff spots.  The Power Rank and the NFL standings agree on each of these selections, although The Power Rank does indicate that Tennessee still has a chance to make a solid bid for a wildcard spot.

In the NFC things are not so clear cut.  In both scenarios Philadelphia and Atlanta win their divisions, but these are the only two spots that appear in both playoff pictures.  Green Bay is also in both, although in the current NFL standings they would be a wildcard team and not a division winner.  It is not total agreement, but it is a solid indication that Green Bay is on the fast track to the playoffs.

The other three NFC playoff spots are taken by completely different teams in each list.  The Power Rank has New Orleans, Detroit, and St. Louis joining the top three teams of the NFC in the playoffs.  The NFL standings instead put Chicago, Tampa Bay, and Seattle in the hunt.  The difference between St. Louis and Seattle in the fight to win the NFC West is neglible, and both teams could easily find their way into the backdoor of the playoffs.

Tampa Bay has been finding ways to win games, but according to The Power Rank it’s all smoke and mirrors.  They are the lowest ranked team to be in the playoff hunt, and they’re doing it as a wildcard.  Do not be surprised to see this squad fall off the map in the next couple of weeks.

Chicago is making a solid bid for the NFC North title, and their early season win over the Packers has made the going rough for Green Bay fans who would like to see their team separate itself from the pack (no pun intended).  Chicago is ranked rather low but their classic defense and special teams oriented play is still making the big plays that produce results.

The most interesting thing to come out of the NFC North is the Detroit Lions, of former 0-16 fame, showing up in The Power Rank playoff picture.  The polar opposite of the Bears (again, no pun intended) the Lions seem to have an explosive offense and terrible luck that prevents them from translating their big plays into wins.  Remember that controversial Calvin Johnson non-touchdown in week one?  Don’t count the Lions out just yet. If they go on a nice streak they could break into the playoffs with critical momentum, much like the 2007 Giants.

The last team to discuss in the NFC is the Saints.  Yes, they have undoubtedly experienced a massive Super Bowl hangover.  Still, they are not as bad as they appear – they just aren’t living up to the hype that the media has piled onto this team.  Remember, they were a surprise in 2009 that was taken for granted as a 2010 contender and that’s a recipe for falling short of expectations.  The Saints are still a solid team that knows how to win, and they will most likely live up to their rank and make a strong playoff push in the final few weeks of the season.

By this point some AFC West fans are wondering why I didn’t mention the discrepency between The Power Rank picking the Chargers and the NFL taking the Raiders as AFC West division champs.  This division is tough.  The Chargers have played below their potential and have lost by poor special teams play.  The Raiders are playing well above their potential but the young squad seems to coming together and building steam which makes them a solid dark horse candidate.  The Chiefs haven’t kept up the winning ways of their early season success but are still a presence in this division.  In other words, this one is too close to call.

There are still seven weeks left in the season though.  Seven wins would put just about any team firmly in the playoffs, and seven losses would deny almost every team from entry so it may be too early to be making calls, but with such agreement between standings and ranking I find it hard to not start looking forward.