This prediction comes combining 3 different calculations (two of my own based on team rankings, FiveThirtyEight) for the outcome of Croatia versus France.

The numbers suggest a competitive game. France is the favorite, and they can win the World Cup if they play the fast, attacking style (think of their performance against Argentina) that optimizes their talent.

However, France could fall back on a lazier approach in which they cross balls into the box for headers with a low probability of a goal. Based on data before the tournament, crosses made up 23.5% of France’s successful passes into the opponent’s penalty area. This rate was the 15th highest among 32 World Cup teams.

French midfielder Blaise Matuidi seemed to suffer a concussion late in the semi-final against Belgium, but he is expected to play.

Croatia is a talented team that looked like the best team at the World Cup during the group stage. However, they have played 30 minutes of extra time in each of their three knock out matches, which makes fatigue a concern. Croatia looked lethargic in the first half of their semi-final match against England before coming to life with two goals after halftime.

Croatia goalkeeper Danijel Subasic appeared to hurt his right hamstring against Russia. He will play, but he may not be as strong going to his left, the spot where England scored off a free kick.

I turned on the Belgium versus England group stage match only to learn that neither team would play their best players. Sure, both teams had already advanced to the knockout stage of the 2018 World Cup before this match.

However, the team that wins the group would play Japan, the 36th ranked team by my predictive international soccer rankings. The second place team would face 9th ranked Colombia. It seemed like either England and Belgium could benefit from playing their top players against the opponent’s backups.

I expressed my displeasure at the situation on Twitter. Plenty of people shot back with an important point: the first place team gets placed on the side of the bracket with Brazil, France and Argentina. The second place team does play Colombia but otherwise only has to deal with Spain.

Belgium won 1-0 over England to win the group. But did they reduce their win probability by putting themselves on the difficult side of the bracket?

In the actual bracket, here are the win probabilities for the remaining 16 teams in the World Cup based on The Power Rank’s analytics.

I also ran numbers in which Belgium swapped places with England. What did I find?

England’s win probability drops only 0.1% on the harder side of the bracket. They would however have an easier time getting to the quarterfinals. With the swap, England has a 61% chance to advance past Japan. In the actual bracket, they have a 47% chance against Colombia.

The biggest change in win probability with the swap was Brazil. My numbers rank Belgium (4th) well ahead of England (11th). When Belgium swaps places with England, Brazil could not play Belgium in the quarterfinal, which results in a small increase of 0.4% in win probability.

One model is not enough

In 2004, Lasek and coworkers performed a study on which international football/soccer rankings best predicted matches. Among other results, they found a combination of rankings produced the best predictions.

In The Power Rank 2018 World Cup Analytics, you get my ensemble predictions for win probabilities after the group stage. To get this package, click on “I want this!”

France brings a formidable squad to the 2018 World Cup. This talent rich team has a 10.1% chance to win according to my ensemble numbers, 4th best among all teams.

The markets also like France. They not only have one of the best chances to win the tourney, but the markets say this France team will score 9.5 goals.

However, the numbers suggest this goal total is high. To analyze the tournament, I simulate it 50,000 times based on offense and defense rankings that take match results and adjust for strength of schedule. These simulations allow me calculate the win probability for each team.

Recently, I adapted my code so that it also calculates the number of goals each team scores. Note this team goal total depends on how far the team is likely to advance. Favorites like Brazil and France have the highest goal totals, while long shots like Saudi Arabia and Iran have the lowest.

The simulations give a goal total of 7.4 for France, much less than the market value of 9.5 goals.

We can dig further into the analytics to uncover why France isn’t expected to score up to their talent level. They tend to cross the ball, which leads to contested headers with a low probability of success. This is fine for less talented teams like the United States, but it’s a waste when you have strikers like Antoine Griezmann and Kylian Mbappe.

According to a recent article on FiveThirtyEight, crosses make up 23.5% of France’s successful passes into the opponent’s penalty area. This rate is the 15th highest among 32 World Cup teams and a travesty for a team with loads of attacking talent.

The Power Rank 2018 World Cup Analytics now has projected total team goals for all 32 teams. It also has the following:

To get The Power Rank 2018 World Cup Analytics, click on “I want this!” 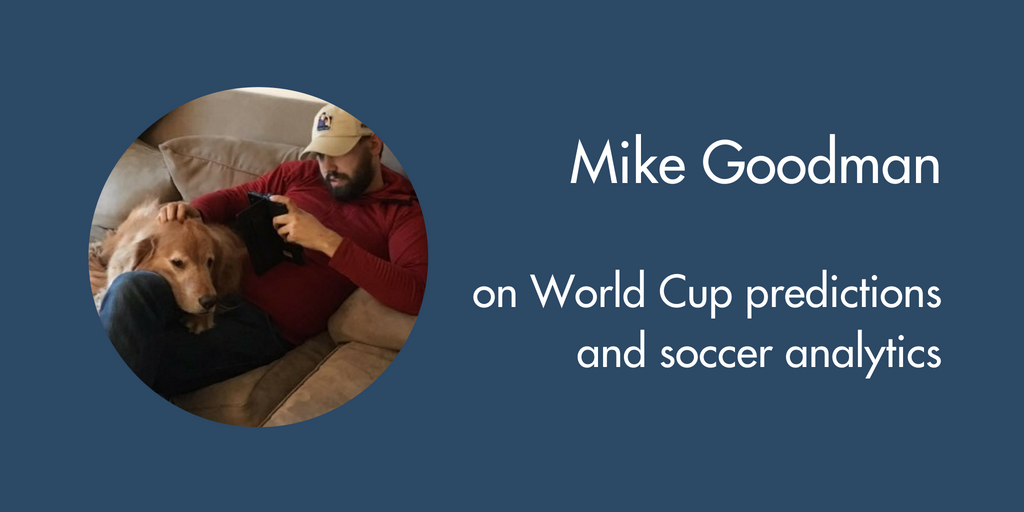 On this episode of The Football Analytics Show, I talk with Mike Goodman, a writer who explains the finer points of soccer analytics. His content has appeared on FiveThirtyEight, The Athletic and Grantland among other outlets, and he’s the managing editor at Stats Bomb.

In previewing the World Cup, we discuss:

Mike does such an excellent job explaining the analytics, and I highly recommend listening to get up to speed on analytics before the World Cup.

Historian Ron Chernow dominates the non-soccer part of the conversation that ends the show.

To listen to the show in iTunes, click here.

To listen to the show here, click on the right pointing triangle.