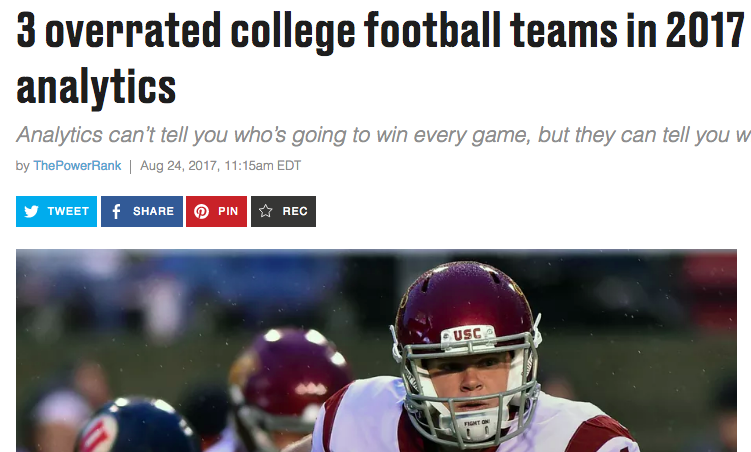 I had a sudden realization last week.

In a few media appearances, the hosts asked me about my surprise NFL teams for 2017. I had some numbers to help me, as I put together preseason NFL market rankings that you will see later this week.

Overrated teams are easy. Oakland went 8-2 in one score games last year, a record they’re unlikely to match this season.

However, I stumbled on which NFL teams might make the jump from mediocrity to elite this year.

Then it hit me: it’s way easier to pick overrated teams. Regression to the mean is inevitable for football teams that play such a short season. Teams that excel in 2016 probably had some good fortune that won’t continue in 2017.

For example, take the 2016 Atlanta Falcons. Heading into the season, OC Kyle Shanahan supposedly had a poor relationship with his players and got lucky to get a second season. In 2014 and 2015, Matt Ryan led only the 13th and 14th ranked pass offense by my yards per attempt adjusted for schedule.

Atlanta broke out with an amazing season in 2016, one that left them a few plays from winning the Super Bowl. Contrary to both objective and subjective opinion, the offense led the NFL in pass offense by just about every measure.

So there’s a good reason I write about 3 overrated college football teams on Football Study Hall each year. My regression model for preseason rankings naturally identifies those teams.

My predictions for overrated teams in these articles have gone 6-0 the past two years, although I tempted fate this year. To check it out, click here.