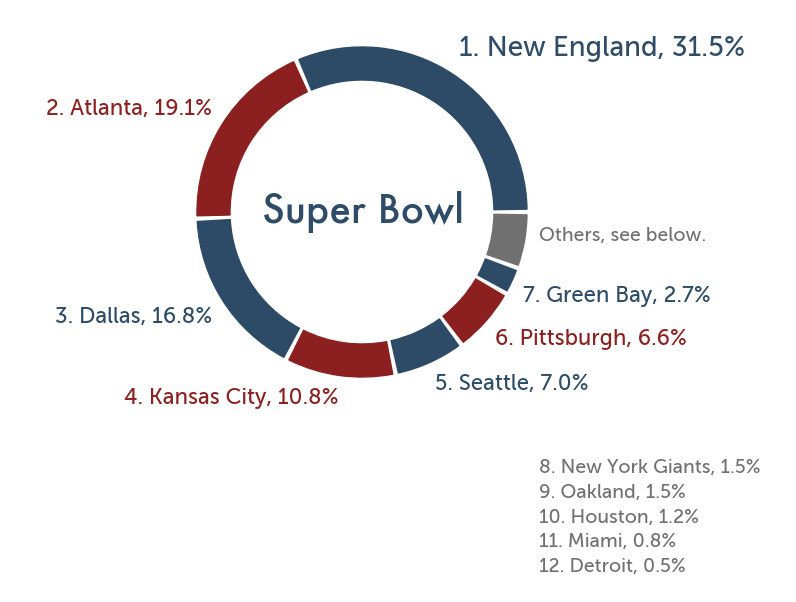 It’s not surprising that New England has the highest Super Bowl win probability.

No Rob Gronkowski, no problem. The offense has been fine so far without the elite TE, and Belichick machine marches on.

However, it might be a surprise that Atlanta has the second highest Super Bowl probability over Dallas.

Matt Ryan and the Atlanta has the top ranked pass offense by my adjusted yards per attempt. The pass defense has been respectable at 8th.

Dallas has had a fantastic season, but Dak Prescott is still a rookie quarterback. Will he hold up now that defensive coordinators have a season’s worth of tape to study?

Get a sample of my best NFL predictions

At The Power Rank, I combine predictions based on a number of different data sources to make the best possible football predictions.

It started with team rankings that take the margin of victory and adjust for strength of schedule. Back in 2008, I developed an algorithm that makes these adjustments, and you can see these points based predictions here.

The ensemble of predictions now contains calculations based on other data sources. For example, I use yards per play, a powerful efficiency metric, to evaluate teams.

These win probabilities start with my member predictions that combine data from a number of different sources.

The predictions imply a win probability for each team in each game, and these numbers provide the parameters to simulate the playoffs.

Each simulation accounts for the shifting match ups based on seed (e.g. New England will play the lowest seed after this Wild Card Weekend) and neutral site of the Super Bowl.