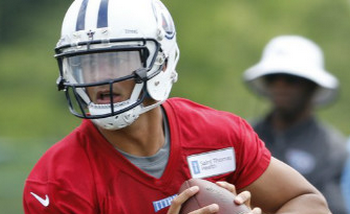 Fantasy football is so random.

Your buddy Jones picks up some rookie running back late in the draft and runs off with the league championship. Who can predict such things?

Even with the difficulty of predicting rookie performance, that doesn’t stop the quants from trying. Joseph Juan over at Numberfire makes the argument for Tennessee rookie QB Marcus Mariota (assuming he signs a contract).

The quantitative argument is flimsy, as it relies on a comparison with one other player (Cam Newton). But the article is worth a read if you’re in a fantasy football league.

To read the article over on Numberfire, click here.