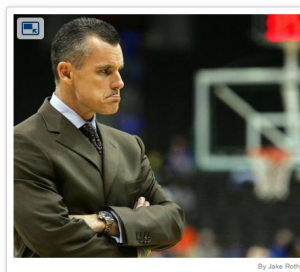 Florida hired Bill Donovan as coach in 1996. But ten years into his tenure as coach, his tournament record looked poor. Check out this five year stretch of appearances.

You may remember their first round game in 2002. Creighton guard Terrell Taylor hit a cross over, Jordanesque jumper to pull off the 12 over 5 upset.

You can hear the pundits right now as the Gators entered the 2006 tournament.

“He just doesn’t get his players ready for the moment.”

“Look at how he underperformed the last 5 years as such a high seed each year.”

Florida won consecutive national titles in 2006 and 2007. The pundits shut the fuck up.

You should never make judgements on coaches in a small sample size of tournament games. Florida played 158 games over those 5 years and won enough games to never get seeded lower than 5th. How can you restrict your judgement of Billy Donovan to 5 of those games?

A naive athletic director might have fired Billy Donovan after 2005. Each year, other athletic directors make hires based on success in the tourney, such as Andy Enfield at USC after his run with Florida Gulf Coast last season.

So next March, you’ll hear all kinds of talk about how Michigan State’s Tom Izzo is a great tournament coach. His Spartans just lost an Elite 8 game to Connecticut, a game no thought they should lose.

Next March, you’ll hear even more chatter about how Pittsburgh’s Jamie Dixon stinks it up in the tourney each year. However, Dixon consistently fields good teams at Pittsburgh. They will break through one of these years.

Here’s the truth: Tom Izzo and Jamie Dixon are both great coaches. So is Billy Donovan.

After 3 straight years of failures in the Elite 8, Florida advanced to the Final Four this season. It’s not his most talented team. The most highly touted NBA prospect, Chris Walker, barely plays after missing time early this season.

But the Gators bring the defense every game, ranked 2nd in my efficiency rankings that adjust points per possession for strength of schedule. Point guard Scottie Wilbekin gets all the headlines, but watch out for his back court mate Michael Frazier, a 45% shooter from 3 point range.

Their opponent Connecticut also brings the defense, ranked 11th in my efficiency rankings. On offense, point guard Shabazz Napier runs the show, but watch out for their shooters. They don’t take a lot of 3 point shots, but they hit 39% of them. Niels Giffey was hitting over 50% of his 3 pointers until he went 0-5 against Michigan State. Connecticut needs him or DeAndre Daniels to hit some shots to knock off Florida.

Florida has a 66% chance to beat Connecticut (predicted spread of 5.5).