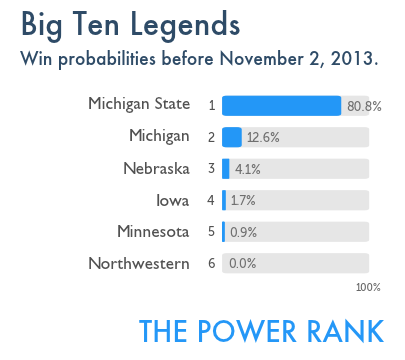 Michigan travels to East Lansing to play Michigan State in a critical game this weekend.

As shown in the visual, Michigan State has by far the largest chance to win the Legends Division. They will be even more firmly in control with a win over Michigan.

Michigan must beat Michigan State to have any chance of winning the Legends division. Can they do it?

Michigan State tops my defensive rankings by every measure. It doesn’t matter whether you consider overall strength by yards per play or break it down into passing and rushing through yards per attempt. This unit has been elite over the past few years and continues to improve under coordinator Pat Narduzzi.

Michigan brings in the 41st ranked offense based on adjust yards per play. This unit relies heavily on legs and arm of QB Devin Gardner. After a break out passing performance against Indiana, Michigan ranks 21st in adjusted yards per pass attempt. The passing game is the strength of this unit. They will need to get the ball downfield to receivers Jeremy Gallon and Devin Funchess to score against Michigan State.

Does Michigan State’s defense get fewer penalties at home?

When Michigan attempts to pass, they’ll find that Michigan State’s defensive backs get touchy feely off the line of scrimmage. The Spartans made headlines for the pass interference penalties called against them at Notre Dame, a game they lost by 4. Does this happen more on the road? The book Scorecasting by Tobias Moskovitz and Jon Wertheim suggests that the Spartans will get flagged more on the road. They showed that referee bias plays a large role in home field advantage.

However, the data does not show any definitive bias in Michigan State’s games. The Spartans has been flagged for 11 defensive penalties in 3 road games. 7 of these penalties came at Notre Dame. At home, the refs have called 15 penalties in 5 games. This unit gets flagged about 3 times per game.

Moreover, 6 of the 15 defensive penalties at home came against Indiana. Half of the penalties called against Michigan State’s defense have come against the 2 best opposing offenses, Notre Dame and Indiana.

The Spartan offense started the season as a joke. A unit from the prestigious Big Ten conference managed to rank 125 of out 125 FBS teams in offense. However, their performance has improved since QB Connor Cook took over for Andrew Maxwell. Michigan State now ranks 100th in adjusted yards per play.

A more accurate analysis of Michigan State’s offense would only consider FBS games with Cook: at Notre Dame, at Iowa, Indiana, Purdue, and at Illinois. In these games, Michigan State has gained 5.43 yards per play, better than their 5.29 value over the entire season. This analysis filters out kneel down plays at the end of games. This improvement equates to about 1.5 points per game, small but potentially significant.

Also, it should be noted that Cook has completed 60% of his passes, much better than the paltry 46% of Maxwell. That certainly points to improvement.

They face a Michigan defense ranked 60th in adjusted yards per play, the lowest rank since coordinator Greg Mattison took over 2 years ago. This unit has struggled to generate a pass rush without blitzing.

Both the line and my teams rankings predict a 6 point win for Michigan State. This still gives Michigan a 37% to leave East Lansing with the victory.

Even if Michigan does pull out the victory, they face an uphill battle to the Legends division title. Michigan State ends the season at Nebraska, at Northwestern and Minnesota, all games they have better than even odds to win. Michigan’s schedule features games with Nebraska, at Northwestern, at Iowa and Ohio State. They will not be favored to win the latter two games.