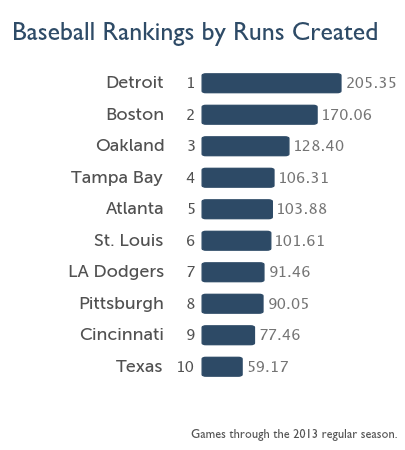 The St. Louis won more games than any other NL team this season, winning the Central by 3 games over Pittsburgh. Moreover, they’re ranked 2nd in The Power Rank while Pittsburgh is 9th. It should be easy to call a series win for St. Louis.

To dig deeper into these two teams, consider the idea of cluster luck. Some teams tend to cluster their hits together and score more runs. Other teams spread their hits out over the innings and score fewer runs.

One can quantify this luck using run creation formulas. These equations take box score statistics such as at bats and hits to estimate the number of runs a team should have scored. Deviations from this expectation are random.

You can read more about this in my cluster luck article on bettingexpert.

Cluster luck has some dramatic consequences on this series.

This season, the Cardinals have scored 60 more runs than expected, almost 3 standard deviations away from the mean. They scored more runs than any teams besides Boston and Detroit despite having average power numbers.

While the Cardinals have gotten lucky, the Pirates have not been so fortunate. They have scored 34 fewer runs than expected. Moreover, their league leading 577 runs allowed has not been the result of luck. This remarkable total is only one less run than expectation.

The visual above accounts for cluster luck by ranking teams by expected runs scored minus allowed. St. Louis only leads Pittsburgh by 10 runs over the course of the season.

To see the rankings of all 30 teams, click here.

While I originally looked into run creation a few years ago, Joe Peta, author of Trading Bases, inspired me to get back into the analysis. He has his own way of quantifying cluster luck that seems consistent with my work.

Joe thinks the Cardinals still have an edge. His preview shows that the Pirates pitching and defense was spectacular during the first half of the season but only average the second. In a 5 game series, he’s predicting Cardinals in 4.

Why should you trust his prediction? Joe took his methods to Las Vegas and turned a 41% profit. To read more, buy his book Trading Bases.

This series has a special meaning to me since two of my best friends root for the opposing teams.

I texted the Pirates fan a few weeks back about this cluster luck analysis. When the Pirates started to lose the division in the season’s last week, I got a death threat.

Cluster luck had an even more drastic effect on the Cardinals fan. Despite his Ph.D. in Mechanical Engineering from Stanford, he texted this back.

You have just made me doubt all numbers ever.