The talking heads on sports media will certainly share their opinion based on gut instinct. But wouldn’t it be cool to have a card counter’s edge in knowing who will win? An unbiased estimate of the win probability for all 16 teams? 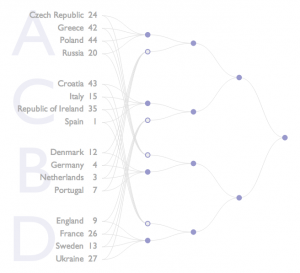 At The Power Rank, we crunch numbers to predict the outcome of tournaments. It begins with our algorithm for ranking teams, which has been more accurate than Vegas at predicting winners of college football bowl games. Then, we use these rankings to simulate Euro 2012 half a million times. Just like the mathematicians who used simulations to beat black jack, we analyze these results to provide a fresh perspective. Perhaps it’s a new view to share with your soccer fanatic friends.

If Poisson random variables means something to you, there’s a description of our methods at the bottom of this post. For everyone else, click here to see all of our predictions. Here, we’ll supplement the bracket with analysis of some important questions.

Still, a 23% win probability is not that large. If each team had an equal likelihood of winning Euro 2012, the win probability would be 6.25%. Spain is 3.7 times more likely to win the tourney. In this year’s NCAA men’s basketball tournament, the University of Kentucky had a 16% chance of winning. This is 10.9 times greater than the 1.5% probability assuming all 68 teams are equal. The European Football Championships are insanely competitive.

Who will survive the Group of Death?

The strength of this group is even more apparent from the tournament win probabilities. Denmark and Portugal both have about a 5% chance to win Euro 2012, a higher likelihood than any team from the Group of Eternal Life.

How will the host countries Poland and Ukraine do?

These two host countries present a problem for our rankings since they did not have to qualify for Euro 2012. We only use meaningful games such as tournaments and qualifying games to rank teams. This leaves us with only 10 and 12 games to evaluate Poland and Ukraine respectively since 2009. These games were from a failed World Cup qualifying campaign for both countries.

To see whether these countries had performed better lately, we considered friendlies involving Poland and Ukraine since the last World Cup. We added these matches to the set of matches used in our rankings. While the team ranking for the Ukraine barely changed from 31st to 32nd, Poland shot up from 96th to 44th. They’re still essentially the worst team in the tourney, but they’re no longer the 2012 Charlotte Bobcats of the NBA. Poland has clearly performed much better since their failed World Cup qualifying campaign, earning ties against full strength squads from Germany and Mexico.

There are many problems with using friendlies in our rankings. As readers of this site have pointed out, the rules are different (6 substitutions instead of 3), and teams treat these games as exhibitions to try new strategies. However, Poland and Ukraine probably treated these games more seriously since they didn’t have to qualify for Euro 2012. Moreover, the jump in Poland’s ranking is too large to ignore. We decided to use these additional games in our Euro 2012 simulations. With a 0.41 goal advantage as a host country, Poland and Ukraine have a 56% and 53% probability respectively to advance past the group stage.

Note: We have not used the friendlies for Poland and Ukraine in the primary world rankings. Sorry for the confusion, as the rankings on the interactive bracket do not match these rankings.

How did we perform these simulations?

The win probabilities in the interactive bracket are based on The Power Rank algorithm, a method that accounts for strength of schedule and margin of victory in ranking teams. While our team rankings show team strength for 119 countries, we take a different approach to generate win probabilities for Euro 2012. Instead of applying the algorithm to the entire team, we apply it to the offensive and defense separately. This leads to a goal rate for one team’s offense against another’s defense.

From here, we simulate the score of each game in the group round. The score comes from two uncorrelated Poisson random variables based on the goal rates. Moreover, the goals scored and allowed for each team lets us account for tie breakers in each simulation. The Poisson model also applies in the knock out stage. In the unfortunate case a game ends tied after 120 minutes, we pick randomly to determine a winner. Unfortunately, we don’t have the data or analytics to make a better guess about the outcome of a penalty kicks.

Is Poland really that good? Will you completely ignore these predictions because it includes friendlies for Poland and Ukraine? Please leave us a comment.