Six years ago, Boise State opened its season with a trip to Athens to play Georgia. Expectations were high, as Boise State won 13 games the previous year and quarterback Jared Zabransky was a preseason Heisman trophy contender. But Georgia beat down the Broncos, holding a 38-0 lead in the third quarter before Boise State got on the scoreboard. Zabransky ended up on the bench after 6 first half turnovers.

This weekend, Boise State travels south to meet Georgia again. The Power Rank gives us a means to compare the fortunes of these programs since their last meeting. Using the scores of all games played in Division I each year, the algorithm assigns each team a rating that estimates its strength compared to the average bowl subdivision team. Georgia’s rating of 7.7 means they would have an average margin of victory of 7.7 against an average team. 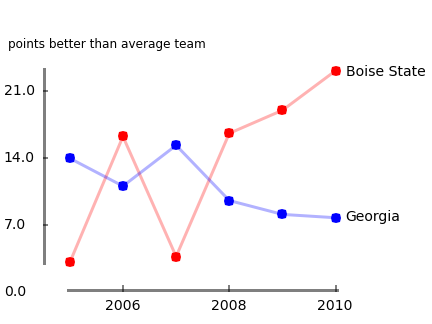 Chris Peterson took over as Boise State coach in 2006 when the now unemployed Dan Hawkins took the Colorado job. The Broncos went undefeated, earning a berth to the Fiesta Bowl against Oklahoma. In the greatest football game I’ve ever seen, Boise State used a hook and ladder play on 4th and a mile to tie the game in regulation, and then won in overtime with a statue of liberty play. After a down year in 2007, Boise State has become an elite college football team over the last three years. The team with blue uniforms and blue turf annually ignite the debate about college football’s unfair championship system.

After slipping a bit in 2006, Georgia rose back to the top of the SEC in 2007, sharing the SEC East title. They showed the strength of the SEC that bowl season by walloping a previously unbeaten Hawaii team 41-10. The defense was so physical that the announcers hoped that Hawaii would pull quarterback Colt Brennan so he wouldn’t get hurt in his last game. However, 2008 marked a turning point in the program. With quarterback Matt Stafford and running back Knowshon Moreno, the Bulldogs started the season ranked number one. However, they lost an early eason game to Alabama before two late season losses to rivals Florida and Georgia Tech. The program has slid slightly lower in the next two years, putting coach Mark Richt’s job security in question.

The Power Rank makes a prediction for each game through the difference in rating between two teams. For the upcoming Bronco Bulldog showdown, the algorithm gives Boise State by 15. However, there are many reasons to question this prediction. First, we have yet to quantify how a previous season’s rankings perform on early season games. Second, it’s a home game for Georgia, as they’ll drive the hour and a half from Athens to Atlanta while Boise State will fly across the country. Lastly, Georgia has talent. Coach Richt always recruits well, and his latest crop might be the best yet. Do these factors account for the 15 point distinction between these two teams? Do they narrow the gap past the line of 3.5 points in favor of Boise State? Probably not.