For new readers of The Power Rank blog, here’s a brief summary of the week four posting:

“If political strategist James Carville were an NFL pundit he might be telling us ‘It’s the defense, stupid!'”

At that time, the top teams in the Power Rank were defensive powerhouses, with the exception of the then and now offensively dominant New England Patriots.

Now that the NFC and AFC championship games are looming on the horizon, it is again apparent that strong defense is the key to success in the NFL.

The four teams that remain in the Super Bowl hunt are the Steelers, Packers, Bears and Jets.  All of these teams were defensive juggernauts this year.  In the regular season, they ranked 1st, 2nd, 4th, and 6th respectively in points allowed.   What happened to teams in 3rd and 5th place?  Last weekend the 3rd place Ravens lost to the 1st place Steelers, and the 5th place Falcons lost to the 2nd place Packers.

Just take a look at the how the top ten teams in The Power Rank correlate to their rank in points allowed during the regular season: 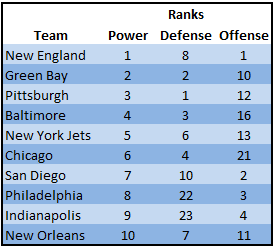 First, it’s clear that being highly ranked defensively was critical to making the top of The Power Rank this year.  More importantly notice the teams that made the playoffs, and teams still alive in the playoffs…  all of the teams that are still playing have elite defenses, but with the Patriots’ loss on Sunday the best offense left is that of the Packers, the 10th ranked offense in the league.

To see if this was a more universal truth of the NFL, I decided to do some more digging into the success of superior defensive teams in the playoffs.  I started with playoff results by defensive rank since 2002:

Not all seasons have been dominated by defensively superior teams, but overall there is definitely an emerging trend. 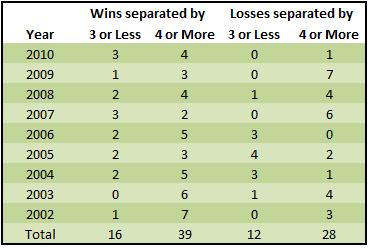 Now the 55-41 win rate by superior defenses shrinks to 39-28, whereas the record for games between similar defensively powered teams ended up at 16-12.

This result surprised me, since the win percentage for all three of the breakdowns are almost exactly the same:

Apparently the level of difference between the defenses didn’t matter as much as I thought it would.  Regardless of that difference, teams with a superior defense seem to enjoy about a 57% chance of winning in the postseason.  That’s somewhat significant but hardly dominant.

In fact, the only round where the defense seems to make a significant difference is in the divisional round where superior defenses have gone 25-11 over the last nine years, and have had a 69% chance of winning.  The better defense’s chance of winning in any other part of the playoffs?  An even 50%.

It seems clear.  Having the best defense on the field has only mattered for one week a year over the last decade.  The rest of the playoffs seem relatively unaffected by the strength of each team’s defense.

But why does the divisional round seem to favor defenses so much when the rest of the postseason seems utterly unaffected?  To be honest, I’m not sure.  I have some vague ideas, but listing them here would be nothing more than taking shots in the dark.  If you’d like to share your own theories, please feel free to leave a comment.