In 2012, our content began to appear in Sports Illustrated. 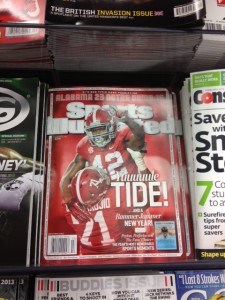 For the national championship game of the 2012 season, we previewed the game with a quarter by quarter narrative based on analytics. This was our first feature article for the magazine. The prediction, Alabama 23, Notre Dame 16, made the cover nationwide above Michael Phelps. Alabama’s predicted victory graced the entire cover in the south, as shown in this picture from the Memphis airport.

Most of the predictions worked out well. For example, Notre Dame allowed two rush touchdowns all season. However, their yards allowed per attempt suggested Notre Dame’s rush defense was not as strong as people thought. Alabama and running back Eddie Lacy ran all over the Irish. In fact, this weakness let the game get out of hand, making the final margin of victory larger than predicted. Still, the Crimson cover of the magazine gave the right prediction for the game winner. To read the analysis, check out the December 31st, 2012 issue of the magazine.

In the March 25th, 2013 issue, the magazine published some of our win probabilities for the 2013 NCAA men’s basketball tournament. They highlighted the 23.6% chance our numbers gave Florida Gulf Coast to upset Georgetown, the highest win probability among the 15 seeds. Florida Gulf Coast won that game and captivated the nation on their way to the Sweet Sixteen. The 43% chance we gave Mississippi, a 12 seed, to upset Wisconsin also worked out. However, Florida and their nation high 11.7% to win the tourney did not.

Breaking Down Wisconsin’s offense for the Rose Bowl

To start the 2012 season, Wisconsin’s offensive line played so poorly that they got their position coach fired after two games. They stormed back to run away from Nebraska in the Big Ten championship game behind a punishing rush offense. We looked at their rush offense after adjusting for strength of the opposing rush defense. The infographic in the article shows that they improved over the season, but not as dramatically as it appeared.

Wisconsin also played 3 quarterbacks during the season. Our analytics showed that freshman Joel Stave was a far better passer than Curt Phillips, the quarterback who would start against Stanford in the Rose Bowl. In the game, Phillips played well, making some key plays with his legs. However, Stave came in for a play and threw a perfect pass to his receiver in the end zone. The receiver dropped the ball. Stave never entered the game again, and Stanford won a tight game 20-14. To read the article, click here.

In 2012, Kent State was 17th in the BCS rankings before they played in the MAC championship game. With a win, they could move up to 16th or higher and earn a BCS bowl bid. But how did a team that lost by 33 points to a 2-10 Kentucky team make it so high in the rankings? Part of the reason was a flawed computer poll that didn’t consider the team to which Kent State suffered its lone loss. To read the entire article on SI.com from November 28th, 2012, click here.

Armed, Not That Dangerous

We take college football statistics such as yards per pass attempt and adjust them for strength of schedule. Then we visualize the results of an offense next to an opposing defense. These visualization are the heart of our premium college football content. Sports Illustrated printed the visual for Alabama and LSU in the November 5th, 2012 issue. You’ll need the print magazine to see the visual, but you can read the accompanying text here.

The text highlighted the strength of Alabama’s pass defense versus LSU’s pass offense. However, LSU quarterback Zach Mettenberger turned into Andrew Luck against the Crimson Tide and almost led the Tigers to an upset victory.

Midway through the 2012 season, Alabama seemed invincible. The only apparent chink in their armor was total offense. Gaining 439.6 yards per game put the Crimson Tide 39th in the nation after 8 weeks of the season. However, yards per play told a different story, as we described in the October 29th, 2012 issue of the magazine. To read the story in the top right sidebar, click here (login required).

In football, yards per play is a key metric that indicates an offense’s ability to move the ball or a defense’s ability to prevent it. After 3 weeks of the 2012 season, we used yards per play to identify 4 overrated teams in the September 24th, 2012 issue of the magazine. Three of these teams, Oklahoma, South Carolina, and Texas, had disappointing seasons compared with their early season AP rankings. The fourth team, Ohio State, went undefeated after surviving a number of close games in Big Ten play. To read the article, click here.