See below for a quick explanation of this visual.

The football team pages show all the key statistics for a team on a single page. The college football pages evaluate offense and defense by yards per play adjusted for schedule and further break this down into passing and rushing.

For the NFL, the team pages uses success rate adjusted for schedule. For the offense, a play is a success if they gain this fraction of necessary yards for a first down:

A few features to note:

When I prep for radio and podcast appearances, I pull up these visuals to get an instant snapshot of both the predictions and match ups.

However, the most useful aspect of the team visual are the match up stats. To understand how this works, consider this visual for rushing in the 2012 national title game between Alabama and Notre Dame. 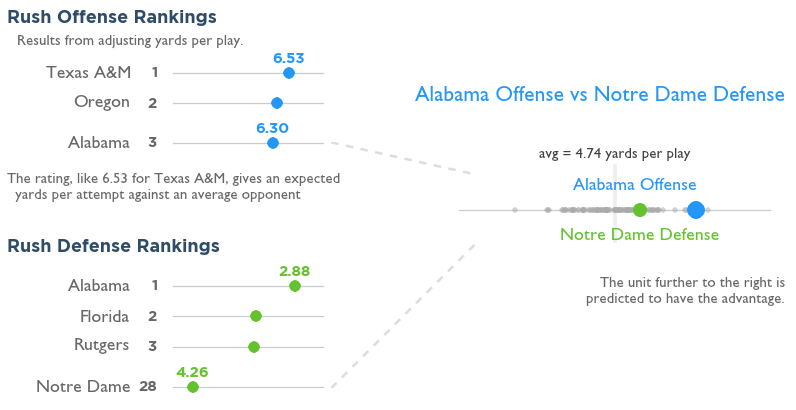 Match up visual for Notre Dame and Alabama before the 2012 title game.

In the new visual, the defense appears on the same line as the offense. To see this, click on an opponent in the schedule above. You’re really looking at how a unit’s statistics deviate from average, so it makes sense to put both units on the same line.

The team pages let you instantly evaluate a football game.

To become a member of The Power Rank, click here.