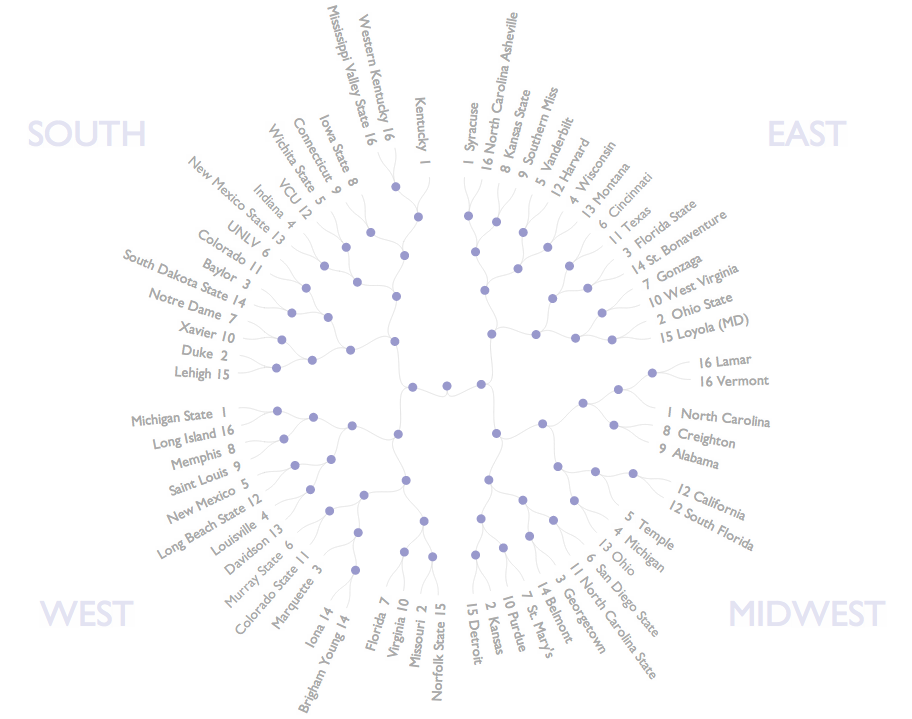 When the field for the NCAA tournament was announced in 2012, The Power Rank unveiled its interactive bracket. The bracket exemplifies our mission in sports analytics. It contains the 416 win probabilities for each team in each game of the 2012 NCAA Men’s basketball tournament. Will your team win? This is our answer.

The bracket spread rapidly through social media, and I soon got a call from Amy Nelson at SB Nation. She had just launched Full Nelson, a series of weekly sports documentaries, and wanted to do one on our March Madness analytics. Of course, we were thrilled. She and her team flew out to the Bay Area to make this fantastic 5 minute video. Check it out!!

In the video, we filled out a bracket based on our numbers. So how did it do?

How to win a March Madness pool

Winning a NCAA tournament pool goes far beyond the probabilities in our interactive bracket. You can’t just pick the team with the highest probability in each game. In 2012, this bracket would have Kentucky (the Anthony Davis, Michael Kidd-Gilchrist version of this one year NBA prep program) as the champion. You would fare well in the pool but not win. People like my Grandma, who does not know the difference between a basketball and football, also picked Kentucky to win. Moreover, she picked Ohio and North Carolina State in the Sweet Sixteen, two dark horse teams that made the second weekend in 2012. She wins the pool based on shear luck. The larger the number of entrants in a pool, the more likely someone makes some startling picks that win the pool.

In a big pool, one needs to look for undervalued teams. The Power Rank gave Ohio State almost a 12% chance to win the tourney, the second highest likelihood after Kentucky. If you pick Ohio State and they actually win, your bracket picks up 63 points (1 for the first round, 2 for the second round, all the way up to 32 for winning the championship game). More importantly, it’s unlikely that many other people picked Ohio State as the champion. On Yahoo, only 4.5% of brackets did this. In a pool with 100 entrants, 4 people will pick Ohio State on average. Your bracket only has to do better that 4 other people in the early rounds.

For more details about picking an optimal bracket, see this excellent article by Galen Hall. I used these concepts to fill out Amy’s bracket.

The ups and downs of rooting for a bracket.

Amy’s bracket did pretty poorly after the first weekend. For example, it had Kentucky, Wichita State, UNLV and Duke in the Sweet Sixteen from the South region. Only one team, Kentucky, made it that far. When we shot the final scenes for the documentary, we knew the bracket was suffering. I even mention that we didn’t pick the bracket to win the first weekend.

A week later, the bracket surged, sporting 3 (Kentucky, Ohio State and Kansas) Final Four teams. Amy would pick up another 64 points, the total points available in the first two rounds, if Ohio State beat Kentucky in the national championship game. With the only bracket with Ohio State as champion, she would easily win the SB Nation pool. However, this scenario had only a 18% chance based on our numbers. Even after picking 3 Final Four teams, the odds of winning a competitive bracket are still rather small.

In the semifinal game in New Orleans, Ohio State faced off against Kansas. While the Jayhawks were down most of the game, their defense took Ohio State out of their half court offense. Kansas coach Bill Self might be the next Coach K, a leader that can motivate his players to a higher intensity level in March. A late game surge, capped with an off balanced layup that 6′ Elijah Johnson somehow got over 6’8″ Jared Sullinger with a minute to go, sealed the victory for Kansas. Amy wasn’t winning her pool with this bracket. She finished 10th out of 23 people.

However, picking Ohio State was still the best strategy for this pool with 23 participants. Had she picked Kentucky over Ohio State in the championship game, she would have finished 4th at best. The top seven brackets all had Kentucky as the winner, and the winning bracket had Ohio and North Carolina State in the Sweet Sixteen. Go Grandma.

But does that mean The Power Rank is worthless? No. Using our win probabilities, or maybe even those of Ken Pomeroy or Nate Silver, gives you an edge against the competition. It’s like counting cards in black jack. In the long run, people like Jeff Ma made a lot of money in Vegas based on a small edge against the dealer. Does that mean he won every hand? No. Did he win every time he doubled down on 11 against a 6 up card from the dealer? As he details in his book The House Advantage, no.

You’re not going to win every March Madness pool using The Power Rank. Amy had about a 12% chance to win her pool, since she needed Ohio State to win. And for those that believe in the power of numbers in the long run, the NCAA tournament is particularly frustrating since the opportunity arises once a year. But do you want to be Jeff Ma and have a movie made about you? Or do you want to be the person who keeps hitting on 17 expecting that 4?