The BCS calculus for Notre Dame is simple. Beat USC on Saturday and play in the national championship game. Can the Fighting Irish do it?

Most of the headlines focus on Notre Dame’s defense. Led by linebacker Manti T’eo, the Fighting Irish have allowed 10.1 points per game, best in the nation. With the injury to USC quarterback Matt Barkley, Notre Dame’s defense will most likely have a good day.

But what about Notre Dame’s offense?

The raw statistics suggest Notre Dame has a poor offense. For example, the Fighting Irish pass for 211 yards per game, a number that includes negative yards from sacks. Their 74th ranking places them below average nationally.

However, total yards per game is a misleading statistic.

Yards per game depends on how many times a team throws the ball. Notre Dame doesn’t throw the ball as often as the spread offense of West Virginia. Using simple division, we divide total pass yards per game by the number of attempts to obtain a better metric of pass offense. Notre Dame averages 6.83 yards per pass attempt, 51st best in the nation.

Simple division turns a below average pass offense into an above average one.

Dividing total yards by the number of plays lets us account for the pace of the football game. It is analogous to the tempo free statistics that Dean Oliver introduced into basketball. Looking at points per possession shed a new light on offenses that didn’t fast break and looked for the best possible shot late in the shot clock. Yards per attempt is the first step in incorporating these ideas into football.

Match Up With USC’s Defense

At The Power Rank, we take yards per pass attempt and adjust it for strength of schedule. Since Notre Dame has played top pass defenses such as Stanford, Michigan State and Oklahoma, our algorithm bumps up their pass offense from 51st to 28th. Their rating of 7.04 gives a predicted yards per attempt against an average pass defense.

Below, we show how our adjusted numbers for Notre Dame’s offense match up with USC’s defense. A better defense has a blue dot further to the right. Then the unit with the dot further to the right is predicted to have the advantage in the match up. By overall yards per play, Notre Dame’s offense enjoys a slight advantage over USC’s disappointing defense. 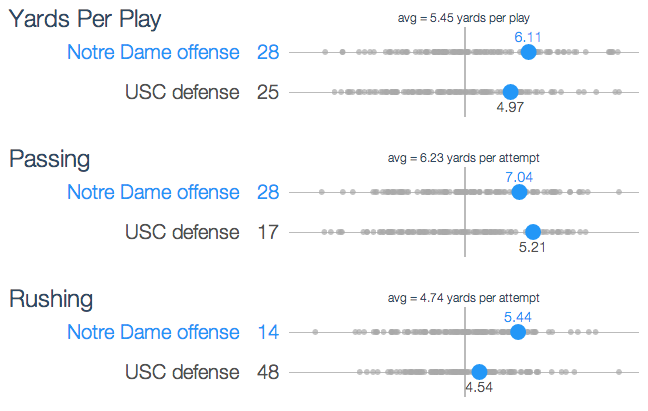 These visuals appear on our interactive team pages, the heart of our premium college football product. For more information, click here.

Our team rankings predict a very even game (USC by 0.3 points). However, these numbers reflect a USC team with quarterback Matt Barkley. The Vegas line has Notre Dame as a 6 point favorite.

Is the injury to Barkley worth 6 points? We’ll find out Saturday.

When Alabama lost to Texas A&M this weekend, it left no undefeated SEC teams. In response, my friend Chris Haddock, a family practice doctor and raging Georgia Bulldogs fan, posted this on Facebook:

UGA has one win against a BCS Top 10 opponent. Florida has three. Alabama has two. Comined Kansas State, Oregon, Notre Dame have ZERO. Nada. Zilch. If the SEC Championship Game winner doesn’t play for the national championship then it is a tainted title to whichever of these undeserving non-SEC teams wins.

Since the SEC has won the last 6 national championships, many will share this sentiment.

And our numbers agree. Alabama only dropped to 2nd behind Oregon in our rankings, and 6 of the top 10 teams come from the SEC. With this many good teams in a conference, you expect every team to lose at least once.

The question becomes whether the SEC champion, either Alabama or 7th ranked Georgia, makes the BCS title game. For this to happen, two of these 3 teams must lose.

Somehow, I don’t think I’ll be able to publish Chris’s next post if Notre Dame squeaks past USC and into the national title game ahead of the SEC champion.

For those of us keen to inflict extra embarrassment upon the lame duck BCS system, there’s a 33.1% chance that at least 3 of these teams remain undefeated.

Thanks, Alper. We appreciate others doing work for us 🙂 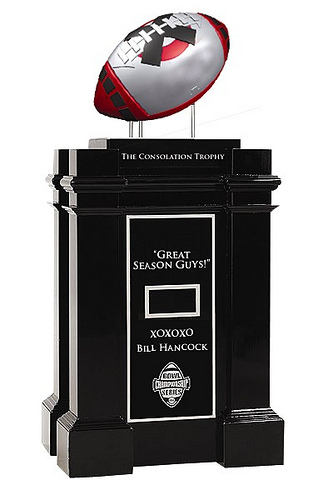 There’s always a long road before true success. Gary Patterson’s road started in Davis, California. In the 80’s, this sleepy suburb of Sacramento had an innovative football program that won 20 straight conference championships in Division II. Boise State coach Chris Peterson and former Oregon coach Mike Bellotti both spent time at UC Davis. In 1986, Patterson got the job as co-linebackers coach, a position that paid $1,500… at the end of the season. He made ends meet through the generosity of others. It wasn’t glamorous, but Patterson learned about the flex defense that Tom Landry developed with the Dallas Cowboys, the foundation for the record setting defenses Patterson has coached at TCU.

In the late 90’s, Patterson found himself as the defensive coordinator at TCU when head coach Dennis Franchione left for Alabama. His old boss told TCU that Patterson wasn’t ready to be head coach. The school disagreed, and Patterson has turned TCU into an annual contender. Franchione, on the other hand, is now the coach at Texas A&M… oh wait, he resigned after going 19-21 in Big 12 play in 5 years. No, he’s the coach at Texas… oh wait, they would never hire a guy who sold a secret newsletter about this team at Texas A&M. Franchione recently took the head coaching job at Texas State. At least the Bobcats step up to the top subdivision of Division I football next year. Coaches may want to think twice before leaving a good situation with a great defensive coordinator.

Gary Patterson has brought TCU to the pinnacle of college football, winning 99 games over the last ten years and the Rose Bowl over Wisconsin last year. But this year, the Horned Frogs are one of those teams that make early season rankings so hard. They lost senior quarterback Andy Dalton, 4 of 5 starters on the offensive line, and 6 starters on defense. In their season opener, TCU lost 50-48 to a Baylor team they thumped 45-10 last year. Patterson’s secondary, which returns no starters from last year, gave up 6 touchdown passes and 14.3 yards per pass attempt. This past week against Air Force, TCU won 35-19 but the defense gave up 5.8 yards per carry compared to 4.5 last year against Air Force. With these two weak performances from the defense, it’s not clear whether this TCU team will end up 7th or higher in The Power Rank at the end of the season. This week, we highlight other teams whose early season rank might not reflect their true strength.

2. Oregon. The Ducks lost 3 offensive linemen and 6 starters on defense. They make this list largely due to their 69-20 win over Nevada this weekend. Nevada ended last season 11th in The Power Rank, but they might not sustain such a high rank this year. While they ended 2010 with a 15.0 rating, they averaged a -1.6 rating the 5 seasons before that. So Oregon’s win this past weekend might not mean as much by the end of the year.

4. Auburn. The Tigers lost quarterback Cam Newton and only had 6 returning starters overall. Last week, they should have lost to Utah State at home. However, they rebounded this week to beat 19th ranked Mississippi State by 7 at home with a brilliant goal line stand as time expired. But it’s reasonable to question whether Auburn will end the season as high as 4th.

36. Notre Dame. Thank you, fighting Irish, for having two turnovers within twenty yards of Michigan’s endzone. Thank you, Irish, for giving up 28 points in the fourth quarter. The Power Rank made its first prediction in which some common sense about turnovers modified our calculations. While we said Notre Dame would cover the 3 points they were favored by, they lost by 4 when Michigan drove 80 yards in 0:28 for the winning touchdown with 0:02 left in the game. We would make the same call every time. While many expected Notre Dame to content for a major bowl this year, their performance so far this year makes a rise in the rankings questionable.