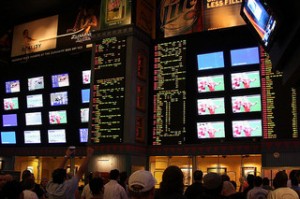 The gambling markets harness the wisdom of crowds.

After bookmakers set a line each morning on NBA games, bettors put money into this marketplace. Sometimes, this money moves the line. Just before tip, the line closes at a point spread which gives a predicted margin of victory.

But can we do more with these closing point spreads?

Determine the top team in the NBA since the All-Star break?

Make a prediction between any two teams?

The closing point spread is an estimate of margin of victory. It also works as an input to the ranking algorithm. This results in what I call market rankings.

To gauge team strength heading into the playoffs, the market rankings below consider point spreads from the All-Star break through the end of the regular season. The record denotes how often Vegas predicted that team to win or lose (2 games had a point spread of 0 which count as a tie). Just like with the team rankings, the rating gives an expected margin of victory against an average NBA team on a neutral court.

Somewhat surprisingly, Oklahoma City appears at the top of these market rankings. With the return of Russell Westbrook, the Thunder went 16-11 in regular season games after the All-Star break. The market rates a 24-5 San Antonio team 1 point worse.

In general, these market rankings are very similar to the team rankings that use all regular season games as input. No team has a rating that differs by more than 2.5 points between these two rankings.

The market assigned Brooklyn the highest improvement over the year long team rankings (2.5 points). This makes sense given their improved play since the New Year.

On the flip side, the market adjusted downwards most for Philadelphia, who were 2.1 points worse in the market rankings than the team rankings. The Sixers tanked their season at the trade deadline by getting rid of Evan Turner and Spencer Hawes.

Let’s look at 3 other insights from these rankings.

The Pacers kissed the wrong girl and got mono.

Indiana had a 40-12 record heading into the All-Star break. They looked like legitimate title contenders. Then after kissing the wrong girl at the break, the Pacers have suffered through a 16-14 record and -2.2 average of margin of victory.

However, the markets still like Indiana. The market rankings put Indiana 7th, 4 points better than average. In comparison, team rankings that consider games from the All-Star break through the end of the regular season rank Indiana 21st, 2.6 points worse than average.

Indiana hasn’t fared well against Atlanta in the playoffs, down 2-1 so far. They look lost even on defense, unable to stop Jeff Teague. The Pacers need to find their early season form quickly. The markets believe this can happen.

During the off season, Brooklyn traded for future Hall of Famers Paul Pierce and Kevin Garnett. Along with Deron Williams and Brook Lopez, the Nets looked like NBA title contenders.

The Nets have played better since the New Year. They entered the playoffs with 43 wins, and Pinnacle gave them a 60% chance to win their first round series against Toronto despite the lack of home court advantage.

The market rankings disagree with these odds. Toronto is ranked ahead of Brooklyn, although the teams only differ by 0.2 points. However, this difference does imply 57% win probability for Toronto in the series.

Brooklyn might match up well against Toronto, which could explain the series odds that favor Brooklyn. The Nets did win one of two games in Toronto to start the series. However, these series odds are inconsistent with the market rankings.

The Grizzlies ended the regular season 13th in the team rankings. However, they struggled early and then lost center Mark Gasol for December and part of January.

It seems like Memphis has hit their stride since the All-Star break. They have a 21-9 record since then, and the markets rank Memphis 6th and a significant 4.3 points better than average.

And unlike Indiana, their play suggests the markets are accurate. Memphis is up 2-1 against Oklahoma City and look at least the equal of the Thunder on the court. Their unselfish play contrasts the push and shoot style of Russell Westbrook.

The gambling markets can provide some powerful insight into teams. I’ll be doing much more of these calculations as football season approaches.