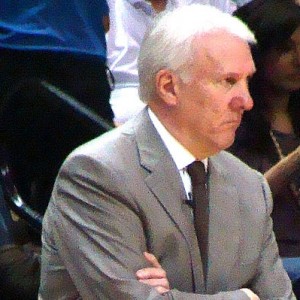 Editor’s note: To celebrate the 1000th win of Spurs coach Gregg Popovich, I turn to the comedy of Jonathan Rowe. Jon is a former lawyer and author. He wrote this email to Craig Ross, author of a new book on Michigan football, about how Gregg Popovich should deal with sideline reporters. I find it endlessly amusing.

I’ve been thinking about your idea that a coach or athlete being asked what Bill Russell called “the wrong question” should NOT just ignore the journalist’s question and walk away, as Russell so famously did, so many times; instead he or she should simply “rephrase the question”, as we lawyers say, and answer the question s/he would prefer to answer, instead of the idiotic one being asked.

I think your idea is so brilliant, ALL teams should teach this skill to their celebrity coaches and players.

But more to the point, I feel you NEED to send this idea ASAP to Gregg Popovich — the Samuel Beckett of the NBA, and the current master of the absurdist “protest” non-answer-answer.

To be sure, Pop’s long-running schtick is VERY amusing, as in:

This is obviously BRILLIANT dinner theater; and also lovely minimalist dialogue. But I believe Pop, like Samuel Beckett in his later years, has wrung ALL that can be wrung from his personal MINIMALIST Theater of the Absurd. Like the late Beckett, Pop is on the verge of becoming a parody of himself.

But imagine THIS exchange, if Pop were enlightened, by Craig Ross channeling his inner Bill Russell:

Doris: “Pop, what’s the problem the Spurs are having on offense?”

“‘Pop, do you think your team’s offensive struggles this quarter are a result of poor preparation by you and your wildly overpaid assistant coaches; or the fact that your players are all multi-millionaire corporations whose attention is frequently difficult even for you overpaid coaches to obtain; or was it just plain bad luck for you Spurs that Kobe decided to actually play DEFENSE for an entire quarter, for the first time since he was in JUNIOR HIGH SCHOOL somewhere in northern Italy?’

“And my answer to THAT question, Doris, is: ALL OF THE ABOVE.”

Doris (looking totally SHOCKED, but realizing that Pop, regardless of his Russell-inspired intransigent LIP, is STILL contractually obliged by the NBA’s contract with ESPN to answer one MORE question, no matter how idiotic): “And what are the problems the Spurs are having on defense?”

Pop: “Again, Doris, NOT the right question. But once again I’m going to answer the far better question Bill Russell would have asked me, if you had a half a brain and actually took two minutes to THINK about your questions, instead of just spouting them off faster than a garden hose someone forgot to turn off:

“‘Pop, did the Lakers just score 32 points on your team in one quarter because Phil Jackson really IS the Zen-Master he pretends to be; or was it just because Kobe has even less conscience than Pistol Pete in his prime, so Kobe took 12 shots that were so selfish any coach with real STONES would have benched him for taking those shots; except that Phil, who is after all DATING the Owner’s Daughter and also knows that LA fans love Kobe even though all his teammates HATE him, stood like a statue while Kobe missed the first four by a combined 12 feet, but since Kobe hit the last eight in a row, will now no doubt credit “the Triangle” for creating those shots Kobe hit, which were in reality so bad even Pistol Pete in his prime would have passed on them all; and even though any trained statistician could tell you Kobe’s 8-for-12 this quarter was just a random statistical variance that happens in the Universe, from time to time, no matter how selfish a player’s shot selection may be, and no matter how pussy-whipped his alleged coach may be?’

A variation of THIS interview — even allowing for the fact that ‘Dr. Phil’ no longer coaches the Lake Show (since he’s currently presiding over the gruesome Viking funeral of the Knicks) — could happen, Dr. Ross; but only if you clue Pop in, ASAP.

The time is NOW, CR.
Pop’s no spring chicken; and neither are you.
Nor, for that matter, am I.