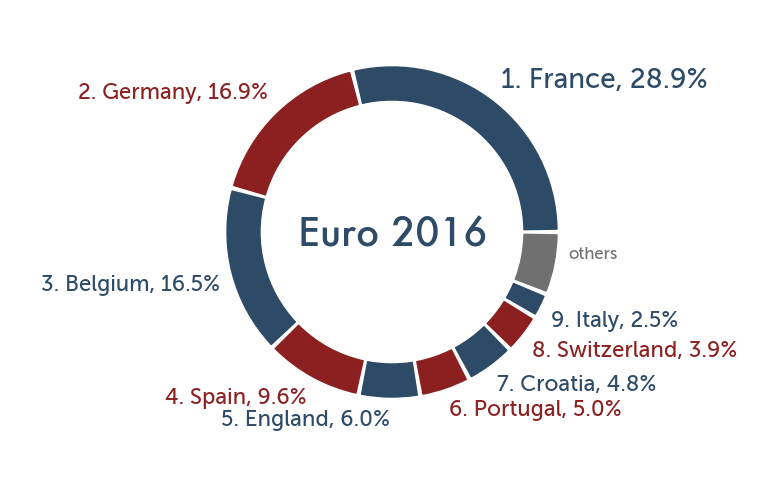 These win probabilities come from my world football/soccer rankings, which performed favorably in predicting matches according to an academic study.

The Economist cited this study in a recent article.

A few notes on the results.

Here are the win probabilities for Euro 2016 at the knock out stage for all 16 teams.

I’m frequently at Tootsie’s, an Italian restaurant and cafe at the Stanford Barn with amazing food. When I asked the owner Rocco about Italy before the start of Euro 2012, he said, “We suck”. After Italy tied Spain in the first game, he proclaimed, “We’re going to win Euro.” When I told him Italy had a 36% chance to advance over Germany in the semifinals, he kicked me out. Well, no, but Rocco reflects the optimism of Italy as they face Spain in the final fixture of Euro 2012. The Power Rank gives Italy a 37% to win Euro 2012 over Spain.

Let’s break this down further, shall we?

What assumptions go into this win probability?

This prediction involve three steps. First, we use our core algorithm to rank the offense and defense of each country. Second, we employ these rankings to generate goal rates for Spain against Italy and vice versa. Third, we plug these goal rates into a model to get a score, both at the end of regular time and over time. In this model, we assume the goals scored by each team are independent of each other.

From a soccer perspective, this negative correlation coefficient could mean that teams play more defensively when they take a lead. With match details beyond the final score, one could determine if goals rates are different based on the score. If so, that suggests a better probabilistic model for the final score than the independent Poisson random variables we use now.

If the game goes to penalty kicks, we flip a coin. Spain and Italy would then have a 50% chance to win Euro 2012. This model seems consistent with popular opinion, as an ESPN commentator has talked about the complete randomness of penalty kicks. Moreover, it’s difficult to imagine a better model since there is such little penalty kick data for each player.

Will Spain score against Italy?

In our rankings, Spain has the 4th best offense in the world. We predict they would score 2.16 goals against an average defense. However, this goal rate probably depends on who plays up top. When Ferrando Torres enters the game, the Spanish game transitions from a crisp passing game to an offense interrupted by offsides penalties on Torres. Spain plays much better with Cesc Fabregas at this attacking position.

Our ranking have Italy as the 25th defense in the world, despite giving up only 0.71 goals in meaningful competition since the start of World Cup 2010 qualifying. Our methods predict they would concede 0.79 goals to an average offense. However, Italy’s rating might suffer from weak competition in European qualifying matches. You can’t concede less than 0 goals to the Faroe Islands, the 107th best offense in the world. Italy’s defense features 3 defenders from a Juventus team that allowed only 0.53 goals per game in Serie A.

Will Italy score on Spain?

While Mario Balotelli has received most of the attention after his 2 goals against Germany, play maker Riccardo Montolivo is the key to this Italian offense. He made the pass found Balotelli behind the German defense for his second goal. Moreover, Montolivo made a number of incredible passes against England that led to missed goals for the Italians. Italy has the 17th best offense, predicted to score 1.76 goals against average international competition.

However, they face a stout Spainish defense, 3rd best in the world with a 0.44 rating. The Spanish haven’t conceded a goal since Italy’s Antonio Di Natale scored in the first match of Euro 2012. While known for their short passing game, Spain has a defense that has played a huge role in their Euro 2008 and World Cup 2010 victories. Can Sergio Ramos, the Val Kilmer of soccer, lead a defense that wins a historic Euro, World Cup, Euro triple crown?

At the beginning of Euro 2012, The Power Rank assigned Croatia as the 46th best team in the world. This was the worst ranking among the 16 teams. Then a reader pointed out in the comments that Croatia is 8th in the FIFA rankings.

That is a massive difference.

We looked into this further and found two World Cup qualifying games against England in which Croatia lost 9-2 on aggregate. Since our algorithm considers margin of victory, these games greatly depressed Croatia’s rank. When we do not consider these two games in the rankings, Croatia jumps from their current 33rd ranking to 22nd.

We have no explanation why FIFA ranks Croatia 8th.

Then this morning, Marin from Croatia left some insight to his national team. Through apologies for his English and an F-bomb, he essentially says his team is bipolar. Either they believe in themselves and can beat any team in the world, or they wake up on the wrong side of the bed and lose to Georgia. Marin ends by saying, “I love my country, but I really hate to watch any game, any sport where a Croat or Croatia play because that day I will have a headache.”

So Croatia is the VCU of international soccer. In last year’s NCAA men’s basketball tournament, VCU made an epic run from last team in to the Final Four. Point guard Joey Rodriguez even admitted that they didn’t take some of their conference opponents seriously, a move that almost left them out of the tournament. They decided to play once the big dance started, winning 5 games on their way to the Final Four.

Against Italy today, Croatia managed a 1-1 tie after a beautiful finish from Mario Mandzukic in the second half. Croatia has a 3% chance to win Euro 2012 and make our methods seem a little silly. For all of our most updated win probabilities, click here to see our interactive bracket.

Too many long balls over the top. Too many shots from outside the box. Not enough crisp passing between players forming triangles all over the field.

Did Italy’s defense take Spain out of their game? Probably not, as our algorithm ranks Italy’s defense 25th in the world. This isn’t the type of ranking one expects for a country famous for their catenaccio system.

Maybe it’s just Spain’s first game this tourney. Or maybe this core group of players is past its prime. We’ll find out in their next match against Ireland.

Spain’s odds to win Euro 2012 dropped from 22.6% to 21.5%. This is because Croatia beat Ireland today, putting them in control of this group with Italy and Spain. Croatia’s increased chance of making out of the group stage dropped Spain’s odds of advancing from 83% to 80%.

For our most updated win probabilities, click here to see our interactive bracket.