Armen Williams and Levack from 104.5 The Team (ESPN Radio in Albany, NY) interviewed me yesterday. We talk about college football, the playoff and all the big games for week 12 of the 2014 season.

It was a blast. On some interviews, I only talk with the hosts during the interview. Even though they were running late, Armen and Levack took time to chat with me before the interview.

And no one else has asked me whether I could beat Andrew Luck at Jeopardy.

You can also listen to the interview on Youtube. 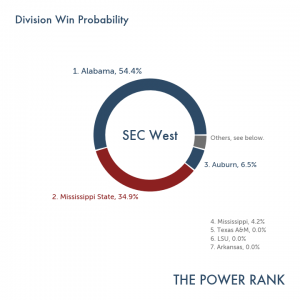 After week 11 of the college football season, the selection committee for the playoff has only one SEC team in its top 4. Undefeated Mississippi State tops the rankings, but TCU jumped over Alabama for the 4th and last playoff spot.

Is the strength of the SEC finally catching up with the conference? After week 11, four of the top six teams in my team rankings hail from the SEC West. All 7 teams are in the top 20. As these teams beat each other up, it seems doubtful any team will have few enough losses to make the playoff.

However, the numbers suggest the SEC will most likely get 2 teams in the playoff. Let me explain.

Mississippi State has enjoyed a magical season in which they remain undefeated and QB Dak Prescott has shot up the Heisman polls. However, life gets more difficult as they travel to Alabama this weekend.

Alabama looks like the most balanced team in the nation. I rank offense and defense by taking yards per play and adjusting for schedule. Alabama has the 7th and 2nd ranked offense and defense respectively. Miami, a team discussed later, is the only other team with two top 10 units.

In contrast, Mississippi State has the 9th ranked offense but the 37th ranked defense. Quarterback Blake Sims and the Alabama offense should get their points against this defense.

In The Power Rank’s ensemble predictions, which aggregate a number of predictors, Alabama is an 11 point favorite to beat Mississippi State. The markets started by favoring Alabama by 7, but this spread jumped to 9.5.

The glory of not playing in the SEC championship game 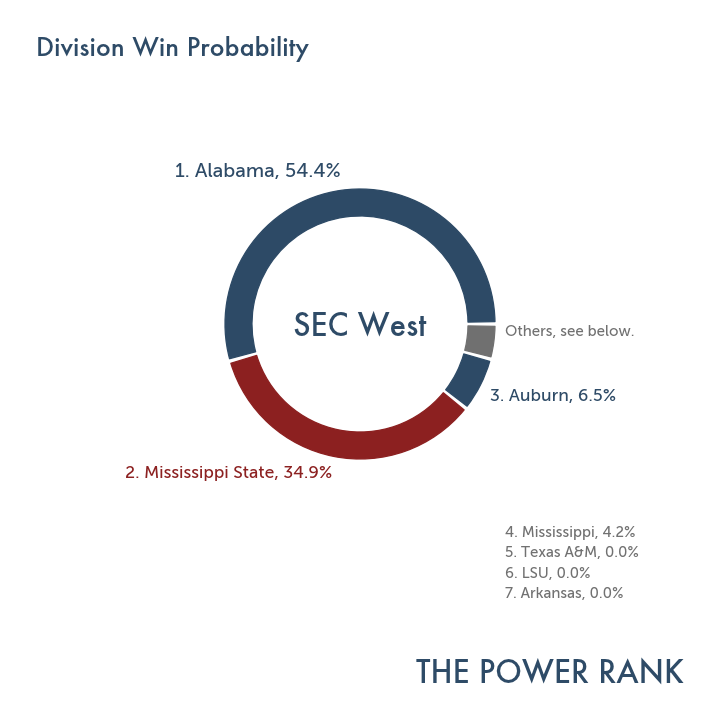 But Mississippi State doesn’t have to win the SEC West. If they lose to Alabama, they will drop in the committee rankings but perhaps not too far. Remember, this would be their first loss, and the committee might keep them in the top 4.

If Mississippi State wins their remaining games but finishes 2nd to Alabama in the West, they won’t play in the SEC championship game. But this is a good thing. The selection committee drops teams after a loss, just like the polls. This means it’s bad to lose late in the season. Mississippi State can’t lose the last week of the season if they don’t play.

We saw this type of phenomena in the BCS era. In 2011, Alabama lost to LSU during the regular season and finished 2nd in the SEC West. They stayed at home the last week of the season but earned the second spot in the national title game over Oklahoma State.

The SEC East could also have huge implications for the selection committee. This weekend, Auburn travels to Athens for a game against Georgia. Both teams feature high powered offenses that should score plenty of points.

Georgia gets running back Todd Gurley back for the game. This is one factor that drove the markets to open with Georgia as a 2.5 point favorite.

However, you have to wonder how much impact Gurley will have when his backup Nick Chubb has averaged 6.7 yards per carry. Our ensemble predictions give Auburn a slim 0.5 point edge on the road.

Despite trailing Missouri in the SEC East standings, Georgia (7-2, 5-2 SEC) has a 49.4% chance to win the division. This probability will only go up if they beat Auburn in their last SEC game. Missouri (7-2, 4-1 SEC) still has 3 conference games, two against tough SEC West opponents (Texas A&M and Arkansas). 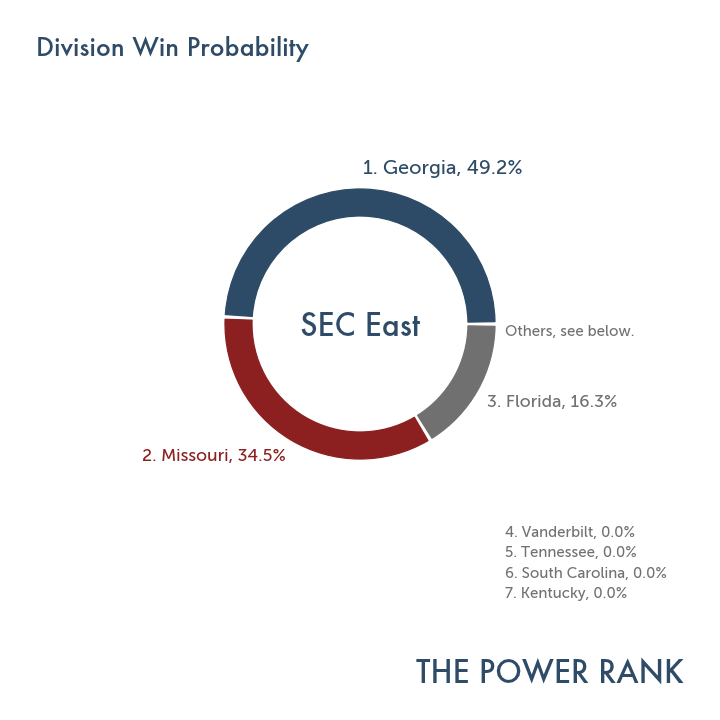 If Georgia wins the East, they will most likely be a significant underdog in the SEC championship game. However, Georgia almost certainly makes the playoff if they win the game. The current 15th ranked team in the committee rankings would have earned a top 4 spot, which will make it even more impossible for the committee to determine the top 4 teams.

Here are a sample of the ensemble predictions I’ve been working on with Mike Craig, my partner in the prediction service.

The first number gives a predicted point spread, and a negative number implies a win for the home team. The second number is the total points scored.

All of these math predictions are available to members of The Power Rank. 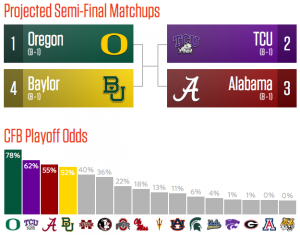 My latest projections for the likelihood that each team makes the college football playoff are up on Bleacher Report.

Each week, I take the latest committee rankings and simulate the remainder of the season. The method uses analytics to determine a win probability for each game and captures potential match ups in conference championship games. To read more on my methods, click here.

Over on Bleacher Report, I also provide analysis on the results. Here are the 5 hot topics of the week. 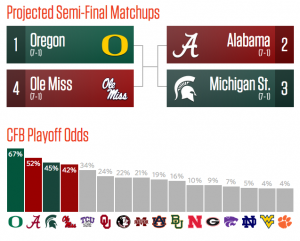 What do the first selection committee rankings mean for the college football playoff? What can analytics say about the odds that each team ends up in the top 4 on December 7?

First, let’s recognize the limitations of analytics. Numbers won’t tell you how far Auburn will drop if they lost a 5 overtime game to Ole Miss this Saturday. I also have no adjustments for committee politics or how much Mike Tranghese hates the ACC.

However, analytics based on margin of victory and yards per play lets us accurately forecast the win probability of each game. With some reasonable assumptions on committee behavior, computer simulations give the playoff odds for all 25 teams in the first committee rankings.

To see the playoff chances for your team and read my analysis on Bleacher Report, click here.