This episode of The Football Analytics Show is the second of two with Adam Stanco of the Pac-12 Network. He’s a hoops expert and educates us on:

Michigan faces off against Villanova tonight in the championship game of the 2018 tournament. Villanova has a 81% win probability by my numbers, and a 75% implied chance according to the markets.

However, this game fascinates beyond analytics and markets. I follow this Michigan basketball team and watch most of their games. It’s an opportunity to combine numbers with basketball insight.

Here are 3 key insights into Michigan versus Villanova.

How Michigan and Villanova play defense

Jay Wright’s teams always play great defense. Based on my points per possession adjusted for schedule, Villanova hasn’t ranked worse than 11th the past 3 seasons.

Heading into the 2018 tournament, Villanova ranked 19th on defense. I thought this might be a flaw, as their biggest player Omari Spellman stands only 6’8″. However, their defense rank has risen to 12th heading into this championship game.

Despite their lack of size, Villanova has athletic, long wing players like Mikal Bridges. Michigan will see flying limbs when they shoot, much like their Elite Eight game against Florida State.

In contrast, John Beilein isn’t known for defense. When Michigan made the championship game against Louisville in the 2013 tournament, they finished 39th on defense that season. Michigan played their best defense towards the end of the season as they entered the tournament 59th in the nation.

However, Michigan’s defense has improved dramatically over the past two seasons. Heading into tonight’s championship games, they rank 4th in defense. When the offense sputtered against Florida State and Loyola Chicago, Michigan’s defense carried them to victory.

Michigan is particularly good at not allowing opponents to shoot 3 pointers. Opponents take 29.8% of their field goal attempts from 3, which makes Michigan 5th best in the nation at preventing 3 point shots.

In addition, Ken Pomeroy has shown that 3 point field goal rate is useful in predicting future games. This means Michigan should be able to limit Villanova’s 3 point attempts.

Point guard Jalen Brunson runs Villanova’s high powered offense, ranked 1st by my points per possession adjusted for opponent. However, he will face a tough test in Michigan’s Zavier Simpson, an elite defender.

My guess is that Simpson will get close to Brunson so he can’t shoot a jump shot. In addition, Brunson is left handed, so Simpson can shade him to his right. Simpson will trust his quickness to recover should Brunson drive to his right.

Simpson won’t be able to shut down Brunson. However, slowing down the leader of the Wildcats is key to pulling off the upset.

Villanova has a much better offense (1st) than Michigan (25th) by my points per possession adjusted for opponent. A big part of this edge is three point shooting, as Villanova has made 40.1% compared to 35.7% for Michigan.

However, these 3 point shooting rates have inherent error. For a Michigan team that has taken 988 attempts, their true 3 point percentage has a two in three chance to be between 34.4% and 36.9%.

To guess whether a team’s shooting percentage is higher or lower than their true skill, we can look at how a player’s rate compares with previous seasons.

For Michigan, Moritz Wagner and Muhammad-Ali Abdur-Rahkman have shot the same percentage from 3 as last year. However, Duncan Robinson’s 38.7% this season is down from his 42.4% and 45.2% the past two seasons.

Some of this change comes from better defense, as every opponent knows Robinson can shoot. However, he has missed his share of wide open 3 point shots this year. I don’t think he’s a worse shooter now than the past two season. Robinson is most likely better than this 38.7% this season, and Michigan will need this shooting against Villanova.

For Villanova, Jalen Brunson, Mikal Bridges and Donte DiVincenzo have all shot career highs from the 3 point range. And they probably didn’t just get lucky with their shooting this season. Players can improve their shot with practice in the gym during the off season.

However, whenever a team is top 10 in the nation from 3, you can expect regression. In addition, Brunson, Bridges and DiVincenzo played big roles on last year’s Villanova team that shot 36.9% from 3. They will especially difficult against a Michigan defense designed to not allow open 3 point shots.

Michigan and Villanova shoot a ton of 3 point shots, as they take 43.2% and 47.5% of their field goal attempts from 3 respectively. The shots will fly, and we will see a small sample size of the results.

If Michigan can get fortunate with the 3 point lottery, it will help their efforts to pull off the upset.

The RPI, the Rating Percentage Index used by the tournament selection committee, does use data to rank 351 college basketball teams.

The preseason polls do not. Pollsters submit their ballots before seeing any games much less collecting data on them.

So the RPI must be a better predictor of tournament success than the preseason polls, right?

Over on FiveThirtyEight, I wrote about how the preseason polls are better predictors of tournament success than the RPI. The wisdom of crowds beats bad mathematics.

In the article, I highlighted three teams from the current season.

First, I noted how Duke and Michigan started the season ranked 1st and 2nd respectively in the preseason AP and Coaches polls. This suggests both of these teams have the talent to make a deep tournament run despite not living up to their potential during the regular season.

Duke looked fantastic this past weekend, beating a solid Rhode Island team 87-62 to make the Sweet 16. In contrast, Michigan State shot 26% from the field to get stunned by Syracuse.

The article also highlighted Virginia, a team the committee deemed the number one overall seed but didn’t make the top 25 in either preseason poll. Before the tournament started, I had questioned whether Virginia had the NBA level talent necessary to win the tournament.

In no way does this suggest Virginia would lose to 16 seed UMBC. However, the preseason poll suggested this was a tiny bit more likely than any of us expected. 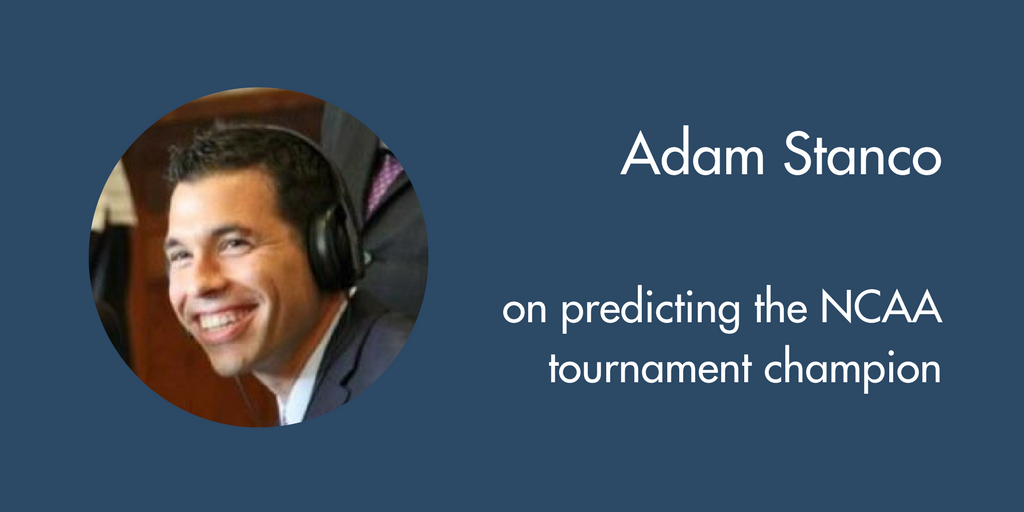 I continue my conversation with Adam Stanco, producer at the Pac-12 Network and hoops expert, on teams that can win the 2018 NCAA tournament.

In Part 1, we discussed Virginia, Villanova, Duke and Cincinnati. In this Part 2, we get into these topics:

On this episode of the podcast, Adam Stanco, producer on the Pac-12 Network and hoops expert, joins me to break down the teams that can win the 2018 NCAA tournament.

We focus on primary contenders because the choice of champion is the most important choice you will make in filling out your bracket.

This is part 1 of my conversation with Adam. In Part 2, we will break down another set of teams that could win the tournament.

To listen on the site, click on the right pointing triangle.