I’m all about numbers for making predictions at The Power Rank. Head over to the predictions page on any given day of the year outside the MLB All-Star break to get a good idea of how a game should turn out.

With the NCAA Tournament title game tonight, the numbers give Villanova a 1.2 point edge over North Carolina.

And why not? Villanova has been on a tear, capped by a 44 point annihilation of Oklahoma in the Final Four.

However, these numbers are on the wrong side of this game. Let me explain.

My algorithm tends to weight games against good teams more, and Villanova had some good fortune from behind the arc against quality competition. Their 50% from three over the last 4 games (35-70) is significantly better than their 33% entering the tournament.

I also calculate market rankings based on the closing point spreads in the markets, a predictor not as affected by the noise of game results. These numbers rate Villanova about 1.2 points worse than North Carolina.

The markets have held steady at North Carolina by 2.5 points. That might be a bit high, but I do think the talented Tar Heels should have a better than 50% chance to beat Villanova. 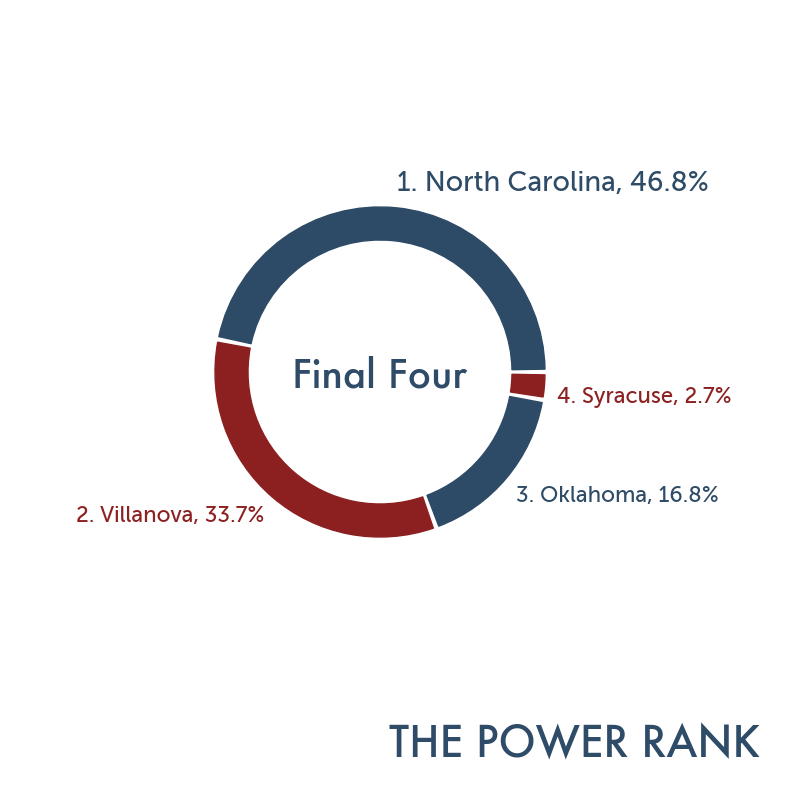 Which team will win the Final Four? A talented North Carolina is the clear favorite, as my numbers give them a 47% chance to win.

However, three other hungry teams will attempt to knock off the Tar Heels in Houston. In a year of college basketball parity and complete March insanity, can one of these teams do it?

Let’s break down the four teams.

Before the tournament, I wrote this about the Tar Heels.

However, there’s something not quite right about this team. They don’t feel like the top team in the nation when you watch them play.

North Carolina has looked every bit the championship contender. There were plenty of pre-tourney signs that said they would arrive at the Final Four as the front runner.

Of course, North Carolina has had their share of good fortune as well. They didn’t have to play Kentucky, West Virginia or Xavier, the other top teams in the East Region by my numbers.

Prior to the start of the tourney, North Carolina didn’t have the best odds to win partially due to this tough region. The numbers like Kansas out of a weaker Midwest region.

Now, North Carolina is a clear Final Four favorite, and my numbers give them a 47% win probability.

Before the tourney, I warned people about picking Nova as champion. The Wildcats took 44% of their shots from three, and these high volume three point shooting teams tend to not win the tournament.

However, Villanova has shifted their offensive strategy over the last three games. Against Iowa, Miami and Kansas, the Wildcats have taken 33% of their shots from three. They no longer live by the three, die by the three.

Over these three games, the Wildcats have shared the ball. No one player has taken more than 11 shots except for Jason Hart (18) against Kansas. With their typical stellar defense, Villanova made the Final Four.

Villanova has also had their good fortune. They shot a blistering 59% (20-34) from three against Iowa and Miami in comfortable double digit wins, much better than their 34% average for the season.

Against Kansas, Villanova didn’t shoot that well. However, Kansas had a miserable shooting game from three (4-18). It got painful watching Wayne Selden miss shot after shot from behind the arc. The pain reminded me of watching Mike repeatedly call a girl in Swingers.

Villanova is 2nd in my team rankings with a rating a hair below top ranked North Carolina. These rankings would predict a toss up between these two teams in the title game.

However, my team rankings probably overestimate Villanova. My algorithm tends to weight games against good teams more, and Nova had some good fortune from behind the arc against their last 3 quality opponents.

I also calculate market rankings based on the closing point spreads in the markets, a predictor not as affected by the noise of game results. These numbers rate Villanova about 1.5 points worse than North Carolina, and I expect that to be the line should these two teams meet in the final.

The Sooners are on a roll, as they blew threw the West region to secure a Final Four berth. Buddy Hield earned almost mythical status with 37 points against top seeded Oregon in the regional final.

Oklahoma came through on their 38.5% chance to make the Final Four by my numbers, highest of any team in the West Region. However, I still see flaws with this team.

Oklahoma takes a high rate of three point shots (41% of their field goal attempts). In addition, they have hit on 43% of these three pointers, a rate destined to regress against better defenses in the Final Four.

The markets have Oklahoma as a two point underdog against Villanova, and all of my calculations agree with this point spread.

But wait. Didn’t Oklahoma beat Villanova by 23 points this season? Yes, but the Sooners got blessed with good fortune from three point range. They shot a blistering 14 of 26 from three, while Villanova struggled in going 4 of 32.

My calculations do consider this game, but it’s one of 30 some games that contribute to my team rankings. Looking over a more complete body of work, Villanova is the better team.

Oklahoma can certainly beat Villanova, as a just a bit of jump shot luck can easily make up 2 points. However, Villanova defense ranks 5th in the nation by my points per possession adjusted for strength of schedule. Good looks from three will not come easy.

The odds should favor Villanova to beat Oklahoma.

Many pundits thought Syracuse shouldn’t have made the tournament at all.

The Orange lost to a woeful St. John’s team this season and couldn’t even win their first game in the ACC tournament. And perhaps this wasn’t surprising, as Syracuse didn’t get a single vote in the preseason AP poll.

However, the committee did select Syracuse. And in a year of college basketball parity, Syracuse made the Final Four as a 10 seed.

To make the Final Four, Syracuse beat Virginia when they Malachi Richardson hit a series of contest three point shots. Can this continue against North Carolina? Probably not, as my numbers give them only a 15% chance to pull the upset.

Before the start of the 2016 tourney, members of The Power Rank had access to these ensemble win probabilities.

No one predictor is perfect, and research has shown that combining predictors leads to more accurate predictions. These ensemble win probabilities include one part each from my numbers at The Power Rank, FiveThirtyEight and Ken Pomeroy and two parts the implied probabilities from the markets.

I was most interested in getting the balance between Michigan State and Virginia in the Midwest right. My numbers gave Virginia a 14.3% win probability with Michigan State trailing behind at 10.2%.

However, I thought my numbers couldn’t capture this Michigan State team. They lost leader Denzel Valentine for part of the season, and Tom Izzo’s teams outperform the pre-tourney expectation given by my numbers.

The markets liked Michigan State, as they made them one of the pre-tourney favorites along with Kansas and North Carolina. The ensemble gave an ever so slight edge to Michigan State over Virginia, which I found intuitively correct.

The contrarian pick as tournament champion

The ensemble also gave Virginia a lower win probability (10.5%) than my numbers (14.3%). However, only 4.7% of brackets submitted to ESPN picked them as champion, which still makes them the contrarian pick for champion.

The randomness of the tourney made all predictors look silly as 15 seed Middle Tennessee State upset 2 seed Michigan in their first game. The underdog hit 11 of 19 three point shots and ran away with a nine point win.

However, I still trust in the ensemble numbers from before the tournament. One game will not change that.

Win probabilities before the Sweet 16

After an unforgettable opening weekend of the tournament, I’ve recalculated the win probabilities for the remaining 16 teams.

These are my numbers only, not an ensemble.

Virginia gets a bump in win probability now that they can’t face Michigan State in the Midwest region final. Tony Bennett’s team has an almost one in five chance to win the tourney.

However, North Carolina gets the largest bump in win probability. First, they posted easy wins in their first two games, perhaps not surprising given Roy Williams’ tournament history since 2002. These games boosted North Carolina’s rating in my college basketball rankings, which drive these win probability calculations.

Second, North Carolina also sees a depleted field in the East region. My numbers like Kentucky more than Indiana, but the latter team will face North Carolina in the Sweet 16. On the other side the region, West Virginia and Xavier both lost.

To check out all the round by round probabilities for the 2016 tournament, check out this interactive visual.

The remaining teams have less than a 1 in 1000 chance, so don’t pick them as champion in your pool.