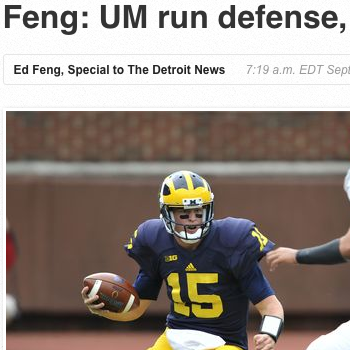 Over at the Detroit News, I looked at Michigan through efficiency numbers and previewed the BYU game.

By yards per play, Michigan’s run defense looks amazing. In fact, the entire defense has been terrific.

On offense, the passing game hasn’t been great but looks better by the numbers than many would expect.

At the end of the article, I previewed the BYU game and stated that my prediction of Michigan by 5.5 was probably low. (I did a better job with the preview in this article.) Michigan won 31-0 in a dominating performance.

It’s the last weekend in September, and it’s time to separate the contenders from pretenders in college football. Let’s look at some games.

Michigan by 5.5 over BYU

There are 3 reasons I think this prediction might be low.

First, Michigan has a really good defense. As expected, they have played well in all 3 games this season. However, you might brush off the UNLV game as too poor an opponent to draw any conclusions.

However, UNLV gained 493 yards on 5.67 yards per play in their opener against Northern Illinois. Last week, Ohio State had 298 yards on 4.52 yards per play against the same defense.

This in no way says that UNLV has a better offense than Ohio State. Variance plays a huge role in these results. In addition, UNLV QB Blake Decker was a little banged up against Michigan.

However, this suggests we can take seriously the 235 yards on 3.79 yards per play Michigan’s defense allowed against UNLV.

Second, Michigan’s defense faces BYU’s back up QB Tanner Mangum, who took over after Heisman caliber starter Taysom Hill got hurt. Mangum, a former four star recruit who recently returned from his Mormon mission, has looked solid in 3 games.

However, luck has played a big role in his results. He threw a 42 yard hail mary to win the game against Nebraska. In addition, Boise State’s secondary let his receivers get behind them twice for gains of 80 and 74 yards. This most likely won’t happen against Michigan.

Third, there’s the Jake Rudock factor. Many Michigan fans have seen the QB’s play as shaky through 3 games. However, he’s completing 65% of his passes for 6.14 yards per play, just below the college football average.

I don’t think it’s time to worry about Rudock. He’s made some bad throws, some of which have resulted in interceptions. I expect his play to improve.

Get the rest of my best predictions

I save my best college and pro football predictions for members.

However, each week, I offer a sample of these predictions to the curious football fans who sign up for my email list. This content (except for samples like the BYU at Michigan preview above) doesn’t appear on this site.

To get all of these predictions, sign up for this free email newsletter. It goes out at 2pm Eastern on Friday afternoon.