Do you hate the typical tout site that sells picks? These sites hype a 6-1 record from last week. You know you could flip a coin a day and end up with 6 heads in a week.

You’re less of a gambler and more of an investor. You know that analytics and hard work can get you an edge in the markets, especially in college football totals.

However, you probably don’t have the time to do the research yourself. We have a solution for you. 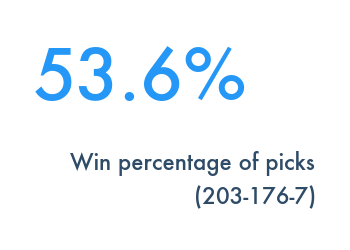 The college football prediction service combines Ph.D. level math with years of betting experience to find value in the markets.

The prediction service makes picks for sides and totals, both for the game and the first half. The visual shows our record since the beginning of the 2014 season.

This is unsolicited praise for the prediction service on Twitter:

Ed, I have been around sports betting for 40 years. I think your Business Model is The Gold Standard for sports predictions.

The foundation of the prediction service is the ranking algorithm of The Power Rank. Ed developed this method from his Ph.D. research at Stanford on the physics of molecules and the math of randomness.

Let’s look at how it evaluates offense and defense in college football.

These yards per play ratings on offense and defense drive our predictions for point spreads and totals in college football. We then apply subjective factors such as injuries to the math predictions to determine the final picks.

The Power Rank’s college football prediction service combines analytics with human judgment to give you the best possible picks.

It starts with a ranking algorithm that does for college football what Google’s PageRank did for web search: brings order and insight into a messy system.

We then apply human judgment to the numbers to find the most valuable picks. We think of college football as an investment. Mike has made a living on it for the past ten years.

We believe in transparency and track all of our picks. The visual shows our record since the beginning of the 2014 season.

We can’t guarantee we’ll win every season. College football has too few games to offer enough valuable plays. However, we strongly believe our methods give you the best chance to win in the long term.

Get the college football prediction service for Bowl Season

The prediction service for the 2016 bowl season offers the following.

We will release our first set of game selections on 2pm Eastern, Thursday, December 15th.

If you act before Tuesday, December 20th, you can get the bowl package for $149.

In addition to the above cards, we accept PayPal as well as JCB and Diner’s Club.

If you have any questions, contact us by clicking here.